Miyamoto Working on a New Zelda? 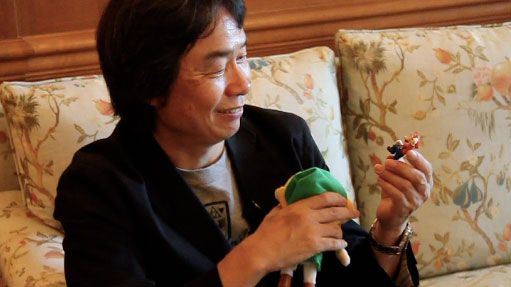 French website GameBlog.fr recently got a chance to interview Shigeru Miyamoto and with it we got a lot of new goodies. User mehdi_san, at the neogaf forums read through the French article and pulled out a few notable points about what was said.

—He’s busy working on a new Zelda, a new Mario, a new Mario Kart on 3DS, and a new Pikmin.
—There are new AR titles being prepared for the 3DS.
—They celebrated Mario’s 25th anniversary last year, and they intend to do the same this year for Link. He says there will be many products/merchandising (not sure about the translation on this, is he talking about games or CD/books?).
—About the “project cafe” rumors, he said they are always working on new hardware. He also added “where there’s smoke there’s fire”, but that “you shouldn’t believe everything you read [on the internet]”.
—Some boring stuff about smartphone gaming.
—He’s thinking about entrusting the younger teams with traditional characters such as Mario and Zelda, so he can get more time to work for himself.

One thing that stands out to me is the New Zelda that is mentioned, and there is more about it after the jump.

Using Google Chrome to translate the interview from French to English, this is the exact quote that is pulled from Miyamoto. (Note: This means that it was in Japanese, translated to French by this website, and then translated to English by Google Chrome, so feel free to question its precise accuracy.)

We must understand that our main job is to sell games. So personally I do not play as much as I want. I am currently very busy producing a new Zelda, a new Mario and a new Mario Kart on 3DS and a new Pikmin.

When he says new Zelda, I’m fairly sure at this point that he is not referring to Ocarina of Time 3d, since it has been noted that this game was NOT being developed by Nintendo. Instead, Nintendo allowed a young 3rd party developer named Grezzo to handle development of the 3D port. That being said, there is very little involved with the game that would require Shigeru Miyamoto’s involvement.

The next option that comes to mind is obviously Skyward Sword. However, from what we have heard from Nintendo, development on Skyward Sword is basically done. It’s simply a matter of putting final touches on it and preparing for release. It could very well be that Miyamoto is part of this process, but I hardly think this is the new Zelda title that he is referring to. In more recent times, Miyamoto tends to work on multiple titles simultaneously and is usually more involved during the earlier phases of development.

So what does that leave? A NEW Legend of Zelda title for the 3DS? Another remake of an old classic? A mutli-player Zelda title for the 3DS? With the previous statements from both Satoru Iwata and Reggie-Fils Aime, the Zelda Anniversary is going to be different than the Mario one. At this point, as crazy as it sounds, simply releasing Ocarina of Time 3d and Skyward Sword just doesn’t seem to be enough… since that is already what we are expecting. We’ve heard now from multiple sources within Nintendo that Shigeru Miyamoto is working on something for the anniversary. My thoughts, if I absolutely had to guess, is that we’ll be seeing another multi-player Zelda title, perhaps even a 3rd Four Swords game. However, this is just pure speculation on my behalf. E3 should definitely shine some more light on this topic.

So what are your thoughts on Miyamoto’s recent statements? What do you think this ‘new’ Zelda title is that he is speaking of? A brand new title? A remake? A new multi-player game? Feel free to post your thoughts in the comments below.