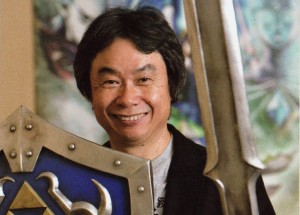 Shigeru Miyamoto and Eiji Aonuma recently showed us some gameplay for the upcoming Zelda game for the Wii U. While most people loved the look and are now more excited than ever for what the rest of the game could be like, other people expressed concern that there didn’t appear to be much to do in the overworld. One of the big complaints about Twilight Princess was that, although the was a vast Hyrule to explore, things to find were too few and far between which has led to a certain amount of worry that Zelda Wii U will have the same problem. However, YouTube channel iJustine has managed to obtain some information from Shigeru Miyamoto about what will make Hyrule worth exploring.

Take the jump for more info!

When asked about whether the player would plan on completing one mission but could end up doing several other things along the way, Miyamoto replied:

“Yeah, there may even be times where you forget what your goal is, because you are doing other things on the side. There may be times where you go in to one big one long dungeon, or you’re headed for a dungeon and doing other things on the side. What we’re trying to do is design it in a way where you don’t have to play it for a super long time, but more matched to today’s lifestyle where you can think for a little bit, and say “maybe I just want to play for a little bit today and do this one thing.” and get that thing done, then take a break.”

It sounds as though Zelda Wii U could be borrowing from Majora’s Mask in this respect. That game had so many side quests you could spend just as much time doing those as you could trying to free the four giants. I’ve seen numerous comments where fans have mentioned wanting more side quests, like in Majora’s Mask, so it could be that their prayers have been answered.

Check out iJustine’s video for the full interview.

What do you think of the possibility of more sidequests? Would they add to the experience or could they end up becoming an annoyance and getting in the way? Let us know your thoughts in the comments below.