Games in the Mario Kart series have always focused on one particular style of play: the way gamers can easily pick up and play together, and partake in the series’ mindless, chaotic fun. Unarguably, these were the design intentions that inspired the original Super Mario Kart on the SNES all of those years ago, in 1992. Of course, it’s entirely possible for any single gamer to pick up a controller and perfect their skills at Nintendo’s fan-favourite racing series, in the Grand Prix mode… but, let’s face it, Mario Kart games were never meant to be played alone, and that’s a staple that has existed into the series’ four-player compatibility in Mario Kart 64, doubling up in Double Dash!!, and connecting to the worldwide web on the DS. Simply, the series has always been about finding fresh, new ways to enjoy playing together. After all, it’s fun to play together!

Which is why it’s somewhat questionable that Nintendo EAD (collaborating with Retro Studios) had refrained from introducing any significant innovations into the series with Mario Kart 7. Of course, this doesn’t imply that the latest 3DS kart racer isn’t an incredibly robust game, and it’s not worth your time – far from it – it just means that, at this point, it’s clear that the series is suffering from allowing any new, significant ideas to revolutionise the franchise. Mario Kart 7 doesn’t do anything entirely new, but it has refined almost perfectly everything the series has stood for, since its inception. It’s for this reason that, if you’re a serious Mario Kart fanatic, or you’re simply looking for a solid game to bring some playtime to your Nintendo 3DS, Mario Kart 7 is an essential purchase in the genre and on the platform. 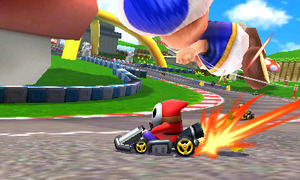 Mario Kart 7‘s most significant contributions to the series can be witnessed in the game’s online multiplayer modes – simply, Nintendo has never put out a better online title. With Mario Kart 7, it’s become evident that the once anti-online gaming developer has finally taken a hint from how gaming has evolved with the advent of gamer-oriented networks such as Xbox LIVE, and they’ve decided to test less-shallow waters in their attempt to sculpt an experience which avid online gamers will surely fall in love with.

If Mario Kart 7 has brought any major innovation to the series, it would undoubtedly be the online “communities”. Rather than having to add the friend codes of all of your individual racing buddies, kart-goers need only create an online community, and share the group’s invitation code with the party of players involved. It’s definitely a much more streamlined approach and it works wonders for groups of friends playing from their bedrooms on weekends, students in their dorms after classes, and online forums, such as ZeldaInformer’s very own. Any excuse to avoid having to input all those friend codes into your system is a good one, right? What’s better, is that each of these communities can adhere to specific rules of your own choosing. You want to restrict your races to the 150cc class? Or maybe you want to customise which items will appear during races? All of this is completely possible, with this very flexible, online gameplay mechanic.

The Mario Kart Channel has also returned, and it is now in-built into the software interface. This time, however, the usability of the channel has undergone a much-required simplification. Your 3DS system will fetch ghost data and community recommendations via SpotPass, and it will pick up others’ Time Trials data, while you have StreetPass activated. Handily, the notifications can be viewed from the 3DS dashboard, and they are presented in a tidy window-format from inside the Mario Kart Channel itself. Simply, the channel now works as a streamlined inbox for notifications from Nintendo as well as other players, and it’s made a significant improvement from the convolution of the channel we saw in Mario Kart Wii. It’s just another feature which will add to the user-friendliness of your Mario Kart 7 online experience. 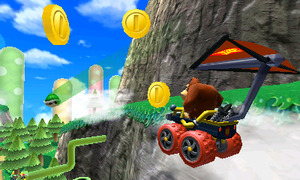 Naturally, a list of your past opponents becomes available after racing them, as well as a list of friends you’ve added via the Nintendo 3DS’ home interface. And of course, you can still choose to jump into a race with a random individual from anywhere in the world. At this time, the online user-base is bustling, so it won’t take you very long at all to jump into a race with a few karters from Japan, the Americas, Europe or Australia. Get in there while the competition is still hot!

And of course, there’s the exceptional track line-up. A new Mario Kart: how can you help but wonder which retro courses made the cut and whether the new tracks are worth more than a few laps? The answer with Mario Kart 7 is that the racetracks are some of, if not the best we’ve seen in the series’ history – it’s definitely the best course list we’ve had since Mario Kart DS, anyway. All the fun in the Mushroom Kingdom awaits you as you swing that Tanooki tail through the Retro-designed DK Jungle, cast fireballs in the Piranha Plant Pipeway, pull Lucky Sevens on the musical Melody Motorway, hand-glide through the grand Alpine Pass, and dive into the deep in Wario’s Galleon. Fittingly, Retro Studios were in charge of developing the retro courses, and their reinterpretation of Kalimari Desert, Luigi’s Mansion, Waluigi Pinball and Maple Treeway are worth all of your racing prowess. Having the option to zoom through these courses as your Mii, Shy Guy, Lakitu, Wiggler and even Metal Mario, and with customised vehicle bodies, wheels and gliders you earn through collecting coins on the racetrack… well, aren’t you already convinced that this is the strongest and most replayable entry in the Mario Kart series we’ve had in a few years?

It’s also worth noting that, even though Mario Kart 7 borrows its graphical style and presentation from Mario Kart Wii, it still presents itself like an absolute gem running at a rock-solid 60 frames per second, about ninety-nine per cent of the time – online, offline, with the 3D on and off. As well, the world in Mario Kart 7 looks splendid running through the new first-person perspective, and the gyro controls associated with it – though they’re somewhat less accurate than the slide pad, they work well enough, in the same way the Wii Wheel was useable but not preferable in Mario Kart Wii. I just can’t help but feel as though there should have been an option to utilise the first-person perspective racing without the gyro controls. Maybe next time, huh, Nintendo? 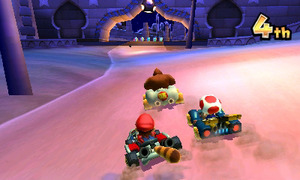 Did I mention the Battle mode is also online-compatible? Well you better believe it is, and the refined courses (including a few notable arenas from the series’ past – the N64’s Big Donut and the SNES’ Battle Course 1) combined with the option for item customisation, teams and hectic gameplay modes – Balloon or Coin Battle – make this one of the more enjoyable Battle experiences we’ve had in the series since Mario Kart 64. Dominating your foes with a well-executed green shell has never felt so good.

Actually, the fact that Nintendo has taken such a significant step in the online territory only makes me excited to see what they will try in the future with series such as Super Smash Bros. And in many ways, Mario Kart has always been Nintendo’s playground – a place in which they can experiment and implement new multiplayer ideas, to be utilised again in their other franchises. In the case of Mario Kart 7‘s online functionalities, these feats are entirely successful and they most undoubtedly make the game a must-buy for 3DS owners, fans of the series, and anyone in particular who’s just looking for a fun, multiplayer racing game that they can just kick back and enjoy, by themselves or with a few mates. The game is a wonderfully solid experience, with a challenging, blue shell-filled Grand Prix, plenty of vehicle parts to collect, ghost times to beat, and online opponents to take down.