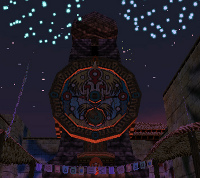 YouTube animating personality ScottFalco has created an animated fan trailer in homage to Majora’s Mask and to celebrate its re-release. ScottFalco, perhaps known best for his Pokémon animation regarding rare candies, his Dark Souls videos, his Robot Masters short series or maybe his very old (by internet standards) Zelda animations. Normally he makes animations that are a lot more whimsical, funny or have the serious dialogue offset by a humorous and unexpected ending, but this one is a by far his most serious and straight-faced work. Watch the animation after the break!

This was something I’ve wanted to make for a long time, originally it was gonna be out for the 3d release but work got in the way. I had always toyed with a Majora’s mask animation but I never felt a parody would do it justice. Majora’s mask was and still is my favorite Zelda, and I tried to capture why in this video. – ScottFalco

This video raises an interesting point though, a dark and sad one. You might even call it an uncomfortable truth regarding the reality of the game and heroism in general: You cannot save everyone. In Majora’s Mask a 3 day cycle is not enough to save and help everyone: you have to make choices. And each of those choices means that someone is not helped in some way. That, combined with the inevitability of things and that all you accomplish is meaningless once you go back to the first day, is one of the reasons why Majora’s Mask is the darkest Zelda game.

What did you think of the animation? Did you like it, was it too melodramatic or did it just not add anything new? Please share your thoughts in the comments!