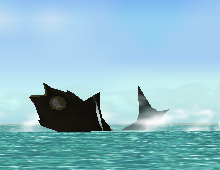 Ohhhh man, this one was a doozy for me. It always has been. As I said last time, the Snowhead Temple was the first dungeon in Majora’s Mask that I had to use a walkthrough to get through, but Great Bay Temple was even worse. In this dungeon, I very quickly ran into a wall and had to switch to navigating via walkthrough for pretty much the entire dungeon. That had never happened to me before, and it definitely damaged my opinion of the place. However, I’ve replayed it many times, and it’s certainly up for debate whether it executed its challenge well or not. But I’ll get to reviewing the level design and difficulty in a bit. First I was to review just… how weird the dungeon is.

Majora’s Mask is a weird game within the Zelda series. It feels like a strange deviation, and it fits in well with Adventure of Link and Link’s Awakening in this way (as Hanyou has written before). But I think there are few moments in this game that are as weird as the Great Bay Temple. A large part of the reason why revolves around the fact that the dungeon’s music is… techno?

What do you expect to see in a water dungeon in a Zelda game? Water! Duh. But, what kind of structure or additional themes would you expect? Would you ever expect an industrial pipe network, like a sort of water-processing plant, with mild science-fiction aspects? No? Wow, we’re really alike! What color am I thinking of?

I’m not sure any dungeon in the series has quite done what Majora’s Mask did by including this dungeon. And I’m not complaining about it; I love it when dungeons in the series experiment with thematic ideas, and Zelda has always had some odd bits of stylized technology (although admittedly this is the earliest major example of it that comes to mind). The music fits the strange themes extremely well, making the dungeon feel well… different than anything you’ve seen before. Clanging noises in the song suit the industrial building, weird electronic clicks sound like dripping and make the dungeon feel wet, and the general tone makes the dungeon feel dark, deep, and foreboding.

It’s neat that, in a bigger way than with most dungeons of the series, you anticipate the dungeon before you reach it. You see it off out in the water of Great Bay and wonder about its shape. There’s this constant element of anticipation, or even a bit of dread, as you work to find a way into that temple. The story of Great Bay surrounds the descendants of Zora sages and warriors, and deals a lot with their destiny to protect Great Bay from the evils that threaten it. These are the things that eventually enable you to reach Great Bay Temple, so there’s no question that there’s a lot of epic buildup to this one.

But it still can’t prepare you for your trek through a dungeon that feels more like an offshore drilling platform than a sacred temple. The dungeon has one of the most unique themes of the series, and unlike most, it doesn’t mix it with stereotypical stone walls; this dungeon is 100% its own thing, making it unusual even within the strange Majora’s Mask. The dungeon can also be quite scary if you remember that you’re way offshore, out in the ocean; the basement levels of the dungeon are below sea level.

When getting into the gameplay and dungeon design, the first thing that comes to mind is the fact that the dungeon is haaaaarrrrd. Or maybe it isn’t. I’m actually conflicted quite a bit regarding this dungeon.

The dungeon is very complicated, with a central element that runs throughout all the rooms of the dungeon and effects them all, sort of like the water level in Ocarina of Time’s Water Temple (though in a very different way). This central element is the pipes. There are three color-coded pipes which must be followed throughout the dungeon. As you open valves to let the flow of water continue through the pipe, it activates geysers and other contraptions. Room to room navigation is tricky, but this broader element makes the dungeon pretty overwhelming. ESPECIALLY when you have to deal with the central chamber and its whirlpool that prevents you from entering the second half of the dungeon unless you reverse its rotation.

On the other hand, the pipes are literally color-coded, and they are linear. You open the first valve and then you follow the same pipe to its end in one straight shot. When you’re done with one pipe, you move on to the next. If you get lost and don’t know where the beginning of the pipe is, the pipes even have arrows on them indicating the direction they lead, so you can still follow them back to their source. And they glow, or pulsate, when water passes through them. So there’s plenty of visual aid.

And yet, if you don’t know or notice any of these things, you’re screwed.

Great Bay Temple is supremely confusing in a monumentally frustrating and terrible way if you don’t grasp its guiding mechanic. But if you do… it’s hard, but it’s manageable. This is why the dungeon is so polarizing in terms of difficulty, because some people catch on and some don’t. I didn’t on my first playthrough. Or most subsequent playthroughs. In fact I’ve struggled immensely on this dungeon every single time I’ve gone through it until the last time I played it, shortly before writing this review. This time, I grasped the mechanic in its entirety and was able to effectively navigate the dungeon (and since I’ve never remembered any details from previous runs through Great Bay Temple, I really did complete the entire dungeon anew).

The game gives you enough hints to look at the pipes that I feel like I can’t criticize them for not making it obvious, although I’m very curious to hear who managed to figure it out, so please tell me in the comments. I still feel like it wasn’t clear enough, but I can’t decide if that’s bias or not.

There is one thing I would definitely fault the dungeon for, however, which is that getting around is a pain. When you enter one of the many side rooms that branch off from the central chamber, you’re literally sucked in and can’t get out until you follow it through to the end and return to the main chamber from there. In the early portions of the dungeon this isn’t so bad, but by the end you can find yourself in rooms you’re not supposed to be in yet because you haven’t opened up the valves on the right pipe. Even if you try to follow the pipe back to its source, you have no means of going back the way you came and must push forward until you get out, only to have to go through it all again once the valve is open. The dungeon is too unforgiving; you’re punished severely if you don’t understand the pipe mechanic and don’t do things in the right order.

The dungeon could have benefited from an easy way of returning to the central chamber, like a large pipe or drain with entrances interspersed throughout the dungeon. I suppose the Song of Soaring functions as this, but it’s still annoying getting from the entrance that it takes you to, back to the central chamber. So it’s not as good as it could be.

The dungeon is also too narrow most of the time to effectively navigate with the Zora Mask, and having to switch between Ice and Fire Arrows is a constant annoyance because, since the game seems to treat equipping them as equipping the bow, you can’t assign both to buttons at the same time.

The Stray Fairies are well-hidden and fun to track down like in Snowhead Temple, with one exception. There is a room where you can tell there’s a Stray Fairy with the Great Fairy’s Mask, but it can’t be reached until later when you reverse the whirlpool, and pass through — but do not enter — the room on your way elsewhere. This was poor design and it was frustrating trying to look for the fairy when you couldn’t get to it at all from that room. Aside from that, the Stray Fairies were great here and the reward is one of the best: half damage from enemy attacks.

For battles, you fight two great mini-bosses. Wart is a giant eyeball covered in a shield that must be pulled off with the Hookshot, a boss very similar to Arrghus from A Link to the Past and quite a fun, challenging battle (especially when he drops the shield and starts charging around the room). The Ice Arrows, your reward for winning, are used to freeze the water to create stepping stones or freeze flows. These excellent new mechanics for the Ice Arrows (it’s very nice to see them be so useful) come into play against the second mini-boss, the returning Gekko, as he comes into battle with a new partner. The Mad Jelly must be frozen and shattered so that Gekko can be attacked. Again, a fun fight, and it can be a bit tricky, though it’s not as hard as Wart.

Finally, after finding the Ice Arrows, reversing the whirlpool, and opening all the valves, it’s time to face the dungeon’s boss: Gyorg.

This “masked” fish (looks like his face to me, but hey, you’re the boss) is an extremely challenging fight depending on how you fight him. If you stun him from the platform with arrows and only dive to attack, he’s a piece of cake. If you try to fight him head-on in an underwater battle, he’s a thrilling, possibly frustrating challenge. This battle doesn’t offer as many options as Odolwa, but it still has plenty. You can shoot, you can swim, and you can duel him by stunning and striking from the floor of the pool as a Zora. There’s a fair number of options. He can be a frustrating boss, but very rewarding to beat. Just like the rest of the dungeon!

So, as I’ve said, I had an extremely frustrating time with this dungeon when I first played, and frankly didn’t have any fun with it. On later playthroughs I’ve learned to appreciate it, but I can’t shake the sense of it being poorly designed. But I can’t decide… is it poorly designed for being so unforgiving? Or is it well-designed, because it’s so hard but with a guiding element of the appropriate obviousness? I can’t decide. So instead I will tell you that whether or not you will like this dungeon… just depends.

So what about you? Was your first run through Great Bay Temple a living hell? Or was it easy enough and enjoyable? How did later runs go, and what’s your overall opinion of it? Tell me in the comments! Especially tell me if you were able to figure out the pipe mechanic! And look forward to next week when I review Stone Tower Temple!