Magic vs. Technology in Zelda

One big subject that comes up when talking about the rise (or downfall, depending on how you look at it) of The Legend of Zelda is the concept of magic. Magic is obviously one of the things that defines the Zelda franchise and makes it exciting. Some games were filled with spells, while others made use of mysterious items with arcane powers. Fairies, Wizrobes, maze-like woods, and items that start with the word “magical” are all prominently in Zelda games. Bottom line: magic is awesome. But many fans have asserted that magic played a huge role in the early games, and that its use has gone down dramatically, only to be replaced by technology. Sounds alarming. I’d like to take you through this and give you my thoughts.

The original NES hit, The Legend of Zelda, was not only a breakthrough in gaming but a memorable adventure that fascinated us. Part of what made this game memorable was that it was filled with magic and wonder. Your inventory included such mystic items as a magic wand (upgradeable by a book of magic), a pair of colored rings that enhanced your life, and even candles that somehow shot out fire. Because of the primitive graphics, a lot of the action took place in your imagination. This made the mystical quality of the game much greater than today’s games, where everything is shown to you plainly. The next game, the Adventure of Link, changed the formula quite a bit. While there weren’t many magical items to go around (or items in general…), Link’s second adventure introduced the magic bar and gave you an arsenal of spells that you could use at your leisure. A Link To The Past took this a step further by adding the magic items and the magic bar. You had so many new items to work with, including a few optional items like the ice rod, that magic was more prominent in A Link to the Past than in any previous Zelda games.

So let’s recap. The Legend of Zelda, Adventure of Link, and A Link To The Past were all filled with magic. Many fans cite them as the peak of Zelda’s use of magic, and the lowest point of technology, but we’ll see about that.

Next, amongst a slew of fun handheld titles, we got the first two 3D games in the series. Ocarina of Time was arguably the biggest game in the Zelda franchise, and it brought lots of magic with it. We had items like the Fire, Ice, and Light Arrows, the Lens of Truth, Magic Beans, the Mask of Truth, and much more. We even got a few magic spells to play with to boot, something that hadn’t truly been seen since Adventure of Link. So far, we’re not missing much magic. Majora’s Mask, a controversial game with a cult following, came next. The magic is still there. Sure, it borrowed most of the core items from Ocarina of Time, but they’re still just as magical as last time. You also got a huge collection of masks that performed many arcane feats, such as transforming you into other races, preventing you from sleeping, or communicating with the dead or with animals. Again, not much magic is missing.

However, Majora’s Mask might mark a point where technology stepped in, at least in a subtle way. The Pictobox, a device for snapping photographs, and the Bombers’ Notebook, which looked like something that came out of a printing press, were both in the game. There were also clocks all over town that seemed to work on their own with no help from a pendulum. This might suggest that Termina’s society is more technologically advanced than Hyrule’s. 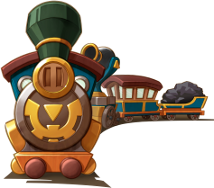 Once gamers finished off Majora, it was time for the Gamecube to arrive. Gamers soon got their hands on The Wind Waker, and they discovered that there was more technology in this creation. Sure, there was the Pirate’s Pendant, the whole “controlling a seagull” thing, and the Wind Waker itself, but a few fans couldn’t get past the Tingle Tuner or the enhanced Pictobox. By the time Phantom Hourglass came out, more people knew there was something wrong. Link was now the navigator of a steamboat, and there weren’t many magical items to go around. This only worsened in Spirit Tracks, when Link was the conductor of a train.

Personally, I don’t think the huge roles of technology in the Wind Waker saga is a bad thing. Why? Because The Wind Waker and its sequels are set in the future. It’s been a long time since most of the previous games. No matter which timeline you’re looking at, The Wind Waker is certainly long after Ocarina of Time, as it tells you right from the beginning. I think it’s reasonable to assume that science and technology have advanced along the way. I do agree that the concept of magic has dwindled in Phantom Hourglass and Spirit Tracks, but it hasn’t disappeared completely. Look at the Ghost Ship, and Tetra being turned to stone, the Tower of Spirits, and many other mystical concepts. It’s not like these games are Sci-Fis. I also think the dwindling of magic in the Toon Link saga plays a role in one of the games’ central themes, which is that the fairy-tale world of Ocarina of Time is long gone and has become legend.

And don’t forget about Twilight Princess. This game is set long before The Wind Waker, and the magic/technology ratio really shows. Gone are the trains, steamboats, pictoboxes, and other gadgets. Twilight Princess has a suit that lets you swim like a Zora, a set of armor that makes you invincible (for a fee), a city in the sky, light spirits, the Dominion Rod, and the concept of the Twilight Realm. Twilight Princess has a good amount of magic (minus the magic bar), and it was made only a year before Phantom Hourglass.

Besides, Zelda at its core is magical. You can’t remove these concepts from Zelda, or else it ceases to be Zelda. Fairies, Goddesses, the Triforce, spells, magical instruments, and many more elements are part of Zelda’s DNA, and they’re here to stay. I don’t think there’s any reason to worry, and I don’t think Zelda and magic are going to split any time soon.

What do you think? Do you agree? Disagree? Do you think there will be more or less magic in Zelda Wii? Tell me in the comments!