Posted on November 30 2015 by Brandon Schmitz 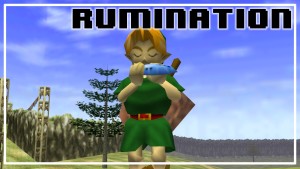 Since 2012, Lorerunner — formerly Archengeia — has been my favorite YouTube personality. With his minimalist approach to production, he excels through pure commentary. The guy’s insightful interpretations, coupled with his infectious enthusiasm, often have me revisiting particular games with a fresh perspective. Throughout the past several months, he has been exploring the underlying themes of each individual Zelda title. This past week in particular has seen the release of ruminations on both Ocarina of Time and Majora’s Mask. Each discussion clocks in at nearly an hour and a half, but they’re definitely worth listening to. Theory crafters and lore aficionados, especially, should find a lot to love. Check out both videos after the jump.

Although there are a ton of theories regarding the specifics of the Hyrulean Civil War, Lorerunner offers some unique insight in terms of how it relates to Ocarina of Time. Despite how relatively lighthearted the game appears, he suggests that there’s genuine darkness burrowing underneath most of it. The bottom of the well and, in turn, the Shadow Temple, is perhaps the best example of this, given the literal darkness that stirs underneath Kakariko Village. So many of the finer details of Zelda’s mythos are left open to interpretation. That said, I love the notion of Bongo Bongo’s instrument being a war drum, and the creature itself being an amalgamation of those who died during the civil war.

Lorerunner’s Majora’s Mask analysis is equally fascinating, especially when it comes to the theme of metaphorical masks. Admittedly, it hadn’t occurred to me until he brought it up, but a good portion of that game’s cast seems to boast some kind of facade. From Tingle’s delusions about being a fairy to the Clock Town swordsman’s feigned heroism, it definitely seems like a pravelent theme.

What do you think of Lorerunner’s ruminations? Is there a particular point that he made that stuck out to you? Share your thoughts in the comments below.