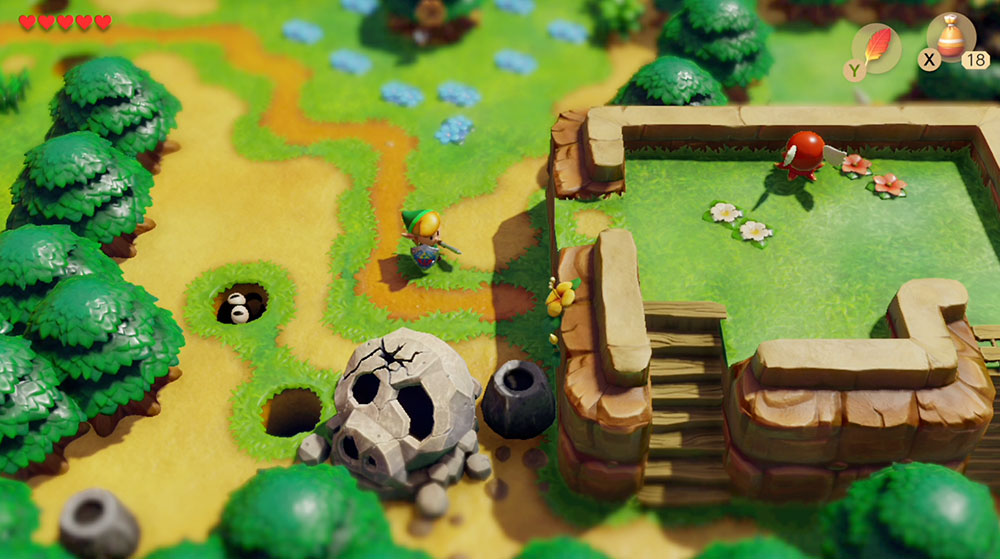 When I first saw The Wind Waker as a kid, I absolutely loved the visuals; though many others was aghast by them. I have always believed that taking a more out-of-the-box approach with a game series is a chance worth taking for a developer. That’s why I absolutely adored the visual style of the Link’s Awakening remake when it was first unveiled earlier this year. And as it turns out, the decision behind this visual direction was made for a good reason.

In a recent behind-the-scenes discussion released by Nintendo, Link’s Awakening graphic refining director Yoshiki Haruhana talked about the reasons behind the remake’s unique graphical style. Instead of going with more traditional HD graphics, the development team decided to go with something different:

Haruhana: …our approach of revamping the graphics was to make sure that we didn’t make them feel ‘forced’. Instead of recreating the game with very modern graphics, we aimed to capture the simple universality that the pixel graphics of the time had. I hope that each person playing the game will project their own idea of Link’s Awakening onto the game as they play.

Once that was decided, Haruhana’s visual team then determined what, if not “modern graphics”, direction they would go in. As it turns out, their goal was to make the game feel like a rather interesting artistic format, a diorama:

Haruhana: We also aimed to make the game world feel as though you’re peeking into a little diorama. Our vision for this game during development was to create a diorama world in which Link would be a 10cm-or-so tall figurine. We developed the game while imagining the world as if it might actually exist in miniature form, and so we aimed for a balance between two really contradictory ideas; to pursue the charm of a richly detailed creation, while also considering the scale we’d imagined for Link and being careful to avoid adding in too much detail beyond that. It turned out that finding this balance was much easier said than done!

Haruhana even recounts the moment he found out that an actual Link’s Awakening diorama would be on display at Nintendo’s E3 2019 booth. Suffice to say, he was a bit nervous and excited about it at the same time:

Haruhana: Speaking of dioramas, it ended up that an actual diorama was displayed at E3 2019! The local staff worked incredibly hard and produced something truly spectacular! I was impressed with how well it turned out. When I first heard they were going to create a diorama, I was a bit anxious as it felt very much like a test for whether we’d achieved what we set out to with the game’s graphics. However, the beautiful craftsmanship was reassuring in that we’d made the right decisions, and it was really encouraging as we entered the final stages of development.

What are your thoughts on the graphics chosen for the Link’s Awakening remake and the decisions behind them? Let us know in the comments below.