Linkle Confirmed to be in Hyrule Warriors Legends! 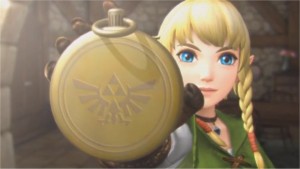 There has been plenty of theories regarding “Linkle”, a girl who looks a lot like Link, ever since her first appearance as concept art in Hyrule Warriors‘ art book. Who is she? Is she related to Link? Will she appear in a Zelda game? Well, as of the latest Nintendo Direct we know the answer to that last question. Alongside Tetra, Toon Link, the King and Skull Kid, Linkle makes her appearance as a new fighter in Hyrule Warriors Legends!

Watch the video of her reveal after the jump!

Linkle lives in a village with a lot of Cuccos. She wields double crossbows instead of Link’s sword and shield. But she does have a spin attack of her own: a great spin kick that takes down enemies around her much like Link’s spin attack does. She wears green much like Link, but her outfit is more of a cloak in contrast to Link’s tunic. She does share his golden hair (at least in this game) and large blue eyes. She also has some kind of compass that may or may not tie into the plot, but the how and why remain to be seen.