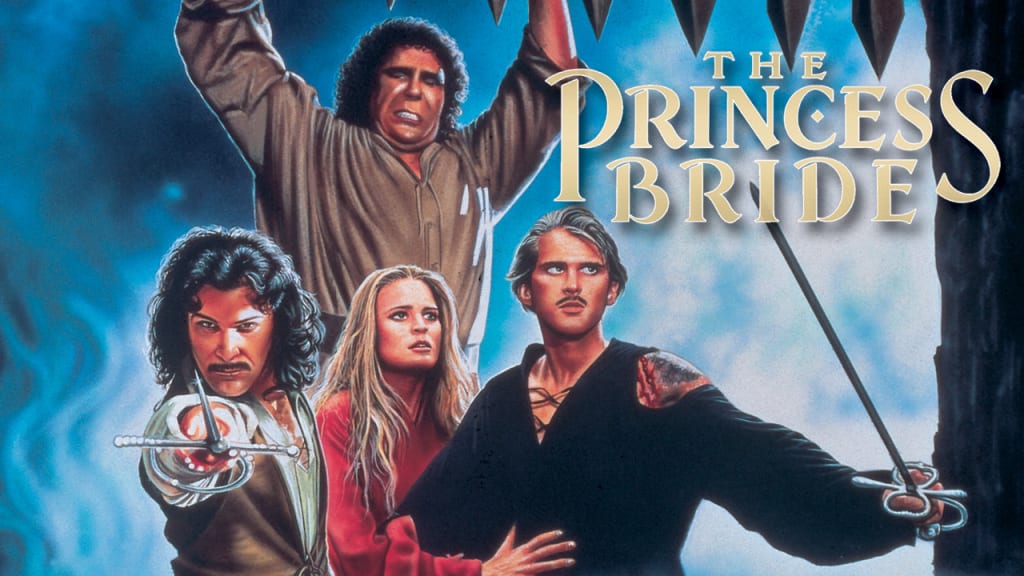 The Legend of Zelda is a franchise that knows just how to tell a story. A brave hero battles through the forces of evil in an effort to save a beautiful princess; it’s a tale as old as time. The Zelda games put this tale into action, allowing the player to experience the hero’s adventure first-hand. Whats more, as the series progresses, the adventure incorporates all sorts of iconic elements to dramatic, tragic and sometimes comedic effect. The end result means that Zelda titles and their storylines remain timeless yet relatively fresh. This isn’t something so easily done with a time-old tale, but the formula works. And the proof isn’t just in the proverbial Zelda pudding, it’s out there in other forms of entertainment as well — take The Princess Bride, for example.

The Princess Bride released in 1987, just over a year after The Legend of Zelda hit the shelves. Back then, Nintendo didn’t have the resources in place to showcase a truly theatrical display of heroism, but the film industry did. The box office brought the daring exploits of its hero Westley to life, much the same as Nintendo would improve at with Link as technology advanced. But, differences in technology aside, the similarities between the characters and overworld are what brings both titles into comparison. 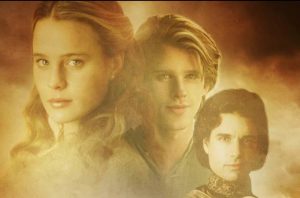 Akin to Link in Twilight Princess, Westley’s tale begins when he is a simple stable-hand during medieval times. And just as often happens to our favorite hero, Westley is thrown into adventure! He sets out into the big, wide world in the name of love and everything progresses from there. When we next see him, some time has passed and he has grown in size and skill. This is something all too familiar to Link, who starts his journey in some naivety, but becomes stronger as any Zelda game progresses.

Now, if there is a hero, there has got to be a princess. Parallel to The Legend of Zelda‘s own Princess Zelda, we have Buttercup in The Princess Bride. Although Buttercup comes from a common family, she is raised to the title of Princess upon her impending and unwanted royal marriage. She is depicted as a helpless maiden, whose main role is to be rescued, just as Princess Zelda often was in earlier Zelda titles.

So, if there is a hero and a princess, obviously there is a villain. The Zelda series’ most infamous villain is Ganondorf, and one of his most famous acts is the betrayal of the Royal Family of Hyrule in Ocarina of Time. In a similar fashion, The Princess Bride‘s Prince Humperdinck plans to betray his neighboring country, Guilder, by blaming them for Buttercup’s murder. It’s all political, but these two bad guys certainly think alike!

In a nutshell, The Princess Bride has its own “Triforce” of characters. Bring them all together in the medieval land of Floria and you might find yourself looking at a distorted version of Hyrule. The protagonists even journey through a Fire Swamp, facing overgrown rodents, spurts of fire, and a special form of quicksand. If that doesn’t sound like something you would come across in Hyrule, then it beats me! 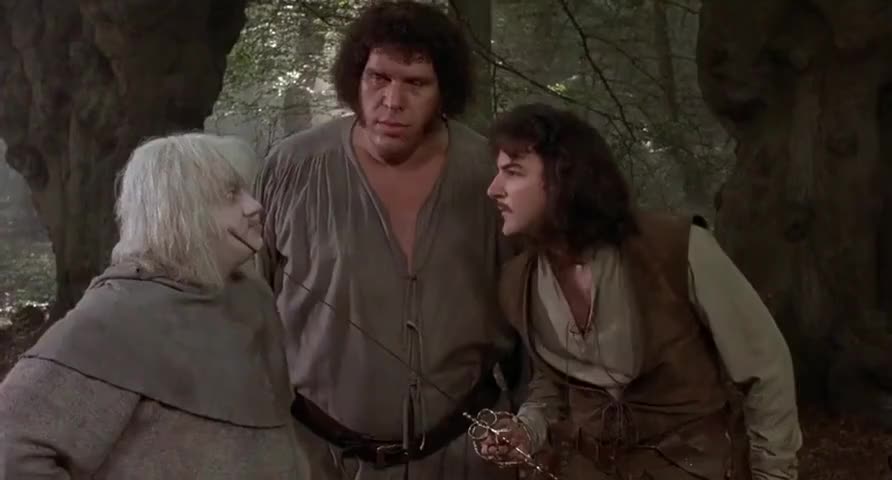 Moving on from the obvious comparisons between characters and overworlds, I want to focus on comedic effects of both the film and The Legend of Zelda. The Zelda series isn’t famous for its laugh-out-loud moments, but like it or not, they do exist. For me, one instance that sticks out is when the Goron leader, Darunia, gets his groove on in Ocarina of Time. I literally burst out laughing as I watched this at first! It was just so unexpected and hilarious, especially with Darunia’s exaggerated expression of enjoyment! This unprecedented injection of physical comedy made the action-packed game lighthearted and rather special. In fact, moments like these became some of my favorites in all of the games. Particularly, I would consider Groose’s fall to the Surface in Skyward Sword comedy gold! Link’s reaction was just fantastic!

Now, if you have seen The Princess Bride, then I don’t have to tell you that it’s physically hilarious. Every character has exaggerated manners and a smart or funny punchline. This movie has a flamboyant sense of comedy, offering the same type of whimsical playfulness that the Zelda series has incorporated, but on a much stronger level. Simple actions, such as when the giant Fezzick uses his brute force to take people out, will really appeal to fans of physical humor. 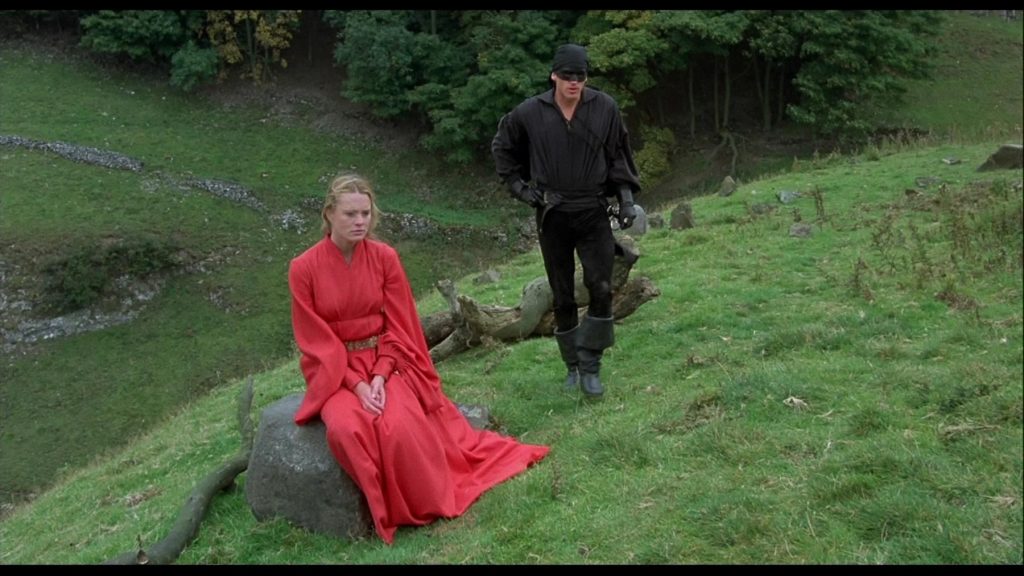 Surprise turns and irony are another form of comedy that The Princess Bride and the Zelda series have in common. This type of comedy isn’t for everybody; in fact, I’ve only recently began to appreciate the subtle nuances of this type of entertainment. As a child, I simply believed surprise turns were more dramatic than comedic.

A great example of a surprise turn in The Princess Bride comes in the form of Westley in disguise as the Dread Pirate Roberts. Early in the plot, Westley appears before Buttercup, who doesn’t recognize him at all. It takes Buttercup’s attempt to harm him to make Westley finally reveal who he really is. The farce of this play is that Westley’s identity should have been obvious to the audience, even though it wasn’t to the character. The same parallel is drawn from Princess Zelda during Ocarina of Time.  Zelda, in the guise of Sheik, hid her true identity from Link until the time was right. But many gamers had already drawn this arguably obvious conclusion before the big reveal even took place. 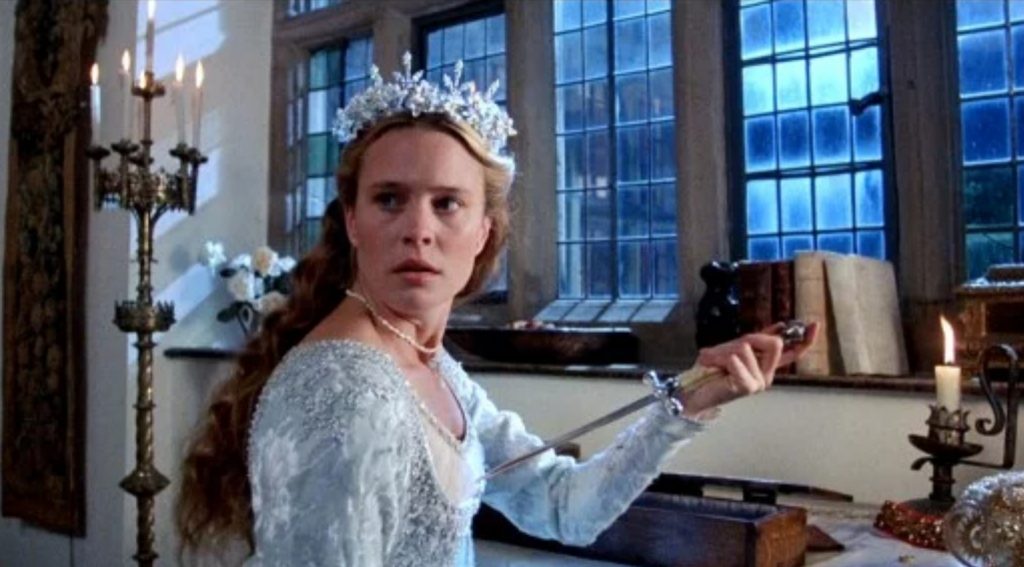 Wit is also a huge make-up in the comedy of The Princess Bride. Most of the wit, be it remarks or unexpected actions, tends to come from Westley himself. He always has a smart comeback or unexpected move to entertain the audience.

One of Westley’s more unexpected actions is to lie in Buttercup’s bed, awaiting her return from her wedding ceremony. Buttercup believes that Westley is dead at this point, and she doesn’t want to go on without him. But just as Buttercup is about to end it all, Westley draws her attention. He points out that with a certain shortage in the world, it would be a shame to damage her perfect attributes. Now, the funny side of Westley’s actions and speech here may be lost on a younger generation, but I’m sure that some of the more mature audiences can appreciate this form of wit!

Although the Zelda series doesn’t focus largely on witty dialogue, and certainly not the same type that we have just discussed, it still exists in the games.  Some of the wittiest characters in the Zelda series include Midna, Lineback, and even Navi, in her own way. I consider Navi’s comment on Hyrule’s fate depending on such a lazy boy at the beginning of Ocarina of Time to be some of Zelda‘s more classic witticism.  This comment alone resonates with many Zelda titles, where Link’s appreciation of sleep is somewhat of a staple in the series. 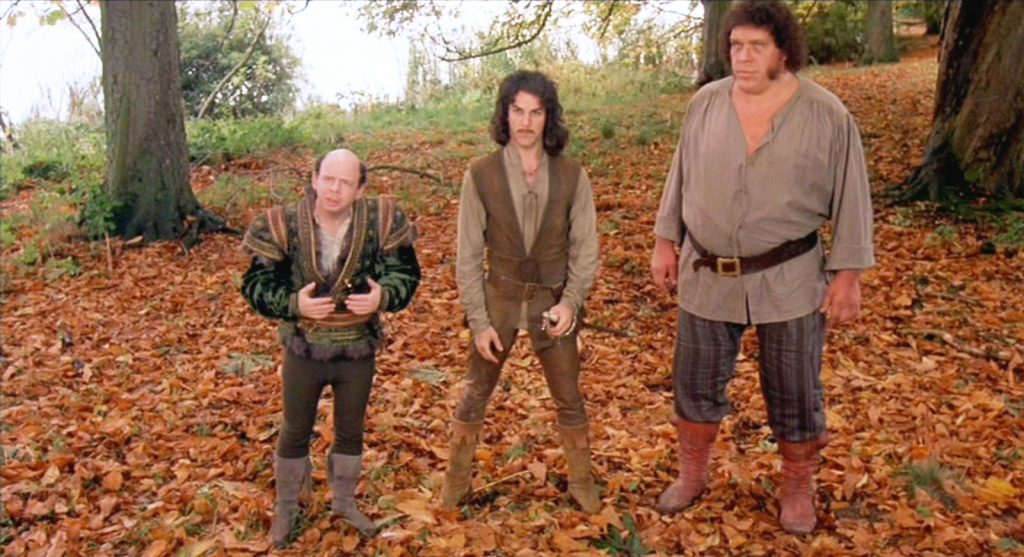 One of the more recent comedic comparisons that I have been able to make between The Princess Bride and the Zelda series comes from the parody of villains. The film features a trio of farcical sub-villains that are hired by Prince Humperdinck to kill Buttercup; we have the bossy and narcissistic Vizziny, the giant Fezzick, and the absurdly roguish Inigo Montoya. Though threatening our heroes with violence and treachery, these antiheroes each display some degree of ineptness, and they are each swiftly dispatched by Westley. They call into question the very idea of villainy!

Master Kohga from Breath of the Wild reminds me of this type of parody in The Princess Bride. The Yiga Clan Leader’s attributes make his higher position seem laughable, at least until he gets down to business. The same goes for Vizzini; his size and stature made it difficult to take him seriously, even though he represents a mini-boss of sorts. I found it particularly funny when his frustrations lead him to cry, “Inconceivable!”, which soon became one of the more famous quotes from The Princess Bride. 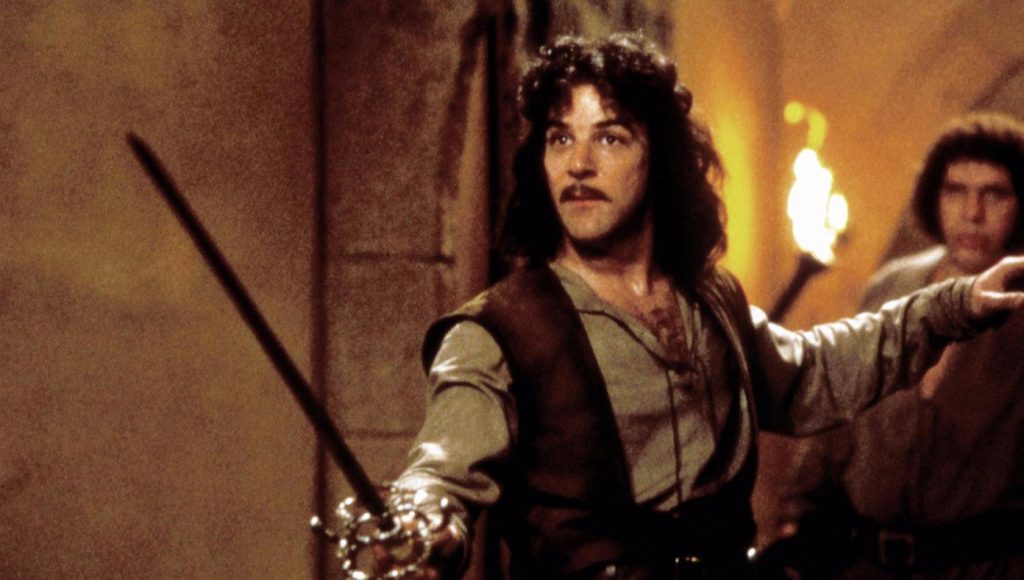 Talking of quotes, that’s just another thing that brings these two titles into comparison. Another character from The Princes Bride utters arguably the most memorable quote of the movie:

Hello. My name is Inigo Montoya. You killed my father. Prepare to die.

Inigo Montoya voices these famous words, and his story is quite the tragicomedy. Inigo’s very existence is based on avenging his father’s death, so he pushes himself to become a remarkable swordsman in order to defeat his father’s killer. But eventually, tired of searching for his nemesis, Inigo becomes a drunk and falls in with Vizzini instead. The movie manages to mock Inigo’s plight by making him repeat his mantra to the point that the audience can’t help but enjoy it.

This reminds me of our very own Tingle from Majora’s Mask. Although he isn’t out to avenge a murder, Tingle’s story is a tragicomedy of its own. Tingle waits around as the moon looms above him, ever ready to destroy his world. He waits patiently for a fairy companion to come to him, with no other real drive for life. But, it’s obvious to anybody even remotely familiar with the Zelda series that Tingle is deluded. Thus, he is often viewed as the laughing stock of the franchise. Tingle has his own “magic words” which form perhaps one of the most famous quotes in the Zelda series: 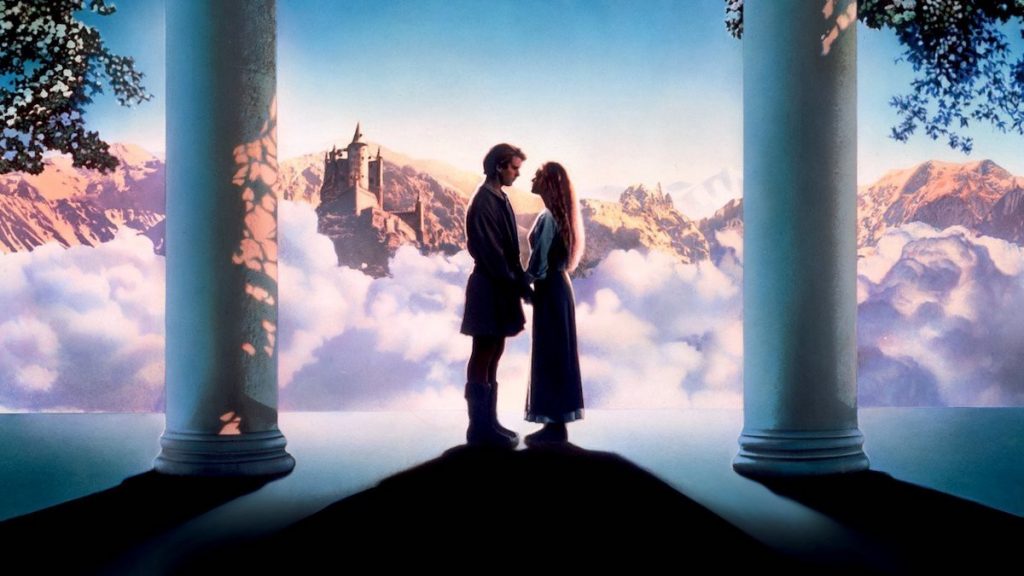 The Princess Bride ends on the same parallel that we have come to expect from the Zelda series. All is well — unless you count the downfall timeline, that is! When the villains are vanquished, and witty comebacks no longer serve a purpose, the protagonists are free to live happily ever after. So, this leads to my final comparison between these two titles: both have replayability. I keep coming back for more in the Zelda series. It offers all of the drama, the tragedy, and, of course, the comedy that I could possibly ask for. And The Princess Bride? Well, it does exactly the same thing; so of course, I’m going to watch it all over again!

To draw a conclusion, The Princess Bride is now revered as a cult classic, and just like the iconic Zelda series, its story remains delightfully fresh. From the eminently quotable elements to the dramedy, it’s easy to understand why fans return to this post-modern fairytale time and time again. And for Zelda fans on the look-out for a movie to hit that sweet spot, this really could be it!

Judy Calder is a Copy Editor at Zelda Dungeon.  She takes care of the Fan Fiction Friday series on the site, which explains her love of a good fairytale.  You can follow her on Twitter here.