The Legend of Half-Life: A Voice for Zelda

Posted on August 23 2008 by Nathanial Rumphol-Janc

A certain YouTube video came to my attention involving two very iconic video game titles. The footage contained the opening game play of Half-Life 2: Episode 2 with one minor tweak. Alyx Vance, a major character in the Half-Life series, was missing and in her place was none other than Princess Zelda. This was a revolutionary change for both Half-Life and The Legend of Zelda, one that hopefully will not go unnoticed by Valve or particularly Nintendo. This spectacular discovery inspired me to seek out this mod and find out more. 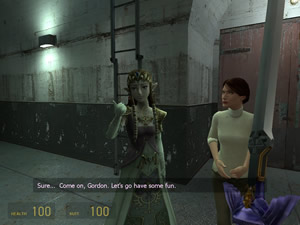 Half-Life 2 Modifications using the Source engine is nothing new. Since Half-Life 2 launched in 2004, people have modified the game to build their own creations and post them online. This community of programmers was unknown to me until just recently when freelance programmer FluxMage posted his recent work on the Facepunch Studios forum. He directed the forum to garrysmod.org to download this latest mod. The first was for Half-Life 2 which also works with Half-Life 2: Episode 1. However, in order to play Half-Life 2: Episode 2, it required a different mod. Both files download a zip file that must be extracted before use. Once extracted, both mods come with an easy to follow Readme file that explains exactly what to do. Following the instructions was actually very easy, but for such drastic changes, it was concerning that perhaps it was too easy. Take note that there is another modification available to replace certain NPC soldiers with Zelda, but my decision was not to test this mod at this time. After maybe a half hour of searching and setting adjustments, Half-Life 2: Episode 2 started up and successfully displayed Zelda as Alyx, to my relief. After this confirmation, my decision was to leave the game and start playing Half-Life 2 from the beginning in order to get the full experience.

Now before getting too far ahead, there was one other mod found in the same forum thread at Facepunch Studios. After what appeared to be a few sarcastic comments from forum members about adding the Master Sword to the game, member Bill Ding posted an already existing mod replacing Gordon Freeman’s crowbar with the one and only Master Sword. This file works for all three Half-Life 2 games, and is installed similarly to the Princess Zelda mod.

most of you can tell, this particular Zelda model is from the Nintendo

game The Legend of Zelda: Twilight Princess released in 2006 for the

Nintendo Wii and later for the Nintendo GameCube. Players have been

rip early copies of music and sound effects, but having someone take a

completely different type of software engine was something far from my

mind. Translating these files must be very complicated, but someone

smarter like FluxMage could explain it better. Regardless, the work one

has to put into this kind of project must be quite a task.

those who don’t know, the Half-Life series takes place entirely in

first person view. There are no cut scenes in the entire series, so the

player is in control of the protagonist, Gordon Freeman, from start to

finish. This works surprisingly well with the character mod because

adjustments will work throughout the entire game without being

interrupted by any high definition cutscenes, which would be far more

difficult to modify. The point is, of all the computer games to modify,

beginning a game of this modded Half-Life 2, it can be a bit nerve

the first chapter, and since the files for the Episode 2 mod were

different, it was hard to tell if the mod was working. Being my third

time to play through the game, it didn’t take me long to find Alyx, and

of course, there she was. The first time the player sees Alyx, she gets

right up on screen, and the Zelda mod looked, well, perfect. Nintendo

couldn’t have done a better job if they made Half-Life themselves.

and facial expressions all nicely matched what the regular Alyx would

have done in her place. Wait, what was that? Zelda with voice work?

That’s not allowed is it? Well, to be fair, Twilight Princess did have

moving lips in Twilight Princess during text, but that model version

was never designed to match lip movement to voice work before. Well

here she is, and she’s talking, flawlessly. Really makes me wonder why

Dandridge’s voice for Alyx may not be a perfect voice match to Zelda,

judge. If anything, Alyx’s voice may be a little deep for Zelda, but

decide for yourself. While Zelda’s performance is on par with Alyx,

there are a few mistakes every now and then. For instance, Alyx had

her head, her eyes can occasionally roll back into her skull, showing

nothing but white eyes. However this doesn’t occur often. Another

small, but notable problem is when Alyx wipes her face. Sometimes,

especially in Episode 1, Zelda’s hands will bleed into her face in

these instances. Similar problems occur when Alyx interacts with other

characters like her father or Alyx’s robot, Dog. Most of these minor

flaws are not that noticeable, but they are there if you are nitpicking.

we all know, Zelda wears a large extravagant dress. It helps signify

that she is a royal princess of Hyrule. Alyx on the other hand has

grown up in a time of war, where dresses were not quite as in style.

Alyx wears the same pair of jeans and a jacket throughout the series,

wardrobe. So a large dress trying to mimic a skinny pair of jeans can

create complications to say the least. When in combat mode, meaning

when Alyx follows Gordon anywhere he goes, there really aren’t many

walks in a more casual pattern than as a running soldier. Her boots can

sometimes bleed through her dress out the back with every few steps.

This is once again, nitpicking, but it can be a bit more noticeable

than other problems. Also, Zelda isn’t very good at sitting down.

Especially in Episode 2 during the numerous driving sequences, Zelda’s

big dress doesn’t quite fit into the car all the way.

are other examples, like when she leans against something, or sits on a

couch next to her father, but these still aren’t that big of a deal.

They are noticeable, yet understandable. This is a mod after all. If

you really have a problem with these kinds of glitches, just remind

yourself you are driving a car as Gordon Freeman, fighting off the

Combine army with Zelda in shotgun holding a shotgun. Try to show a little enthusiasm for such an unlikely scenario.

in the Half-Life universe may appear a bit odd, once the initial shock

subsides. Obviously, Zelda is a little bit of a different art style

than what is presented in Half-Life, but with all the lighting and

shading, she still works very well with the source engine. The special

lighting affects like during the teleportation sequence still work the

same and she will still appear on monitor screens when appropriate. The

gets a message from Alyx over an old radio/television screen.

segment was supposed to interpret a poor signal with a lot of static.

My guess is the television just flipped through several still pictures

of the unmodified Alyx to give off the impression. For three games

though, this was the only glimpse of the real Alyx, which is really

good considering how much face time Zelda gets instead.

going over most of the ups and downs of Zelda, let’s talk about the

Master Sword. First of all, unlike Link, Gordon is right handed, so he

does use the Master Sword with his right hand. Not a big deal, but it

the entire game please). The big problem unfortunately is the lighting

with the sword. In still pictures, the sword looks pretty good, but

during the game, color surfaces constantly flicker while the object

tries to reflect the lighting. The effort put into this mod is not

nearly as well done as the Princess Zelda Mod, but there is still a lot

of fun to be had. At the start of Half-Life 2, when weapons are fairly

scarce, the player may have a stronger tendency to use the sword more

than usual. It was hard to remember that the mod was still just a

a fully armed Combine soldier with such a primitive weapon. This isn’t

a great mod, but it nicely compliments the Princess Zelda mod.

experience. The Legend of Zelda series has always been phenomenal, and

the same goes for Half-Life, but putting these two forces together was

like a gift no one would ever imagine. I highly recommend replaying

your copy of Half-Life 2 with these memorable changes, and if you

haven’t played the Half-Life series before, here is yet another reason

to pick up this game. If Princess Zelda isn’t quite your thing, then

mod which functions the same as the Princess Zelda version. Sorry if

you bought a console version, because these mods were not made for

them, yet, but let’s be honest, you’d have to be pretty desperate to

even play Half-Life with a console controller. Believe me.

is so much to take away from this experience, but the one thing that

stuck out in my mind was Zelda finally getting a voice. This left me

thinking ahead to the next installment for the Zelda franchise, because

sooner or later, rumors and announcements of the next game will be

heard launching months of speculation. After playing Half-Life, I now

acting. After having Zelda speaks as Alyx Vance, there is no

justification for going back to text boxes.

these past experiences for several days, Twilight Princess has become

all the more disappointing. Why the lack of voice acting? Their lips

moved and characters, like Midna, even made nonsense noises during

their speech. Why did Nintendo neglect to read those text boxes?

Remember back in the Nintendo 64 days? They had full voice acting for

Star Fox 64 way back when on cartridges, so how come nearly two console

to hire a few voice actors to read the text boxes for us, which was a

Link doesn’t talk, right? And it would be too weird to have so many one

sided conversations. Well, after playing through Half-Life 2 you should

know that it can work. Gordon Freeman has never said a single word in

his entire series, and yet nice portions of these games are filled with

dialogue. In Metroid Prime 3: Corruption, many characters engage in

conversation with Samus Aran while she also remains completely silent,

yet in neither case do these characters ever feel out of place. These

voiced environment. So why is Zelda still so far behind in comparison?

already hired some. Voice actors record sound effects for each

character, including Link. They never actually say any words, mostly,

obvious opportunity, which left someone to pick up the pieces by making

When the next Legend of Zelda

title comes around, someone at Nintendo needs to take a few notes from

64. It is about time we get to hear Zelda speak. For those of us who

can’t wait for Nintendo to progress, we have FluxMage to thank for

making not just a Half-Life mod, but an entirely new experience never

before seen by Half-Life or the Legend of Zelda franchise.