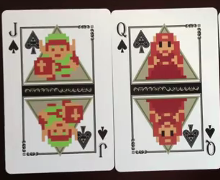 A couple of months ago we had reported that Nintendo would be releasing an official deck of Legend of Zelda playing cards in December for Japan. December has come and gone and now these cards are available in Japan. One particular person here in the United States named John had a set of them shipped to him from his friend in Japan. He recorded a video showcasing each card that comes in this deck. He also took some high resolution photos of the cards that he has on his website.

To see the video and the link to the high resolution photos, please take the jump.

I think these are some pretty sweet cards and after seeing these photos and the video it makes me really want to have them in my possession. Too bad I don’t have the money to import them though. As far as hearing that there’s going to be a US release for these cards, we haven’t heard anything yet, but I’m hoping that they do decide to release these over here cause I’d be one of the first people buying them.