Posted on December 06 2014 by Fernando Trejos 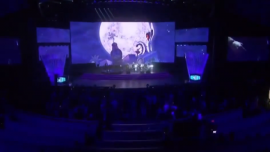 Tonight at The Game Awards 2014, after the awesome footage shown off for Zelda U, the show capped off with a beautiful Zelda suite featuring Majora’s Mask 3D footage and music, with series composer Koji Kondo and rock band Imagine Dragons on the stage. It was an awesome ending to a surprisingly good show, and definitely showed off how important the Zelda series really is in the world’s view; this is one of the biggest gaming events of the year, and it was all leading up to the finale with the Zelda U reveal and the performance.

The song itself featured Koji Kondo on the piano and the members of the band on guitars and violins, and consisted of a medley of Zelda’s Lullaby, the Song of Healing, and the Overworld Theme, which then rolled into an original piece named “It’s Time” by Imagine Dragons.