Koei Tecmo Developers Discuss the Freedoms and Challenges in Working with the Zelda Team to Create Hyrule Warriors: Age of Calamity

Posted on November 28 2020 by Brittany Lindstrom 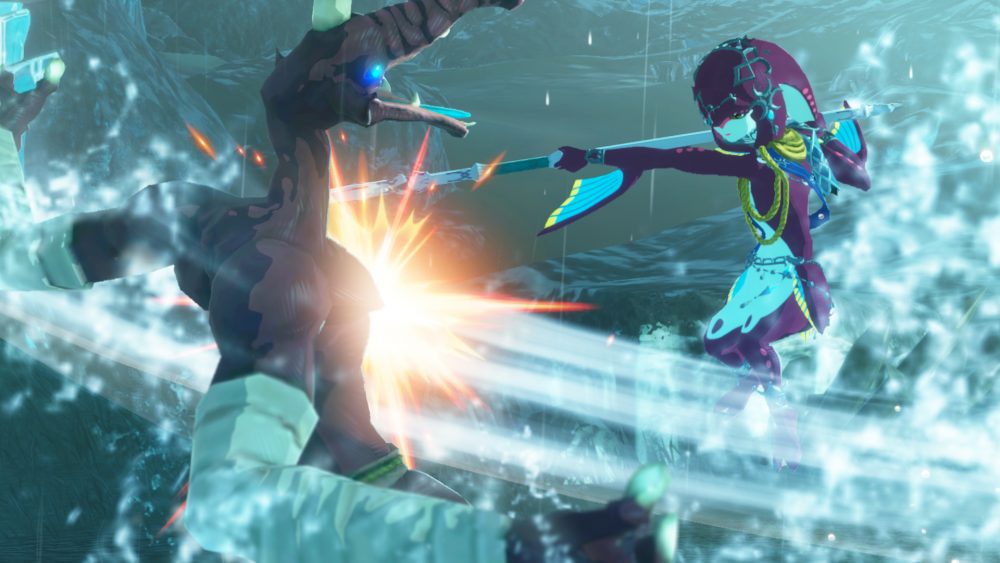 In this final installment of our deep dive into Famitsu‘s interview with Zelda series producer Eiji Aonuma and members of Age of Calamity‘s development team, we look at the bonds of trust forged between these very different game development teams. The interview, conducted by Nishikawa-kun, reveals the deep level of trust the Zelda team had in Koei Tecmo, and the strange challenges that trust gave Age of Calamity‘s development cycle.

We begin this portion with Nishikawa asking what elements Aonuma did and did not want to see included in the final game. Due to Koei Tecmo’s passion during the development of the first Hyrule Warriors, Aonuma states that he didn’t feel the need to hold their hand through the process, saying:

” [The] Hyrule Warriors team made a strong impression upon me, of their team’s deep understanding of the Zelda series, and their capacity to take ownership of the quality of the game they’re making. I didn’t have any particular need to say, ‘Please do it like this,’ and their capability surprised me once again with this game.”

He continues, musing about how the Zelda team pushed Koei Tecmo to be even more wild and creative with the combat and presentation of the end product:

“While the theming is that of Breath of the Wild, a combat-centric game like Hyrule Warriors may have things like ‘special techniques for tearing up hordes,’ and I wanted them to be able to go a little crazy with those things without having to be too conscientious of the frame work… That is the perspective I asked the Zelda team to take in their management of the project.”

That push to be creative was, according to director Ryōta Matsushita, one of the most challenging parts of development. Earlier on in the interview, he states that, while the freedom was “pleasant in one hand,” they weren’t expecting the Zelda team’s push for crazier, original ideas. He goes on to discuss a particular instance when their insistence on “going further” resulted in a unique, special attack:

“That’s right, there was actually a pretty big unified voice telling us, ‘We want you to take it further!’ [laughs]. The whole development carried on with the mission to ‘rise to the challenge we’d been given.’ For example, Link not only tosses out 4 remote bombs in succession, but the fourth one hits for extra! In that way, [the player] can destroy Bokoblin bases.”

Zelda team’s trust doesn’t mean they weren’t involved at all. During development, there were plenty of opportunities to collaborate and for the Zelda team to offer feedback. Matsushita shares how their feedback tweaked Mipha’s special attacks in particular. When viewing the animation footage, the Zelda team would offer useful critiques, ensuring the animation was flashy but still in line with her character.

Unsurprisingly, Aonuma and his team were deeply involved with Age of Calamity‘s story and characters. Matsushita goes on to explain how their story collaborations looked:

“After mixing in the core game elements, we were able to propose an outline from our side. We received close supervision from the first rough drafts of the storyline, and we kept in mind the point to balance ‘new experiences in the world of the past.’ Whenever we fleshed it out, were were supervised with each addition therein.”

Game producer Yōsuke Hayashi chimes in with his thoughts about story development:

“This may be a bit off-topic, but one of the things I had been thinking I most wanted to improve upon from the previous Hyrule Warriors was the story. I’ll refrain from going into detail, because I want it to be experienced in-game, but I believe this story will be more exciting for those who like the Legend of Zelda series.”

Trust, certainly, is a valuable thing. I for one am glad to hear that Koei Tecmo was pushed to do what they do best: create wild, over-the-top special moves and real-time, high-octane action.

How do you feel about this style of collaborative but hands-off development? Do you think the Zelda team should have been more involved with the development of combat and special moves? Or do too many cooks in the kitchen ruin a feast? Let us know in the comments!