Is It Time for Another Top-Down Zelda Game? 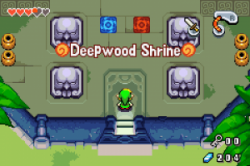 With a new console release imminent, this may seem like a strange quesstion to ask. After all, top-down Zelda games are associated with sprites, not revolutionary 3D graphics.

Nintendo franchises (Donkey Kong Country, Mario, Metroid) have gotten a shot at a 2D revival at some point in the past ten years. Others, like Kirby, never needed one. With the exception of Donkey Kong Country, these 2D games coexisted with 3D iterations in the series without issues. Having been introduced to the Zelda series with Ocarina of Time, I am partial to 3D Zelda games, at least in theory. There’s something about the scale of a well-made 3D world that’s awe-inspiring, and I have yet to play a 2D Zelda that quite captures the thrill of trotting across Ocarina of Time’s Hyrule Field or sailing The Great Sea. But I don’t see why well-designed top-down games can’t exist alongside these titles.

The classic games also have a charm all their own, and there are certain things that can be done from a top-down perspective that just don’t work well in a 3D space. While Skyward Sword has managed to emulate the speed of combat in classic games, it’s still governed by different principles when it comes to sneaking, attacking, and even parrying. Furthermore, while 3D games lend themselves well to complex puzzles, there was a creativity to the top-down overworlds, and a use of space, that allowed for simultaneous exploration and action. Gameplay didn’t stop or transition for one or the other; there was no Z-targeting, battle music, or anything of the sort for minor enemies, and the overworlds had the challenge of dungeons in many cases while still feeling different.

There is one disclaimer: I’m aware that much of the gameplay in Phantom Hourglass and Spirit Tracks is top-down, and in some ways they might feel like traditional Zelda games. But they have a totally different control scheme, which changes the feel of the action, have a very console-like overworld, and in general are more like Twilight Princess and Skyward Sword than, say, A Link to the Past and Link’s Awakening.

There’s room in the Nintendo catalog for another honest top-down game with traditional controls and a classic approach. There’s nothing preventing it from being innovative at same time–the last 2D Zelda, The Minish Cap, introduced too many good ideas to simply be called a rehash of its predecessors. The traditional approach last seen in that game, however, is sorely missed. The Legend of Zelda is one of Nintendo’s biggest franchises; why not introduce a revival?