Inspired By Zelda: Sneaking Through the Shadows with Aragami: Shadow Edition! 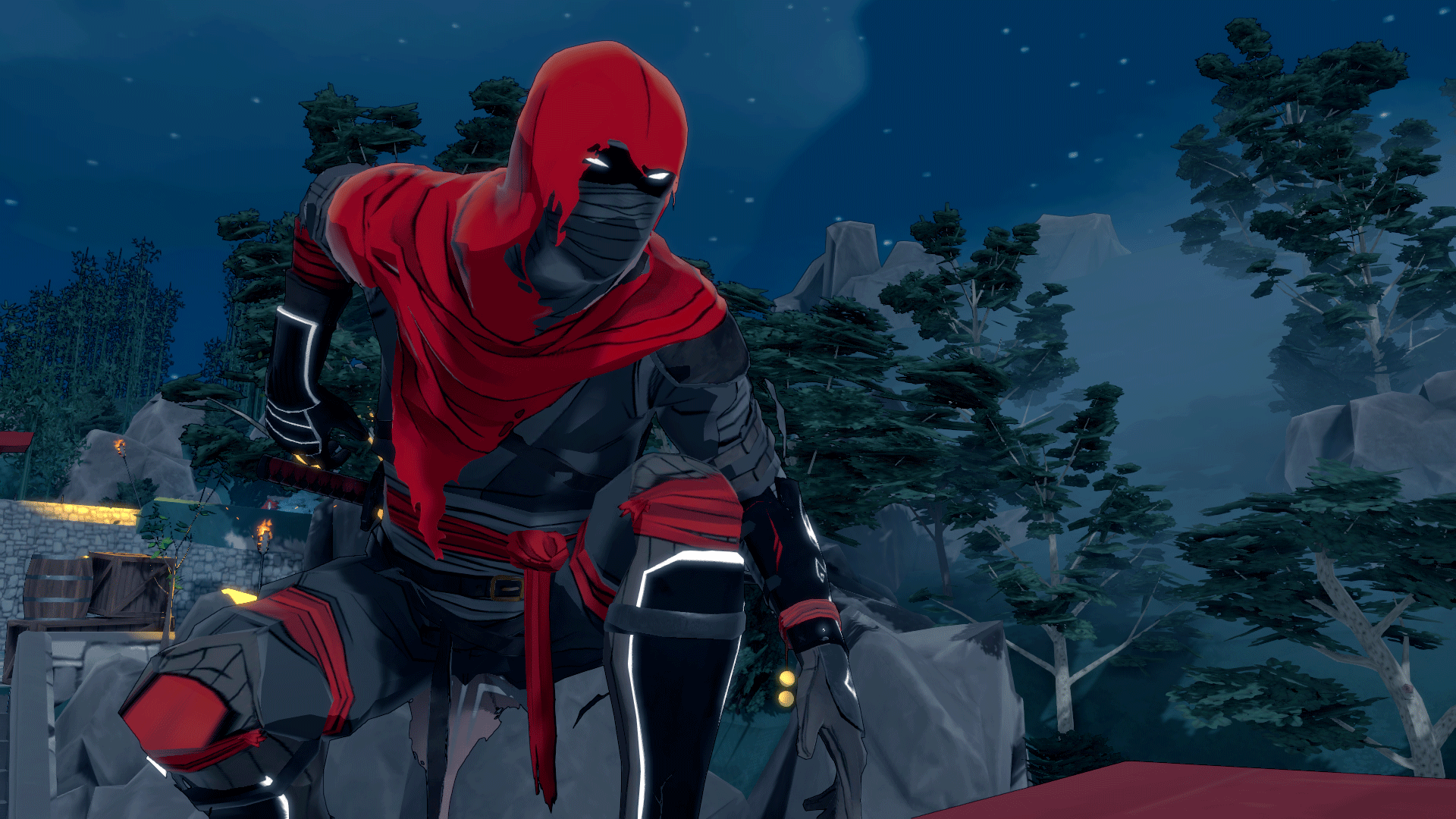 Welcome back to another (early!) edition of Inspired By Zelda! This week on the docket… Aragami: Shadow Edition for the Nintendo Switch, with the original Aragami title also available on PS4, Xbox One, and PC, developed and published by Lince Works.

Now, I should probably state right away that this isn’t as “Zelda-y” as I kind of thought it would be. It would probably be more apt to say that this game caught my eye because the art style looked like it was Inspired By Okami, which itself is an Inspired By Zelda game, so it kind of made the roster via a second degree. However, with the Okami art and the 3D action centering on combat and item usage, I figured what the heck, there are certain parts of Zelda games that incorporate stealth, so why not Aragami?

Well, I quickly found out that Aragami heavily and emphatically emphasizes stealth, making this more of a Inspired By Metal Gear Solid type of game – and even then, in Metal Gear, if the enemy spots you, you can fight them off and everything just shifts from sneaking to fighting.

Not so much in Aragami. If your enemies see you, you’re pretty much screwed. 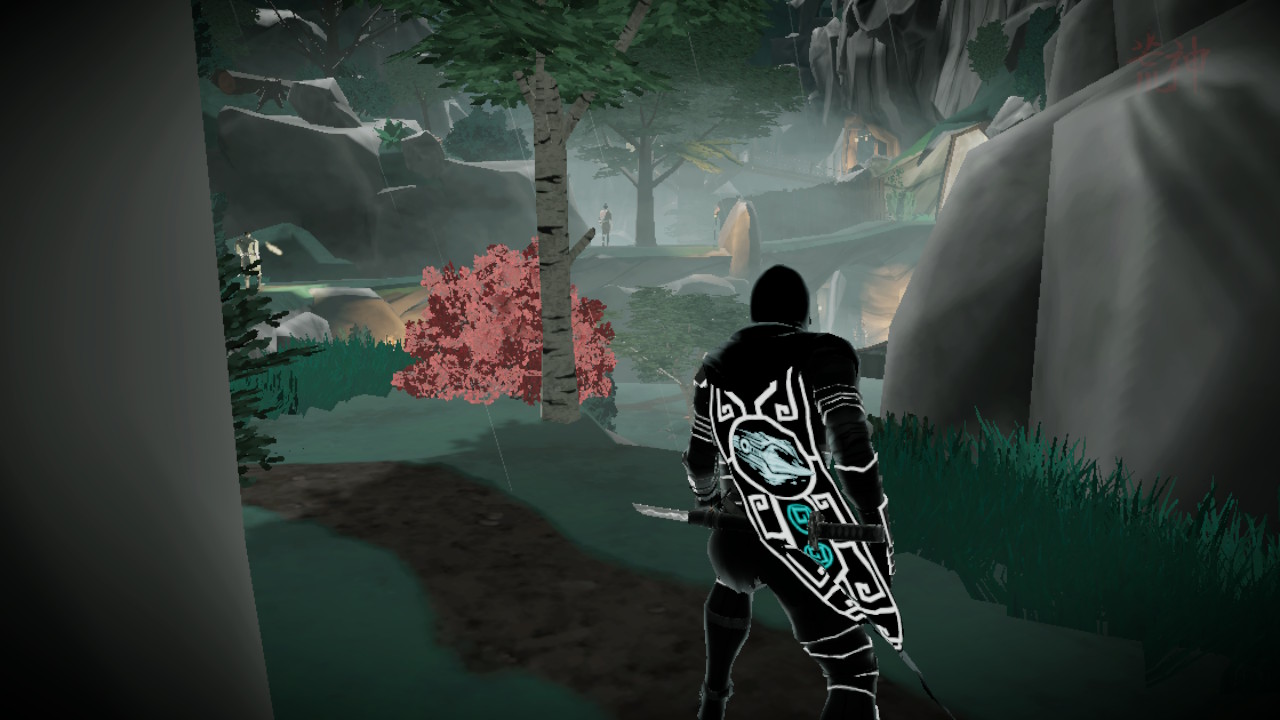 Let’s back up a bit though and start from the top. The first thing you’ll notice when you boot this game up is how cool it looks. The world is laid out in that same beautiful style Okami made famous, and it looks breathtaking. Feudal Japan covered in shadows never looked so good, and everything from the buildings to the water to the landscape looks awesome. Aragami himself looks like a total badass too. Kind of like what you might think Spawn would look like if he were a ninja. The character designs for the common enemy are nothing to write home about (infact the same two designs are recycled pretty much the entire game) but the main couple of characters in the game look awesome. Coupled with some pretty cool Japanese voice acting and a nice soundtrack, Aragami does an exceptional job setting up the mood.

The game’s story is pretty basic: you are Aragami, a spirit of vengeance summoned by the spirit of a girl named Yamiko to exact revenge on the Kaiho Army, a tribe wielding light instead of shadow, that are responsible for ransacking her home land, the death of her friends, and her real world imprisonment. Aragami has until sunrise to collect six talismans that will free Yamiko from her imprisonment and restore the mysterious Shadow Empress, ruler of the conquered shadow land, back to power. Along the way, Aragami starts to see some weird visions and you peel the layers back on the war of light versus shadow to see what really happened.

To be honest, I probably made that sound more interesting than it actually is. Story was definitely not Aragami’s strong suite, and the big plot twist of the game is so obvious even Mr. Magoo could see it coming. On the plus side, Yamiko definitely shares some certain qualities with Link’s shadowy companion Midna (seriously, they sound identical when they talk), so fans of her will probably like Yamiko. It’s not great storytelling, but then again it doesn’t really need to be. It’s all just a set up for what we’re really here for: shadowy ninja sneaking! (working on that tagline…) 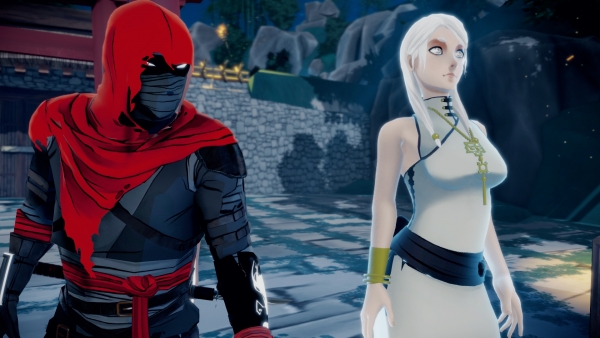 When it comes to playing Aragami as a game, I feel I need to make two statements up front that you readers can do with them what you will: First – I hated Aragami for the first couple missions; Second – this game improves exponentially the more you play it.

Going off the first statement, there’s a lot of things about Aragami that start off bad and take a while to improve, and frankly, a few things that start off bad and never improve the entire duration of the game. Aragami has an ability that allows him to teleport from shadow to shadow. A pretty cool technique, except aiming your cursor at the shadow you want to teleport to and actually having the teleport portal appear is such a pain that multiple times I figured I’d just take my chances and run; Sometimes it works, sometimes it doesn’t. There are a few spots in the game where you need to be teleporting fast, and this mechanic just lets you down with its finickiness.

At the same time, you need “shadow power” in order to use the warp and many other techniques, but you never really have an understanding of when it’s full or not. Most games would give you a gauge or a meter of some sort, but Aragami forgoes that -maybe in order to have a clean HUD to see more of the beautiful landscapes? I’m not sure why, but I found it to be sorely missing. You can kind of tell by how lit up Aragami’s cape is how much shadow power you have, but just like with warping, it’s super finicky, and when you think you have enough, you probably don’t. A definitive gauge would have really went a long way. The warping and the shadow power are just two things that never really improve that you need to deal with all game, unfortunately. This isn’t helped by the occasional hiccup in how the game runs in terms of framerate and loading times. 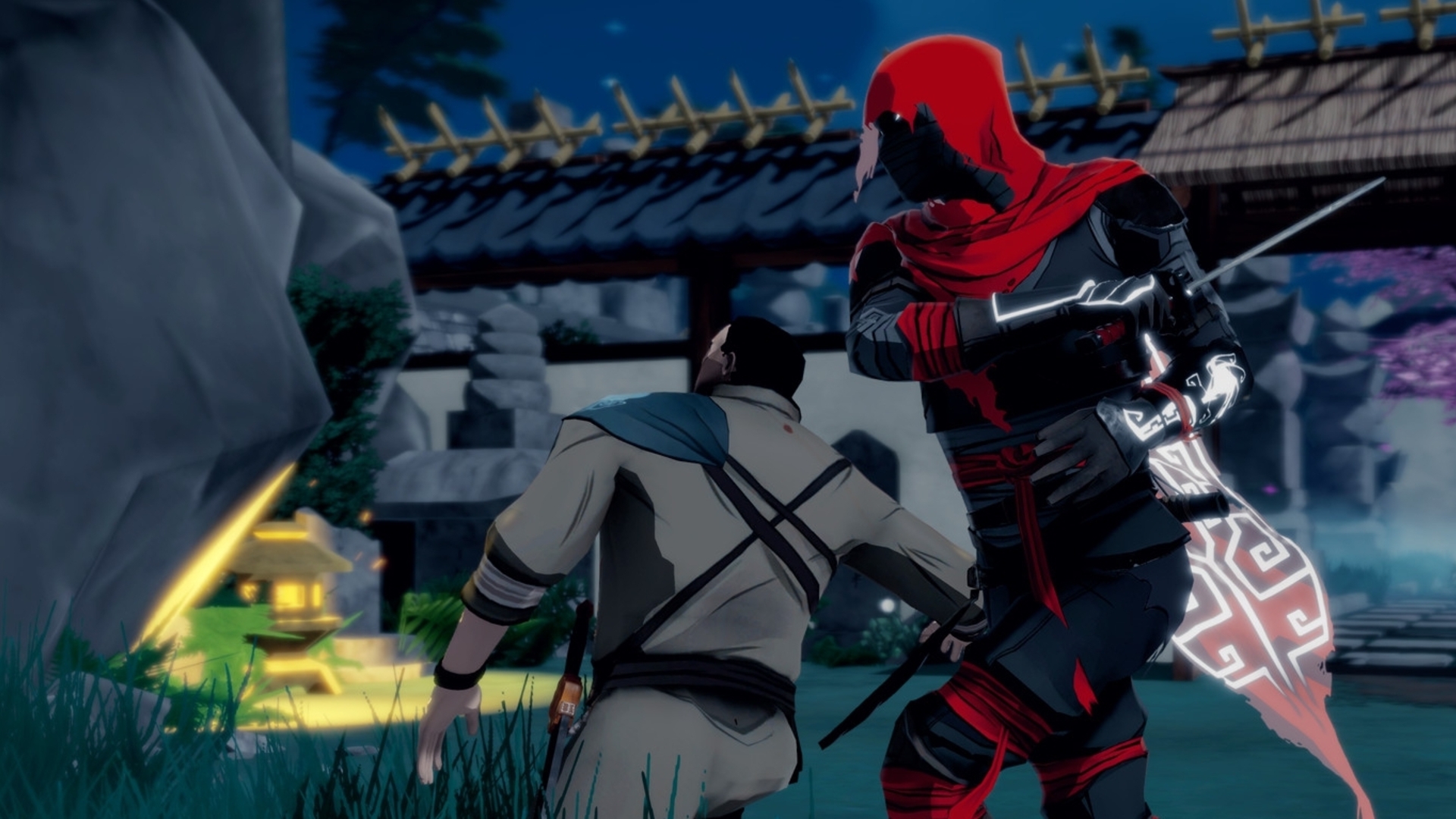 If you can look past all that though, things get much better on the sneaking side as you progress and unlock more abilities. To start off, you’re pretty much powerless and, like I alluded to earlier, if somebody sees you, you’re toast. All enemies wield light weapons, which means if the shadowy spirit we’re playing as gets hit, it’s a 1HKO. And make no mistake, you will die in the beginning – a lot. However, once you start finding some of the hidden scrolls and learning new skills that help you find ways to be sneaky and take out enemies, the game really heats up.

By about Chapter 5, I had an upgrade that showed me where to collect all of the hidden scrolls in each level, which then led me to having more upgrade points, which then let me then upgrade my skills to have things like the power of invisibility, ranged daggers to take out archers, shadow bombs to engulf guards, ways to hide enemy corpses, and other neat tricks. Once I started rolling with these new moves, I was actively cleaning up and taking out every enemy a level had to offer rather than sneaking by doing the bare minimum and escaping by the hairs of my chinny-chin-chin.

Speaking of taking out enemies, you have the option to either go ham on your foes or sneak by them completely undetected – the game rewards you for both all enemies killed in a level and no enemies killed in your end-of-mission grade. Being the cold blooded monster that I am, I decided to take the low road and take out all my opposition – although, I will say that one thing I was a little let down in was Aragami’s kill animations. Maybe I’m just a sadist, but it takes some hard work sometimes to sneak up on these guys for a stealth kill, so when you get a soft, clunky animation that looks like it’s not even connecting with the enemy, it left a feeling of dissatisfaction in my cold, heartless mouth. 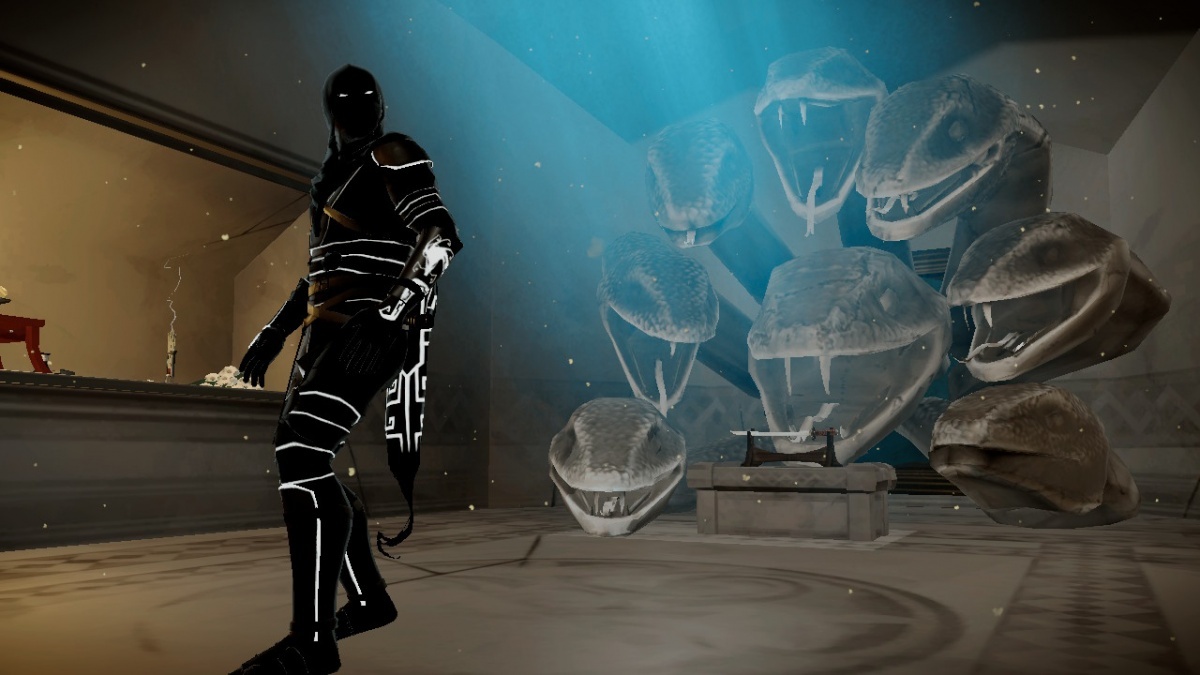 Ultimately, each level improves upon the last. Once I had found my sweet spot between playing it too safe and running-and-gunning enemies, I started to have a blast. There are three boss battles in the game that are a blast too – it’s a shame there weren’t a few more, actually – and I felt like I was finally starting to see the real Aragami, some 10 or so hours in.

As an added bonus, the Switch version comes complete with the Nightfall DLC, which introduces new playable characters, multiplayer, and waaay cooler kill animations. When I started playing Aragami, I just wanted to get through it as fast as I could, yet by the end, I was wanting more and found myself playing through Nightfall’s four new chapters.

Aragami is a game that took awhile for me to warm up to, but if you can wait it out, you’ll find a lot of fun to be had. There’s something undeniably satisfying about sneaking around and taking out enemies one after the other, and when you eventually unlock the more creative ways to accomplish that… that is when Aragami really shines. As a Zelda fan looking for a Zelda-like experience, this might not do it for you, but for fans of stealth, Japanese culture, and beautiful cell shaded graphics, there’s a lot to like here.

And that’s it for Inspired By Zelda for this month! Next time, we’ll venture from the shadows to the dead of midnight and leave our day jobs behind to see if we can find a great Zelda-like experience after hours! Until then!

Andy Spiteri is the Editor-In-Chief of Zelda Dungeon. He really wants a Zelda/Metal Gear mashup game with David Hayter voicing Link. Tell him what game you want to see next in the Inspired By Zelda series on Twitter.

Comments
Sorted Under: Games, Inspired By Zelda, Original Content, Slider, Zelda Like
Tagged With: No tags were found for this entry.