The unfortunate news that many people worried for has arrived: Hyrule Warriors has been confirmed to not support online co-op play. Nintendo’s Japanese website was thought to have revealed the inclusion of online co-op, but a recent tweet from the game’s official twitter has pointed out otherwise. Though, Nintendo’s website did reveal some actually true facts, like how much space on the Wii U the game itself takes up, and how many save slots there will be.

Check out the details, and the tweet, after the jump.

This was the original page that had some people thinking that online play was available: 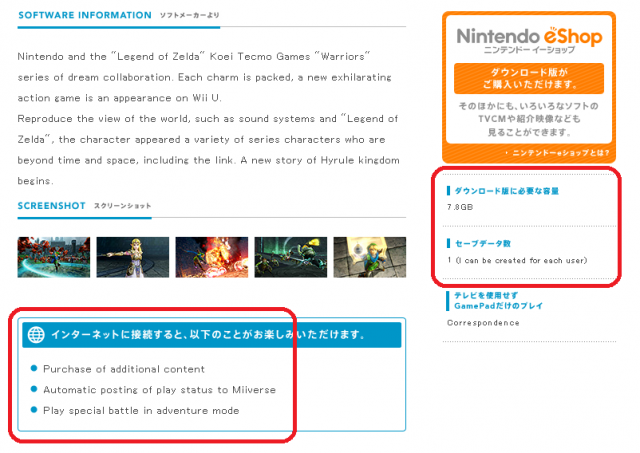 Since the “play special battle in adventure mode” label is under the online features box, we thought that people would be able to go online with others and have at least co-op battles in adventure mode. It could have also been expected that the upcoming Hyrule Warriors Direct would touch on this. Unfortunately, this is now confirmed to be untrue. This does not give us any idea about the inclusion of an online versus mode, though.

Though, the page does show that the final game will take up 7.8 GB on the Wii U, and there will be one available save slot.

This is the tweet that gave us the sad news, in a rough translation: 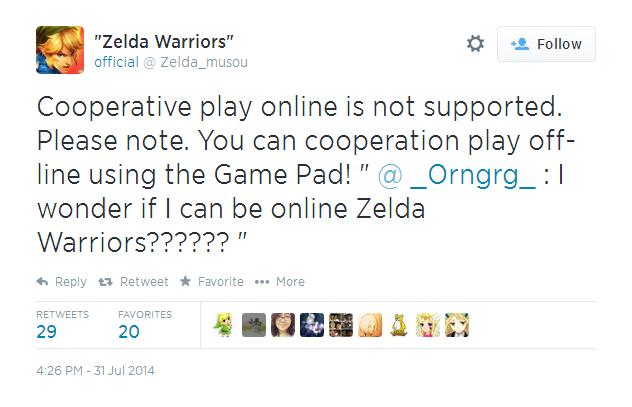 The tweet clearly states that local multiplayer through use of the gamepad will be the only viable method of co-op. This is truly sad news, as many of us were hoping to join up with people around the world, beating up bad guys en masse. Some even hoped for voice chat along with it. But alas, this dream of online co-op in a Zelda game will have to wait.

Are you excited for the game otherwise? Leave your thoughts in the comments!