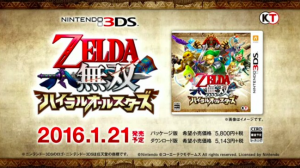 The Tokyo Game Show is going on right now in Japan and Koei Tecmo has announced that Hyrule Warriors Legends will be arriving in Japan on January 21. During a stage show at the event they also revealed that the game will release with two different collectors editions, a Premium and a Treasure Box, just like Hyrule Warriors for the Wii U. We also got to see a new trailer and some gameplay footage for the upcoming title!

Head past the break for the full details, gameplay, and new trailer!

The two different collector’s versions that will release in Japan are:

Check out the latest trailer and the first gameplay footage below!

I hope that Treasure Box comes to other countries as well because I must have it! What are your thoughts? Which one would you pick up? Is this game a must buy for you too? Share your thoughts in the comments below.