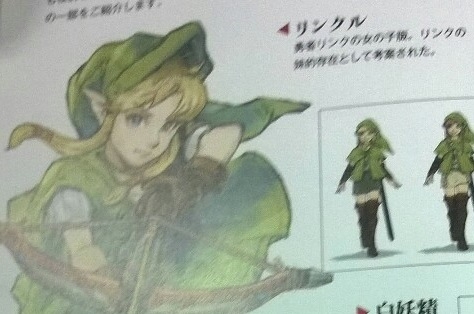 Hyrule Warriors is close to being every Zelda fan’s dreams come true as multiple worlds collide for one epic adventure, but those hoping for a female Link didn’t get their prayers answered. It’s unfortunate, because it almost happened. Layiko on tumblr posted some screenshots from the Hyrule Warriors artbook, and for the most part it looks like what you’d expect. Different weapon designs, scrapped concepts for character designs, and it’s all accompanied by final character design renders…well all except for one

Called “Rinkeru” in the artbook, it depicts a clearly female Link (possibly Link’s sister) with a crossbow. Some designs show that this version of Link would either be showing their midriff, cleavage, or both. Link’s cap returns, but his tunic was altered into a coat that she’d wear over her shirt and skirt. The design also messes with Link being right-handed again. It’s a fun and interesting design, and who knows, we might see it return in the future as DLC. It’s certainly an appealing design after all.