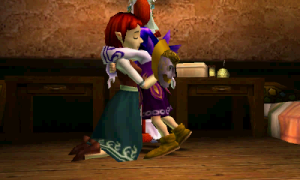 Zelda has a lot more deep-feels moments than one might expect getting into the series for the first time. Making the world you play in seems more and more important in many series as time goes on, but Zelda has always been one to touch a fan’s heart. YouTuber HMK, known partially for his discussions on his own, and already popular, Zelda theories, has made a list of his top 10 emotional moments in the Zelda series.

Check out the video after the jump! (Warning: some harsh language.)

I appreciate that it is not hard to think of a solid ten moments from nearly any game in the series. I recall back in the day, the emotional connection I had with the King of Hyrule, and the sadness I felt at seeing him fully willing to stay behind as Hyrule flooded once again. The moment, the music, THE FEELS – it all worked so well, just like so many of these moments.

What are your favorite emotional moments in Zelda? Was there ever a moment that truly made you want to cry? Drop a comment!