Posted on October 14 2015 by Brandon Schmitz 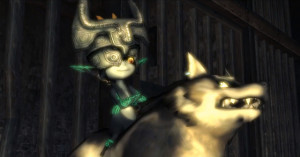 Since yesterday’s discovery of a Twilight Princess icon on the Wii U eShop, speculation regarding the prospect of an HD remake has run rampant. Several pundits within the Zelda fan community, including HMK and the folks at GameXplain, have chimed in with their thoughts. Take a listen, as well as read my senseless conjecture, after the jump!

Both videos explore the validity of the rumor, noting details that not only go against, but also support, the existence of an HD re-imagining. Although the icon in question features the original Twilight Princess cover art as opposed to new art — a la Wind Waker HD’s eShop icon — the image also lacks the Wii “banner” found in Virtual Console titles such as Super Mario Galaxy 2 and Metroid Prime Trilogy. Of course, the icon — assuming that it’s legitimate — could be a placeholder, but the kicker is that the file name is listed as “Twilight Princess HD.”

The bulk of GameXplain’s discussion is dedicated to ways in which a hypothetical Twilight Princess HD could improve upon the original title. The game’s introductory tutorial, especially, is among its most frequent criticisms. I totally get where its detractors are coming from, but I appreciate Link’s time spent in Ordon Village. Through that first hour or so, we get to see how mundane the Hylian’s life is before he’s thrust into this grand adventure.

That said, an HD remake would present Nintendo with several opportunities to make Twilight Princess even better. The 2006 original is my all-time favorite video game, but no title is perfect. As both videos argued, Twilight Princess’ visuals lack the inherent timelessness of Wind Waker. Although I think the game still looks fine, it certainly isn’t going to look any better with age. The textures, especially, could benefit from a major overhaul. The balancing act, of course, becomes updating the game with an aesthetic that’s more likely to stand the test of time while retaining the spirit of the original classic.

As far as the remake’s chances of even existing are concerned, I’m kind of dubious. Had Zelda Wii U released this year, I would’ve been more optimistic. I mean, Wind Waker HD released in time for its [North-American] ten-year anniversary, and Twilight Princess crosses the decade threshold next year. However, considering that we’ve only seen a home console Zelda title and a handheld game release during the same year — never two console entries — I’m not sure whether we’ll see it any time soon. I’d absolutely love to be proven wrong, though.

What are your thoughts? Do you agree with any of either HMK or GameXplain’s points? Are we more likely to see a virtual console re-release than a genuine HD remake? Let us know in the comments below!