Posted on September 11 2015 by Alexis Anderson 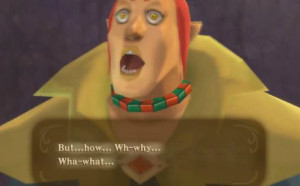 As the first in the timeline, Skyward Sword introduced a number of races and sacred figures that we see reappear throughout the series and explained the everlasting conflict surrounding the bearers of the Triforce. One race the game doesn’t explicitly reference, though, is the Gerudo. But Zelda Theorist, GameOver Jesse recently published a video showing evidence that Groose is actually the first Gerudo, and that Ganondorf is his direct descendant. Aside from visual clues and similar personality traits, GameOver Jesse examines geography and story elements that point to Groose’s being a full fledged Gerudo male.

To curse Groose in addition to Link and Zelda has some logic to it, but I don’t know if I buy that Groose is connected to Ganondorf. I’m surprised the red hair didn’t toss the same theory into my own mind, though. And I would honestly love it if Groose was the first Gerudo, their artificially haughty attitudes had to have come from somewhere. If you’d like to see more of GameOver Jesse’s Zelda Theory videos or any of his other Zelda related pieces, subscribe to his channel.

What do you think? Is Groose the reason the Gerudo males are cursed, or is he significant in another way? Do you have additional evidence to support or disprove this theory? Let us know in the comments!