Gossip Stone: What is the Appeal of Fishing in a Zelda Game?

Posted on February 18 2015 by Alexis Anderson 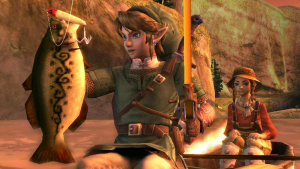 I remember playing Wario Ware on the Wii and loving the Animal Crossing fishing challenge because it required minimal strategy, was quick, and my catch offered instant gratification when displayed. Contrary to this fast paced mini-game, fishing in The Legend of Zelda actually requires some skill and a level of patience, so it isn’t a surprise that I never really took to fishing in Zelda. Fishing appears in five Zelda titles now with its implementation in Majora’s Mask 3D, which caused me to wonder, what’s so great about fishing in a Zelda game?

Fishing appears in Link’s Awakening, Ocarina of Time, Twilight Princess, Phantom Hourglass, and now Majora’s Mask 3D. I actually enjoyed fishing in Link’s Awakening because it was short and sweet. You pay ten rupees, sink your lure, hook or miss either a big fish or a small one, and get paid according to the size of your catch. Phantom Hourglass’ fishing was also quick; find a fish shadow, start fishing, make circles with the stylus at the lowest part of the screen and let go if the fish jumps, then give your fish to the Wayfarer when convenient. These being quick games that don’t take time away from the main quest, I can understand why people like them. But there isn’t any necessity in it. Fishing is a good time waster when the main quest gets too daunting, but unless you’re trying to get all of the heart pieces or ship parts there’s no need. 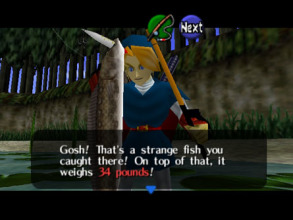 In Ocarina of Time and Twilight Princess, fishing gets much more involved. You can still receive a piece of heart or a golden scale or rupees, but it becomes a hastle. These games introduce far more species of fish for capture, make some very rare and elusive, and reward catches based on size in inches. On top of that variety, which can be seen as either interesting or tedious, the games make multiple lures available, make certain areas in ponds house better fish, and change the behavior of the fish based on time of day, season, and weather! For me this gets too crazy and complex for a side-game, if I really wanted to catch every type of fish I’d have to come up with a whole strategic plan and really spend a good amount of time preparing to do so. But other people find that kind of complexity compelling. Surely fishing adds another style of gaming to its Zelda title which will appeal to a wider range of players, as well as add substance and length to the game and make 100% completions rather difficult.

In the end, I’m biased in feeling that fishing in a Zelda game becomes a distraction when it’s too developed. Though I prefer quick mini-games, other gamers find the strategic planning that comes along with complex fishing to be very engaging. What’s your stance on fishing in Zelda games? Would you prefer the developers expand on a different mini game instead of fishing? Speak your mind in the comments!