Gossip Stone: The Importance of Couples in Zelda

The Legend of Zelda: nearly 30 years of action, adventure, puzzles, mysteries, romance…wait, romance? Yes even this iconic action/adventure series has had its fair share of romance between its silent-yet-smooth operator Link and whichever NPC his current incarnation is interacting with. But while the internet forever debates whether or not Link has the hots for Ilia or Midna, there are a few cannon couples in the franchise that always seem to bring a smile to our faces. These people help foster a feeling of hope in our play experience, letting us know while we are facing some of the worse evils the Goddesses could imagine, there is always that glimmer of light that life will carry on. Let’s take a look at some of my personal favorite couples in the series after the jump. SPOILER warnings if you haven’t played the respective games these characters appear in. 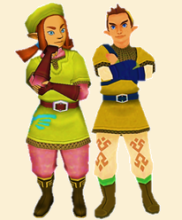 Skyward Sword is one of the first Zelda titles to heavily push the idea of a budding romance between Zelda and Link. The meat of the game is built around a desperate chase to catch up to your childhood friend and rescue her from the dangers on the Surface. But while traveling the world looking for your lost love, there is a certain pair of upperclassman who are in need of your assistance if there is any hope of them noticing each other. This mission starts out as a Gratitude Crystal quest for Cawlin, another classmate looking to get together with the aforementioned Karane. And while this quest actually has two outcomes you can take, neither of them work out very well for poor Cawlin. He gives you a love letter and asks you to present it to Karane, hoping that his affections will sway her into going out with him. Yet upon giving the letter to Karane you learn that she is overjoyed thinking the letter is from Pipit. Once she reads the letter and learns it is not from Pipit, but Cawlin, Karane is disappointed and she jokingly considers his proposal. Link, ever vigilant in the pursuit of love, immediately goes and tells Pipit of these events. There you can discover that Pipit too has feelings for Karane, but has yet to voice them to her. With all the seeds planted Link can then head back to Karane and watch the love triangle unfold. Cawlin has decided to personally confront Karane and asks her for a direct answer. But before she can speak Pipit interrupts and abruptly interjects his bid for a date. Without hesitation Karane accepts Pipit, and it seems true love has found its way in Skyloft. Poor Cawlin though, as he runs away sobbing at his rejection.

This pairing is personally my favorite in all of the Zelda series. Yeto and Yeta are a pair of married Yetis (see what they did there?) that reside in the ruins up on Snowpeak. Upon first meeting Yeto, the husband, you discover that while he may be a monster, he is actually nice and has only ventured out of the mountains in order to find his wife’s favorite fish. Yeta, the wife, has not been feeling well ever since her husband brought home a strange mirror. Link decides to check out what is ailing the wife and heads to the Snowpeak Ruins with Yeto on what is either the most fun or most tedious mode of transportation the Zelda series has offered up to this point. Upon arrival at the Ruins you can head inside to meet Yeta and find out that her husband has been gathering ingredients to make a soup to help her feel better. How sweet!

Yeta then informs you that she hasn’t been feeling herself ever since her husband brought her a mysterious mirror that she has stored in the master bedroom. Yeta then sends you all around the ruins in search of the bedroom key so that you can inspect this mirror. The first two missions turn out to be wild goose chases as you only find a pumpkin and some goat cheese. Talking to Yeto gives him the food you have collected, and helps him to improve the soup. A third run around the ruined mansion leads you to the bedroom key, and Yeta meets up with you as you head for the bedroom. Once inside you find that Yeta’s illness is much more severe than originally thought, and it takes Link’s special brand of ‘therapy’ to cure her. Once Yeta is feeling better, Yeto burst into the room to see what all the commotion is about. Upon seeing his beloved wife in such a weak state he immediately scoops her up in an embrace that made me blush and look away the first time I played through this part. Their love is even strong enough to produce an entire heart container for Link to add to his lifeforce. 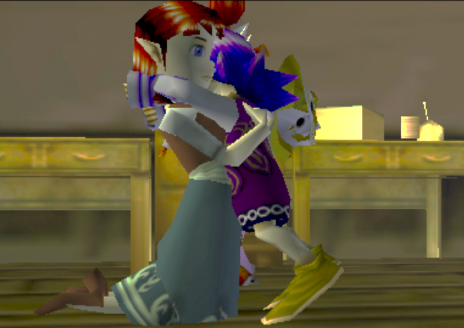 I’m pretty sure no list about couples in the Zelda series would be complete without these two. The quest to getting Anju and Kafei together is by far the longest, most in depth, and yields the most rewards of all the sidequests in Majora’s Mask. By going to the Mayor’s residence on day one and speaking with the woman there, you can discover that her adult son, Kafei, is missing. She then gives you a mask that looks just like Kafei and asks that you seek the man out. If you take the mask to the innkeeper Anju she tells you that Kafei is her fiancé and that she doesn’t know what has happened to him. The postman then delivers a letter to Anju from Kafei, where Kafei lets her know that he isn’t missing but he doesn’t want to be found. Anju insists from the postman to tell her where Kafei can be found, but the Postman keeps his lips sealed. Worried as to what has happened to him, she then asks Link to deliver a letter for her and to ascertain from the postman just where Kafei is. You follow her instructions and find Kafei, only to discover that the man you have been looking for has been turned into a child by Skull Kid. Yet this is not the reason for his continued absence. What is most troubling is that a thief has stolen a very special mask, one that Kafei intended on exchanging with Anju on the night of the Carnival of Time, similar to a wedding ring. Kafei is currently in hiding so that he can determine just who the thief is, and get back his lost mask. He then gives you a memento to give to Anju so that she knows to wait for him.

Finding the thief and getting the mask back is no small feat, and even requires Link’s help for Kafei to complete. He discovers the thief’s hideout all the way in Ikana Canyon and patiently waits for his chance. Sneaking past top-notch security, solving treacherous puzzles, and besting many enemies, Kafei reclaims the lost symbol of this love. With the Sun’s Mask in hand and only a few hours left until the moon falls on the town, Kafei runs full speed back to Clock Town. Upon arriving with only two hours to spare you can enter the inn with Kafei and witness that Anju has stayed in the town, despite the moon racing towards them and an invitation to take refuge at her friend Cremia’s ranch. Anju greets Kafei with the memory of their childhood vow to each other that one day they would exchange their masks, the Sun and the Moon, and be wed during the Carnival of Time. The two embrace as their ceremony is complete and the Couple’s Mask is created. While doom stands knocking at their door, the two pledge to “[greet] the morning together.”

Those are just three examples of the romance that can be witnessed in the Zelda series that I find to be the most rewarding. Personally I love what these sidequests do for the Zelda experience. They make us feel more of a connection to the people we are trying to save. Some of the people, like Pipit and Karane, are unaware of the danger that lurks about while others are all too familiar with their impending doom. And though a Zelda game doesn’t need this kind of interaction to be awesome, I believe it is one of the reason titles like Majora’s Mask stands out to us so much. What are some of your favorites? Is there one that made an impact on your Zelda experience? Or maybe there is an element in these that I didn’t touch on that made you smile (or cry?) Let us know in the comments below!