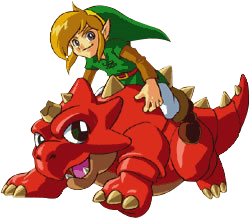 In Oracle of Ages and Oracle of Seasons, there was a strange item that -depending on where Link obtained it- would give him a different companion for the rest of his journey.  This item was the Strange Flute.  The item gives Link the ability to meet one of three animal companions, which help you throughout the game (you actually need them to complete it, anyways).  Each animal has a different ability than the other, so they all have their uses depending on which Link receives.  So I’d like to ask the question: Would you like to see animal companions return in future Zelda games?  Beyond this point I’ll be talking a little more about what animal companions are, and what they do.  So if you’d like to give it a look, hit the jump to check it out!

In Oracle of Ages and Oracle of Seasons, animal companions are required to progress through the game- but luckily, it’s your choice on which you’d like to partner up with, depending on where you have obtained the Strange Flute. The Strange Flute is -well, a strange item- that is obtained later in the game(s) from one of three places.

In Oracle of Ages, Link can either purchase the Strange Flute in the Lynna City shop, or win it in the Lynna Village Shooting Gallery by scoring 250 points (all while in the past). Or, if Link does not obtain it from either of these points, he’ll be given the Strange Flute by default during the main game. In Oracle of Seasons, Link can purchase it in the Horon Village shop, or by dancing in the Subrosian Dance Hall (you must have already obtained the boomerang, or else you’ll obtain it before any other prize- including the Strange Flute). If Link does neither of these, just like Oracle of Seasons, he’ll obtain the flute during the main game. 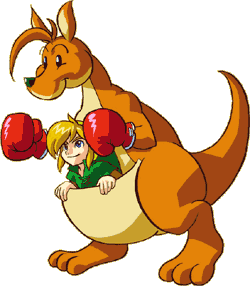 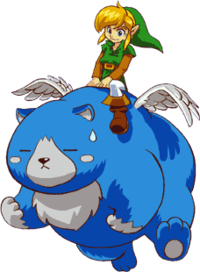 Each animal companion has a special ability that the others do not, such as Dimitri’s ability to swim, Ricky’s ability to jump to great heights (and box like a pro), and Moosh’s ability to fly and stomp on the ground with great force.

So, what do you think? For those who have and those who haven’t played through these games, from what you’ve heard, would you like to see animal companions make a comeback in future Zelda games? Or do you prefer they remain exclusive to the Oracle series? Do you have any other past mechanics you’d like to see in a future installment?  Sound off in the comments!