Gossip Stone: Is there a place for the Slingshot alongside the Bow?

Posted on September 24 2014 by Thomas Jacobs

One of the recurring items in the Zelda series is the Slingshot: a handheld device Link often obtains early in the games it is in. Unfortunately for every game it appears in, it’s typically obtained before the Bow; the Bow greatly outshines the Slingshot with improved range, damage and projectiles it could carry. Is there a place for the Slingshot alongside the bow, or is it an outdated piece of equipment that should be retired in favor of the bow? Read more after the break!

The slingshot has appeared six times in the series: in Ocarina of Time, Oracle of Seasons, Oracle of Ages, Four Swords Adventures, Twilight Princess and Skyward Sword. They are small and simple items, looking like what you expect a slingshot to: a Y-shaped piece of wood with a string between its limbs, and it can shoot seeds at enemies, pots, switches and more to attack them or toggle them. These shots are often lacking in damage compared to the sword, but they still have their use against the weakest of enemies and are used in puzzles before obtaining the Bow.

Like many elements in the series, Ocarina of Time had the premiere of the Slingshot. It was obtained in the very first dungeon and remained Link’s primary long-ranged weapon as a child, complementing the Boomerang with its shorter range but higher effectiveness against enemies. It carries 30 Deku Seeds and can be upgraded to 50, allowing for a decent amount of firepower. The downside however, is that for reasons unknown, Link is unable to use the Slingshot as an adult, and he is required to go find the Bow to regain the ability to attack at a distance. This means that the Slingshot and the Bow are essentially each other’s replacements when exploring the two different time periods, meaning neither are obsolete as you progress through the game. 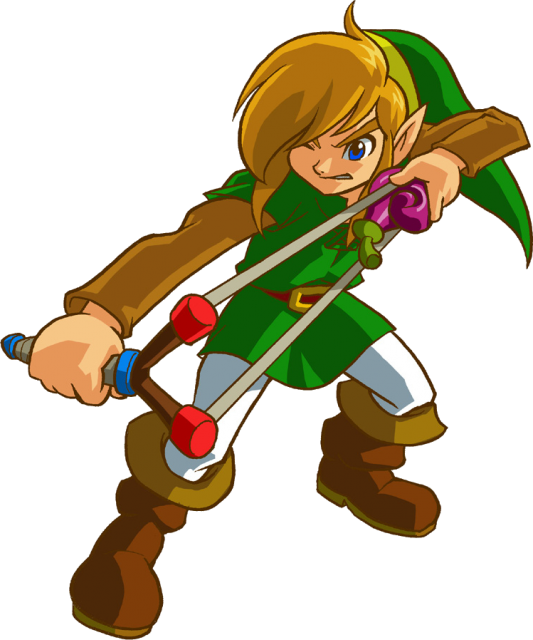 The Oracle games both featured Slingshot-like items, but they did something new with the Slingshot: instead of firing regular seeds it used Mystical Seeds. These can be used in the way Magic Powder works in A Link to the Past and Link’s Awakening by throwing it in front of Link, or alongside the Slingshot. Five kinds of these Seeds existed in the games, and the effects of some of them changed depending on with which item they were used. The Ember Seeds would either cause fire in front of Link or in the shape of a projectile that burned whatever it hit: this is useful to light torches or burn enemies. The Scent Seeds can lure enemies when used and damage them when shot. Pegasus Seeds make Link move quite a bit faster and improved his jumping distance, while it paralyzes some enemies for a nice amount of time when used at a distance. Gale Seeds can transport Link to any of the trees that these seeds grow from has visited, while using it on enemies it sends them flying off-screen in a one-hit kill, which is both rather amusing to watch and very effective against the games’ otherwise invulnerable Anti-Fairies. Finally, the Mystery Seeds can be used on the games’ Owl Statues to get hints, or on enemies to cause the effect of one of the other four seeds. They are also instrumental in one (mini-)boss fight per game.

The Slingshot (and its upgrade, the Hyper Slingshot) is a simple weapon that appeared in Oracle of Seasons that fired one projectile in the direction Link was facing, triggering the appropriate effect on impact as described above. The Hyper version of this weapon however shoots three projectiles at the same time instead of just one, greatly increasing the chance of Link hitting something. Oracle of Ages however features an item that is much like the Slingshot in its counterpart game, though here it bears the somewhat unfortunate name of Seed Shooter. It is more accurate than the Slingshot: by standing still Link can fire the weapon in eight different directions. In addition to this the shots bounce two times off walls and some objects until they collide with a torch or an enemy to deliver its effect, allowing for the design of puzzles where Link has to bounce the seeds at the right angle to hit his target. In both games the Seed Satchel can hold up to 20 of all five kinds of seeds (for a total of 100), and can be upgraded twice: once to hold 50 of each (netting a good 250) and a second time for 99 of each (495 seeds). 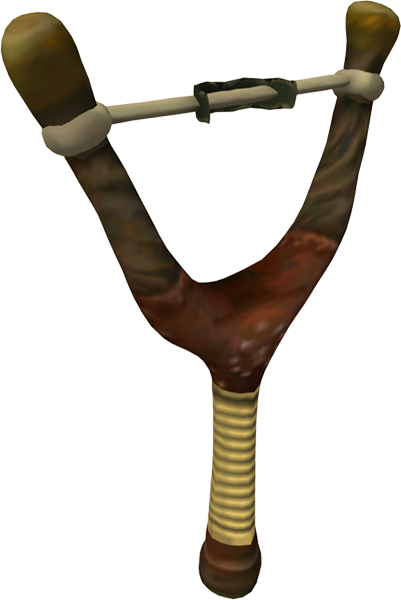 In Four Swords Adventures the Slingshot works much like it does in Oracle of Seasons: it fires a single shot in the direction Link is facing and after an upgrade from the Great Fairy it works much like the Hyper Slingshot. This game also featured the Bow, and here it’s obvious that the Bow is a lot more powerful than the Slingshot: it deals more damage, can charge its attacks to deal even more damage, and since no weapons in this series require ammunition to use them, this is not an issue either. What makes it even worse for the Slingshot is that the Links can carry only one secondary item and have to drop their first in order to pick up the second, meaning that giving up the Slingshot in favor of the Bow is a logical choice.

Twilight Princess once again has you obtain the Slingshot early in the game, this time before even the first dungeon. But here it is replaces quicker than anywhere else: in the first dungeon Link finds the Gale Boomerang which seeks out its target when locked on upon and the ability to draw smaller enemies towards Link for him to use his sword against. And in the very next dungeon Link finds the Bow: while it initially has fewer shots than the Slingshot (30 VS 50), this can be upgraded after beating the next dungeon. Additionally the Bow deals more damage than the Slingshot and has superior range, which more than offsets its more expensive to buy and difficult to find ammunition (common enemy drops VS guaranteed Pellets from Deku Babas and pumpkins). 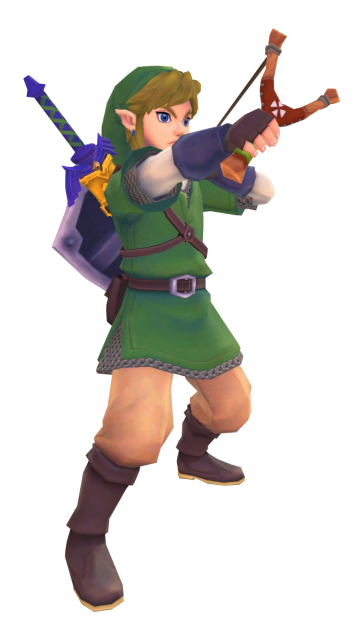 In Skyward Sword the Slingshot makes its return early in the game, given to Link by Bucha the Kikwi elder as a reward of finding a trio of missing Kikwi. It starts off holding a modest 20 Deku Seeds but can be upgraded to hold far more than that by ways of purchasing and buying several Seed Satchels. The downside to this is that these require slots in your Adventure Pouches and since many of the other items that require these slots are more useful, the player will not often find themselves using them. Like in Twilight Princess the Slingshot quickly gains competition as being Link’s most useful ranged weapon, this time in the form of the Beetle: while the Slingshot’s range is more limited its shots are a lot quicker than using the Beetle. Unlike its earlier appearances, the Slingshot is not a lethal weapon, it merely stuns all but the smallest enemies. It can still trigger switches and break pots: it just requires Link to finish the fight with his sword. It can also be upgraded into the Scattershot: a weapon that hits multiple targets in a small area in a single shot, just like the Hyper Slingshot and the upgraded Four Swords Adventures Slingshot.

This means that the Slingshot has had a number of characteristics over the course of the series: it is inferior in damage and range compared to the Bow, can fire a variety of seeds, bounce them off walls and can be upgrade to hit numerous targets at the same time. When it is used alongside the Bow it should be able to do something that the Bow cannot instead of functioning as a back-up weapon.

The special seeds are in the Oracle Games, where there was no Bow to rival it. But over the course of the series there have been different kinds of arrows that have special effects of their own: the Fire and Ice arrows for example, can be compared to the Ember and Pegasus Seeds when used offensively. The Fire and Ice arrows are closely associated with the Bow, though they only appear in three games. They do reinforce the idea of the Bow as an offensive weapon that can also solve puzzles instead of an item best used for solving puzzles. Fire, Ice, Light and Bomb arrows all have their uses when dealing with puzzles, and allowing the Slingshot to achieve the same in the same game would be something of a waste.

Instead, the Slingshot can become something of a puzzle item in the same way Oracle of Ages did it: by reflecting the projectile off of walls you can reach things you could otherwise not. While possible in a 2D game doing this in a 3D game would require some judicious and plentiful use of walls Link can see but not shoot through like ice, glass and perhaps grates. This can be used on enemies as well: perhaps some enemies will block all of Link’s attacks when they’re aimed directly at or locked onto, requiring either bouncing the shots on the ground in front of them or against the walls behind them in order to hit these foes. Using Ember Seeds and such could work but would come at the cost of its equivalent for the Bow: limiting the kinds of arrows Link can use will even this out.

To get the most out of the spread function on the Slingshot, there would have to be plenty of situations where Link is attacked by multiple enemies at the same time: doing this with Keese or small enemies would be best given their small sizes. Or this can be an upgrade to their damage: the more projectiles you hit a target with the more damage you deal, which would make the Slingshot an effective weapon against larger enemies.

What do you think should happen to the Slingshot? Keep it as a low-powered Bow to eventually be replaced? Make it the realm of trick shots or perhaps specialized projectiles? Perhaps allow it to shoot bombs at enemies? Keep it limited to the cel-shaded games in the hands of a younger Link? Or get rid of it altogether and stick to the bow? Leave your thoughts in the comments below!