Gossip Stone: How Many Side Quests are Too Many?

Posted on January 15 2015 by Catty Greentree 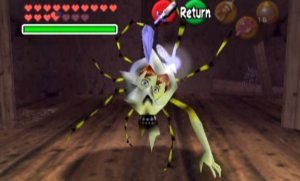 So it’s been established that Legend of Zelda Wii U is going to be side quest-heavy. Shigeru Miyamoto has been widely quoted as saying, “there may even be times where you forget what your goal is because you’re doing other things.” Having a more open world opens up the possibility of a more organic form of discovery and exploration but sacrifices some of the linear progression of earlier games. Click in to join the discussion.

It seems to me that there needs to be a balance between progressive game play and distracting side quests. For the purposes of full disclosure, I am going to admit that I don’t particularly care for side quests. I don’t want to bring eye drops to a Goron, or get a cat off a roof. If you are a person who likes the linear progression of traverse dungeon, get item, beat boss, then side quests can get tedious.

An appropriate balance is kept when side quests are optional and don’t interfere with the main game play. It isn’t so much a matter of the number of side quests, but rather how they are integrated into the game. While a side quest is by definition a mission where the player stops his or her forward motion and does something ‘on the side’ it shouldn’t feel like a loss of momentum.

Collection-type quests, be it Skulltulas or baby Maiamais, feel somewhat more organic; you have an additional thing to watch out for on your journey, and I think, it adds to the game play rather than takes away. It feels integrated into the world experience, in a way that mini-games and side quests don’t.

Personally I would rather trade the side quests for another dungeon or two. How do you feel about side quests? Are you excited to check out all the side quests in Zelda Wii U? Or not so much? Let us know in the comments below.