Gossip Stone: Does the Ocarina’s Power Rival the Triforce? 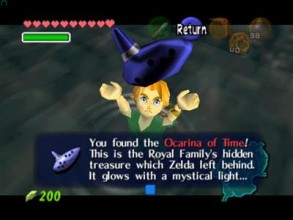 To celebrate our newest series, Tadtone Tuesdays, we look at one of the most powerful items in all of the Zelda canon. Link’s arsenal is made up of many powerful items that he uses throughout his quests, however, one item in particular holds a magical power that goes far beyond the abilities of just causing damage or solving puzzles. Between Ocarina of Time and Majora’s Mask, the Ocarina is possibly the most powerful item in all of Hyrule, second only to the Triforce itself. But depending on the way you look at it, the Ocarina could in fact be seen as the more powerful legendary tool, hit the jump to find out why!

While playing a Zelda game, it’s easy for the player to see all of Link’s equipment in the same way. While the mechanic may be different, each item simply aids the player in their quest to solve puzzles or access new areas. So, despite their obvious physical differences, the Megaton Hammer and the Cane of Somaria aren’t all that different. Similarly, items usually only have one or two uses. The Hookshot can be used in many areas but it’s always the same result. The Hookshot gets you from point A to point B or it freezes an enemy. Yet, the Ocarina is a whole different story as it produces vastly different results in a wide variety of situations. With the Ocarina, the player learns over a dozen songs in its first game alone, all of which serve different functions. This makes the Ocarina seem to be a much more useful item, though it is still just a means to an end; it still simply helps the player solve puzzles and access new areas.

However, if we look at these item’s from Link’s perspective, within the confines of the game’s world, these items are far from being the same. To Link, a magical cane that creates blocks out of thin air is far more impressive than a heavy metal hammer. How much more impressive then, would it be to have a single musical instrument that can identify you with the Royal Family, summon storms, command the Sun, instantly teleport you around the world, and even manipulate the very fabric of space and time. Needless to say, the Ocarina is a vastly different relic with incredible powers. Link must feel pretty strong toting around such a massive array of items, weapons, and equipment but none of Link’s other items hold a Red Candle to the immense, super-Hylian abilities of the Ocarina of Time.

Below are just a few examples of the incredible powers the Ocarina bestows upon Link that we, as players, sometimes take for granted.

Saria’s Song – A happy song that allows Link to telepathically communicate with his childhood friend Saria to receive advice on what should be done next. It also can be used to put certain people of Hyrule into better, more helpful, moods.

Scarecrow’s Song – This is the only song that Link himself can come up with. Once created and played at certain locations, it will summon one of the Scarecrows. This omni-hearing, sentient Scarecrow comes to aid Link in record time with no true explanation of how exactly he does what he does.

The various teleporting songs – These song’s transform Link into light, or bestow him with wings, that magically teleport him to designated locations.

Song of Storms – Gives Link the ability to control the weather, creating a short but thunderous rain storm. This can be used to gain entrance to the Kakriko well, water plants, summon special fairies, calm a wandering spirit, and even dispel a Bubble’s curse.

Sun’s Song – Changing it from night to day seems simple from a player’s perspective. However, being able to literally move the sun on command is something that is rarely seen in any medium.

Song of Healing – This song takes immense sorrows and transforms these negative energies into a useful mask for Link, thus healing the one listening to it. (As far as psychology and the basic human experience is concerned, this is one of the more profound abilities of the Ocarina)

Oath to Order – This song has one of the most theatrical displays of power. Not only does it summon giant deities from the four corners of Termina, but it brings their power with them. With their pure physical size and strength they are able to keep the moon from crashing into the earth. This essentially means Link was given a song that resonated such a deep commitment of friendship that the giants would risk everything to help Link save the entire world.

Song of Time – Princess Zelda makes a reference that this song is somehow linked to the very Goddess of Time herself. When played, normally or with it’s variations, the Goddess of Time comes to Link’s aid in order to manipulate the very flow of time. Having direct access to a time-bending deity is one of the more impressive abilities bestowed upon Link via the Ocarina. This song also magically moves certain stones as well as opens the Door of Time. Essentially, this song is the key that the original Goddess of Hyrule bestowed upon the Royal family to gain access to the Master Sword and the golden Triforce itself.

So when looked at from the perpsective of Link, the Ocarina becomes a much more impressive item. I know that too often, I take game mechanics for granted and sometimes fail to see just how impressive certain items or plot devices can be when viewed from the hero’s perspective. The emotional connections, super natural abilities, and sheer variety of uses make the Ocarina seem like one of the most powerful relics in the entirety of Hyrule.

What other Ocarina songs seem impressive from within the worlds of Zelda? Are there other songs in the series that you feel have incredible powers beyond that of Link’s normal items?