Posted on February 26 2016 by Alexis Anderson 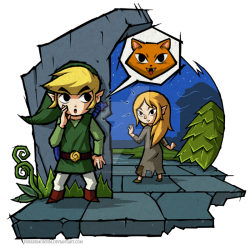 The Hero of Time is a rather silent savior, he doesn’t speak casually but we do see him gesture and make mouth movements as if he is speaking to someone. Though we are not privy to these conversations and we rarely hear our hero’s voice, it is clear that at times he is capable of speech. Selective Mutism is a condition that often occurs due to genetically predisposed Anxiety Disorder or Sensory Processing Disorder which results in children not being able to speak comfortably in a majority of situations. Only with certain people or in familiar settings will children with this affliction speak, and these children are usually socially impaired otherwise.

Many Links seem to me to show the symptoms of Selective Mutism, after the jump we’ll see which Links we can diagnose and how this illness has affected their heroics.

The Link I associate most with this condition is the Link from Ocarina of Time, mainly because of his lack 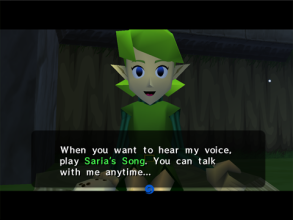 of friends in Kokiri Village. I initially pictured this Link as the best candidate because I thought traumatic experiences caused Selective Mutism and Link as a very young boy witnessed a war and likely his mother’s death, but studies have shown no evidence that the cause of Selective Mutism is related to abuse, neglect, or trauma (and I don’t know that Link would’ve been old enough to remember being smuggled out of burning Hyrule anyway). I digress, back to having no friends! The socially inept aspect of Selective Mutism applies to this Link because he was kind of only friends with Saria, who is the sweetest and most patient girl. She even gives him an instrument to remember her by, so it’s possible that they used music as a means of bonding or communication. If this is the case it’s no wonder Link took such a liking to the Ocarina of Time and grew accustomed to using it so quickly–it would’ve felt natural for him.

The only thing with Selective Mutism that makes it seem not fitting for Link (any Link) is that it typically comes with crippling anxiety. The level of anxiety is different for every child afflicted, which is what this theory clings to (and the fact that there’s a subset of children who exhibit no social impairment, though it’s unclear what causes their mutism in these cases). Some children freeze in fear when in a social situation that puts an expectation on them, which isn’t like Link. Link often remains slightly outside of social situations though, more like an onlooker and isn’t often expected to speak. But in instances requiring courage he is fearless. Selective Mutism only dictates that the anxiety applies to social events, so Link’s unwavering courage in action-related events may not be affected by this illness. Perhaps he’s even further equipped to take action, because doing so is his greatest asset for showing his worth without speech, maybe he prided himself on being useful to others that way. 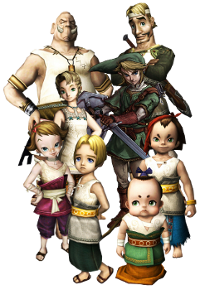 The Link from Twilight Princess is also a candidate for Selective Mutism, though he seems to have many friends in Ordon Village. Perhaps his condition was less serious than Ocarina of Time Link’s, but Ordon would’ve been a comfortable setting for him anyway where he’d be able to speak to more people. He again had sweet, sensitive Ilia to coax him through social situations too. Maybe when he was younger she was a lifeline for him and she stood like sort of a therapist that helped him improve his conformability over time. If Link was able to overcome his affliction to this extent, it would be another good reason for shy and self-deprecating Colin to look up to him as an inspiring courageous figure. I think Link’s age in Twilight Princess is what allows him to be better acclimated to new situations, he gets hit by some curveballs in this game and initially reacts in a shocked manor but he does seem to overcome much of his fear, even socially. Likely thanks to Midna’s company, as she warmed up to him he warmed up to the world outside of Ordon– and I feel he was always thinking of Ilia which kept him motivated.

Now I mentioned we only seldom hear our Link’s speaking voice, and I know it came as a crazy surprise to hear The Wind Waker’s Link yell, “Come on!” This Link I feel is the least socially impaired of the bunch, but the anxiety related to Selective Mutism is often hereditary. If we’re looking at Link’s family history, his Grandmother is not the most mentally sound person. After Link heads off to save Aryll, she totally shuts down– she becomes depressed, rarely leaves the house, sleeps the majority of the time, barely eats, and worries about her grandchildren constantly. Basic symptoms of Separation Anxiety. So this Link I believe was genetically predisposed to anxiety, but got it in the smallest degree and expresses it through irregular sleeping patterns and not speaking. He seems socially capable in every situation, but again the only times we hear him speak are to Medli and Makar who he is definitely more connected to than some other characters in the game so this stills shows the need for a degree of comfortability with whomever he speaks to. 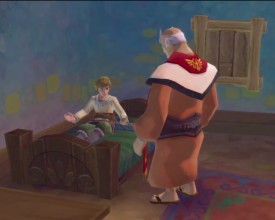 camera-shot-no-sound-speaking thing with Zelda’s father, Gaepora. It’s clear that Link would be very close with him as he and Zelda have been inseparable friends since childhood, so it’s no surprise Link can speak to him. This Link though, at least in my opinion, does seem socially impaired. He is constantly underestimated in this game: we meet his bully Groose and his cronies who abused Link in Skyloft, then we have Impa destroy his confidence on the Surface, even Faron doesn’t believe that he could possibly be the Goddess’ hero for quite some time. This leads me to suspect Link doesn’t gleam confidence or charisma, he very well may have been showing symptoms of anxiety in front of these people and they judged him on that. However, this Link talks significantly more than most others (the player gets dialogue options frequently), so rather than having Selective Mutism this Link may just have a mild level of Anxiety– or maybe he’s just shy.

I am in no way an expert on the subject of Selective Mutism (or anxiety), so there may be a lot about this illness that I am not even considering in this article (do feel free to debunk or bolster my arguments in the comments). However, I do like the idea of Link’s silence having an actual physical cause, it would also be great to have such a reputable video game hero bear a mental illness. Whether it be Anxiety Disorder or Selective Mutism, this kind of representation would go to show that the symptoms of these disabilities can be overcome, or even used to make someone stronger and shape their skills in areas other than sociability.

So what do you think, does Link have Selective Mutism? If he canonically did, do you think it would bother you or would you be happy about it? When considering all Zelda characters, are there any you think are afflicted with other mental illness or physical disabilities? Share your thoughts in the comments!