In recent months, Zelda fans were happy to see Link appear in Mario Kart 8 as a DLC add-on, but it got me thinking about how many fans in the past have said that seeing Zelda spin-offs involving activities other than adventuring, like what the Mario series has done, would be great. Could there be a Zelda game in the future that involves something totally different from adventuring? 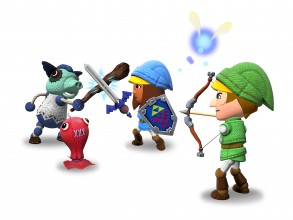 What I actually think of in this sense is a game that would either end up like Nintendo Land or Mario Party. For Nintendo Land‘s style, a game could feature you playing as one of various characters in the Zelda series in some sort of festival or something, able to go to any of various minigames related to several events throughout the series. They would be seen as historical events to the people in the game, so the “festival” being celebrated could be related to Hyrule’s history. Horseback riding, sword-fighting, shooting, puzzle-solving, and more could be used, and you could play them all for high scores and a great time with friends.

As for a party-style game, there could be the usual board game-type of gameplay, and playing minigames every now and then, with some unique spin on it, like Super Smash Bros. for Wii U did in Smash Tour. Again, the minigames are plentiful in Zelda, so it would not be hard to think of things to do every turn.

Unfortunately, Super Mario games seem to have already made the most of thing like sports and games played with friends, as there are whole games dedicated to each instance, but maybe Zelda, with its medieval style, could bring up something new and cool!

What do you guys think? What could a Zelda game, spin-off or otherwise, involve other than some grand adventure as its center-point? Leave a comment below!