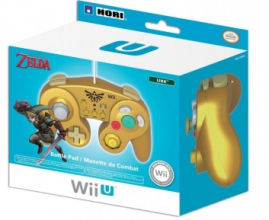 HORI, who recently announced to releasing a Gold Zelda MK8 wheel, is also set to release a golden Game Cube inspired fight pad for the Wii U. It is similar to the already released green Battle Pad, but has several new features. Hit the jump for release date and more information on this great addition to the Wii U hardware lineup. 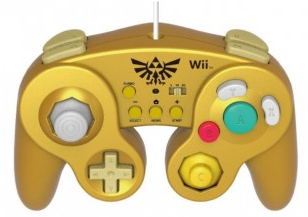 The fight pad is officially licensed and features three turbo buttons, short stroke L and R triggers, and a large D-pad. It will function as a Wii Classic controller and can be used in titles such as Smash Bros Wii U and Super Mario 3D world.

Amazon is listing a September 21, 2015 NA release date, while EU’s release date is in August. You can preorder your own Gold Zelda Battle Pad here. Be sure to reserve yours soon before they sell out!