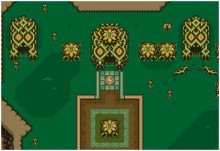 Pop-Fiction is a series of videos from GameTrailers which explore some of gaming’s biggest myths. They have already investigated several aspects of the Zelda series, such as the mysterious Chris Houlihan room from A Link to the Past, and the supposed removal of the original version of the Fire Temple music from early editions of Ocarina of Time. Pop-Fiction have returned to Hyrule once again to explore another mystery, this time a slightly lesser-known one concerning an enigmatic hidden “ghost” enemy in the Swamp of Evil from A Link to the Past. Hit the jump to see the video!

I’ve always been a fan on GT’s Pop-Fiction videos, purely for their fascinating and comprehensive explorations into the murkier depths of gaming. Although this was the first time I had heard of the “Ghost of Misery Mire” myth, it was still a fascinating insight into how a simple error in enemy coding can lead to often unexpected and initially unexplainable results. It is certainly an interesting quirk in the game which, like the Chris Houlihan room in the game, can sometimes be fun to experiment with and deviate from normal gameplay.

You can see all of GT’s Pop-Fiction videos on their page here.

But what do you think? Did you find the exploration into the “Ghost” an enjoyable watch? Was this the first time of you hearing about the mystery, or had you encountered it in the game before? Tell us in the comments below.