Every gamer should experience Ōkami. That’s a given. In the six years since its release, this game has seen unprecedented critical acclaim. It’s often labeled a “sleeper,” but I won’t go that route; while it hasn’t pushed the kind of sales it unquestionably should have, a good number of gamers have seen this game in action and know why it’s so revered. With the impending release of the HD version of Okami on the PlayStation Network, it will soon be available for three consoles. There’s no excuse not to pick it up.

But what makes Ōkami good? Well, the most obvious thing is its Zelda influence. For Zelda gamers, Ōkami is a must-play. At times, it feels more like a proper Zelda game than some of the more recent titles in the series itself. It loosely follows the dungeon-overworld-sidequest pattern familiar to people who have played them, and it recycles several ideas from the fabled series. On the other hand, it’s also a wholly original experience. A still screenshot from even the PlayStation 2 version doesn’t look like it’s from a videogame; it looks like art, with all the charm, slight imperfections, and bold design choices you’re likely to find on a canvas. The game is aggressively Japanese in all the best ways, so the separate elements are glued together by a unified, unmistakable style that, while unprecedented in the world of videogames, has a firm of grounding in our own.

It’s this unification, this sense of realism in the game’s unrealistic style, that makes it such an unforgettable experience. 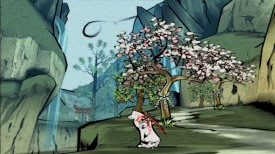 You have to dig a little, though. On the surface, it’s not different from many modern games, and arguably “suffers” from what many older Zelda fans consider problems with new Zelda titles. Like Twilight Princess and Skyward Sword, the quest is entirely linear and plot-driven; there is little to no freedom for the player to navigate the world, and it is difficult if not impossible to discover new areas before you are supposed to. On top of that, the plot is domineering. The game starts with a nearly half-hour cutscene, and starts slow, with a lengthy tutorial section before you get to the meat of the experience. The overworld itself is not seamless and wide open, but restricted to corridor-like sections that roughly outline the different chapters of the story.

All of these things could be negative. They certainly don’t make the game a full adventure experience in a classic sense; player choices have little, if any, impact on the world and any freedom is superficial at best. Oddly enough, however, these weaknesses turn to strengths very quickly when the game’s fundamental mechanics and design are considered. True, you are restricted to individual areas, but each of those areas has such a unique identity, and is so packed with secrets of its own, that there’s never a shortage of things to do. The story is prominently featured and impossible to ignore, but with unique, entertaining characters and a good balance of humor, drama, and action, why would you want to ignore it? It is as integral to the game’s atmosphere as its art style, as key to the game’s identity as its gameplay. Finally, the linear gameplay almost seems necessary; Ōkami is a game driven by a core artistic vision, and an artistic vision is hard to convey, even in an interactive medium, without a significant amount of developer control.

What we’re left with is a linear, plot-driven masterpiece that is a precise example of how a 3D Zelda game should play. Almost everything good about 3D Zeldas — particularly The Wind Waker, with its dichotomy of a linear plot but a wide open world — is present and accounted for in Ōkami. What the developers managed to do was take that Zelda template and wrap around it one of the most compelling worlds and styles that have graced console adventure games in their short but complex history.

The story is memorable and unique, grounded in Shinto but with plenty of its own traits. It is at times focused, at times complex, but most importantly, the characters always take center stage. You’re likely to run into numerous sidequests, and many of them are silly while others are moving. Advancing through the main story means solving people’s problems, but you’re rarely left on your own by the end of it all; characters from earlier in the game will crop up to help you later on. It all helps give the world a very real flavor, even while the plot points are over-the-top. It feels less like you’re running down a simple checklist and more like you’re simply experiencing different things in the game’s world. 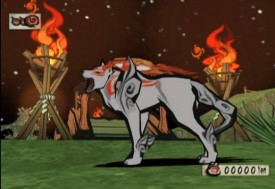 Amaterasu is an endearing protagonist. While she is a goddess, her characterization as a wolf is frighteningly accurate. She’ll howl, fight, dig, and explore like a wolf, and she exudes a natural curiosity that’s intoxicating, a good thing to have in an adventure game. Her companion, Issun, serves as her voice. Like some of the more beloved Zelda companions, he plays an important role in the story, but never gets in the way. He sees more development as a character than Amaterasu — at the beginning of her quest, he’s brash and impatient, and perhaps a bit obnoxious, but by the end his motivations and overall attitude have changed. Like most of the good things in this game, this character development feels like it’s earned, not forced.

Aesthetic plays an important role, and the soundtrack is key to this game’s success. It sounds ancient, epic, and completely in line with whatever happens to be going on in the story or in a particular environment. It doesn’t seamlessly mesh with the gameplay the way the graphics do, but Ōkami is a clear case for games as a work of art, and the soundtrack certainly contributes to that.

The most immediately evident thing about this game is the visual style. It is impossible to avoid. The HD remake is particularly rich, but the original PS2 version and slightly brighter Wii version, are visually flawless as well. The visuals are obviously cast in the Sumi-e style, which should be familiar to anyone who’s paid attention to asian art. There is a minimalist approach to most characters, with strong brush strokes outlining sparse features. Most of the world operates on the same principle — you’re unlikely to find detailed textures, but all surfaces seem to bleed ink and color. The end result is a watercolor painting come to life.

In this way, the game’s aesthetic is inseparable from its gameplay; gameplay is always about challenge and reward, and while Ōkami isn’t particularly difficult (in fact, Zelda veterans should find much of it to be a walk in the park), the reward is always significant, and it keeps you playing. The gameplay is based around the mechanic of restoration. When you start the game, the world, Nippon, is broken and even slightly dead. The real joy comes from the effects you have on the world through the goddess Amaterasu; you restore each area’s life and color, bringing forth the area in its proper form. Ōkami makes you feel unusually powerful, even if you don’t have many choices about how to use your power. The visual spectacle that accompanies your accomplishments is significant. This means the reward for even spreading ink across dead grass is considerable.

The short-term rewards, however, pale in comparison to the long-term rewards. Like Link, Amaterasu sports an ever-growing arsenal of useful techniques. Unlike Link, these techniques aren’t contained in items, but in the (generally) easy-to-use brush mechanic. You can use bombs, slow down time, cut down trees, make trees blossom, and more, but it always comes at the cost of ink, and the inkpot is finite. Ink is this game’s version of magic, and keeping it stocked is the key to success. Running out of it makes you vulnerable to attack and unable to progress until it refills. Fortunately, this doesn’t become much of a problem except in the heat of battle. 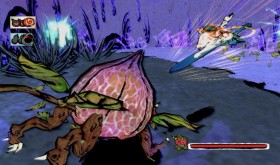 And the battles are engaging, make no mistake. While most of your time will be spent progressing through barriers with your abilities, the game has plenty of combat — among other gameplay sections — to keep you occupied. Battles are totally different from anything you’ll find in a Zelda game, and they’re hit or miss. Most of what you’ll experience boils down to button mashing and puzzle solving; each enemy has a specific weakness and learning how to target it is important in taking the enemies down. Like exploration, techniques are a must; you’re likely to get the most out of battle by utilizing your ever-growing arsenal of brush techniques. This helps keep things fresh as you regularly encounter new enemies in the overworld and dungeons. Battles can get heated, with multiple enemies attacking at once, but ultimately, the point in them is to harvest items, power up your character with experience, and just advance in general. In this way, battles never feel detached from most of the game’s mechanics.

Ultimately, Ōkami is one of the most well-rounded, interesting experiences you’re likely to have with a video game. It’s a nearly flawless take on the adventure genre, with plenty of collectibles, a rich, detailed story, and an art style that brings that story and world to life. While it’s more similar to newer Zelda games than older ones — and is in fact more restrictive, linear, and plot-driven than they are — the execution is ideal for the type of game it aspires to be. No Zelda fan should pass it up.