Game Grumps: A Link to the Past 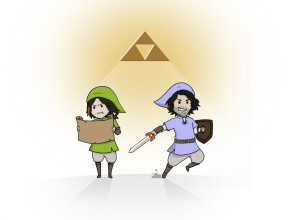 Arin “Egoraptor” Hanson and Leigh Daniel “Danny Sexbang” Avidan, also known as Grump and Not-So-Grump, are the Game Grumps. The Legend of Zelda is no stranger to the Grumps, with Daniel having played the original Legend of Zelda and The Adventure of Link to completion on the channel. Arin meanwhile has completed the HD version of Wind Waker. Now the Grumps turn their attention to A Link to the Past, with Danny taking control of Link Smeef in their attempt to save Hyrule. Watch the video after the break!

Long-time Grumplings might remember when the previous Not-So-Grump, Jon Jafari, was still on the show the Grumps played A Link to the Past as well. They never finished the series, so now it is up to Danny to bring down Agahnim and save the seven maidens.

Some of you might also remember that Arin made a video for the series Sequelitis he hosts on his own channel where he took a look at A Link to the Past and compared it to Ocarina of Time, in which he preferred the former.

Are you curious to see what the Grumps have to say about A Link to the Past? Or are you one of those people who think Arin should be crucified for harshly criticizing Ocarina of Time on the internet? Please share your thoughts in the comments below!