I recently got the Xbox 360 and assasins creed 3 at the same time. I have been addicted to the game since then. I found the graphics amazing and the gameplay even better. What are your opinions on the game? Do you like it or not?

George Washington was not as well portrayed as he was in Conduit 2.

Oh boy, an Assassin's Creed III thread. Alright, let's get this under way. Disclaimer to the OP, I am an avid Assassin's Creed fan, and am prone to straying to previous titles. Some comments may reference earlier installments, so do read at your discretion, as it seems you have started the series with this game. Big mistake in my opinion, but hey, I started with Assassin's Creed: Brotherhood when it first came out.

Let's get the bad out of the way. Glitches. If you haven't noticed, there are Elder Scrolls-caliber glitches in the game. This is because they're experimenting with the engine, AnvilNext. This engine is much stronger than the previous, and can support up to ten times more people - err, AIs - than previous installments. You might not have even noticed the glitches because the day 2 update cleared up quite a bit of the glitches. However, there are still issues with the lips being out of synch, and various other issues.

Now to touch on RegalBryant's comment about Washington. I didn't care for his character like I thought I would. I was expecting to have more involvement, since we were supposed to be his "personal Assassin." That never happened. I did enjoy looking at him in the Templar's way of him being a coward, though. I also was irritated with the fact that


Charles Lee didn't burn down Connor's village. Washington ordered that, and his men did that, but Connor still aligned himself with Washington. Only thing I can figure from that is he was taught the ideology of the Assassins from Achilles, and therefore knew he had to continue killing the Templars, even if that meant working with the man he should be killing. That's resolved in the DLC, The Tyranny of King George Washington, anyway.
Now to combat-related things. I loved it. The change in countering and disarming was much smoother. I also liked that killing enemies with bayonets - the colonial equivalent to spears - was actually counter-able now. It was next to impossible as Ezio. It was also great to have the Jägers - Hessians in your history books - be able to counter your own counter. Without enemies being able to hurt you when you try to counter them, Connor would have been the equivalent to a Spartan fighting neanderthals.

The combat itself was smooth. The kill streaks were great, as were the killing animations. I appreciated the different weapons, and I found it to be more varied than previous installments. While I was content with my Sawtooth Sword, I did enjoy using the Assassin Tomahawk. Many people don't realize that the default Tomahawk isn't the only one - there's also a Stone Tomahawk. It seems about as strong, so I switched those two, since the Stone one is much more primitive and interesting. I'm yet to find the Mohawk Armor, but the concept art (above) has me drooling.

Let's go to music next. I found a lot more tracks than in previous games to be forgettable, but this is for good reason. Lorne Balfe was the composer this time around. Lorne's strengths seem to be focused around the main themes, but weakens with the less important tracks.

You may be wondering why he shined in Assassin's Creed: Revelations but not so much this time around. He had the honor of working alongside Dutch composer - and longtime composer of the Assassin's Creed series - Jesper Kyd. Kyd excels in less important tracks - Salvation of Forli, anyone? - and is in turn complemented by Lorne Balfe's ability to make the main theme powerful.

Jesper didn't work on the series this time around because he was working on Darksiders II's soundtrack. I find it a bit odd that he released this information this summer, whereas the series has been in the public eye since January.


For a great track of Lorne Balfe's, look no further.

Now for some more gameplay thoughts. Naval Combat is the first that comes to mind. I was skeptical of this, but was amazed by it almost immediately. Alex Hutchinson promised to be as historically accurate as possible, but I never imagined this. It felt like something I'd see in a pirate movie, yet oddly better. It was more realistic. It wasn't simply shoot-and-board - there was more shooting than anything.

Another thing you rarely hear in the movies is the captain screaming "Down, down!" as an enemy ship fires at you. Every shot matters in this game, and it really shows. The use of waves is also amazing. Using it to your advantage - from giving your shots more distance, to watching your enemies' shots hit a wall of water - is simply fantastic. I think this was one of the game's strongest points.

Side missions make the game much longer than anyone could imagine. Liberating the cities is a much longer effort than simply killing a Borgia Captain this time. By helping the colonists, you can gain another Assassin recruit to add to the Colonial Assassins that Achilles labored to establish.

Unlike previous games, the Assassins can do some helpful things. While aiding you in combat is still important, escorting is also a possibility. This charade can help get you past some pesky guards that are on the lookout for you. It's much more efficient than simply killing your way into a restricted area.

As for other side missions, you can enjoy more naval missions, courier assignments, Homestead missions, and missions for the Hunting Society, as well as other minor factions. While Courtesans and Mercenaries may not be around anymore, there are plenty of other groups to help out. They might just help you out in the long run, too.

Tying into this, notoriety can also be gained from these various side missions. Notoriety - even at level one - can be an enormous pain. Simply jogging by a couple of guards will result in them detecting you, and one of the most agonizing attempts to escape may be imminent. You either try to escape, or fight back, inevitably raising your notoriety to a higher level.

Trying to escape can be painful. With the lack of tall buildings, it can be hell to shrug them off by running. The lack of hiding spots can also be agonizing. Your best bet is looking for tall grass, but mobile hay patches can be a life saver.

And now for my favorite topic; story. The story this time around wasn't as compelling as I would have liked, but I found certain events to be amazing. Example? The attempted hanging of Connor. At worst prior to this, Ezio witnessed his father and two brothers hung for treason. However, this time around, you, the Assassin, looked through the burlap sack and felt the noose tighten around your neck. 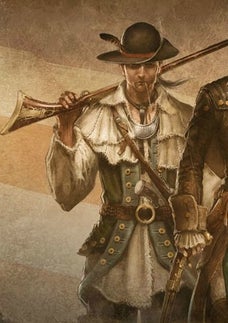 Small events like this make the game extremely interesting. Connor is my third favorite Assassin - hey, at least he beat Desmond - but I find his motivation to kill the Templars to be just. At least until he finds out Lee didn't burn down his village. Then his motivation sticks with the Assassins for the remainder of the game.

The one thing that made the game as great as it was happened to not lie in the Assassin, but rather in the Templars. I felt the Templars were greatly developed in this game - even better than previous games, which did a sufficient job as well. My favorites had to be Haytham and Thomas Hickey.

Haytham was among one of the finest Templars in the series. He's my second favorite, after Assassin's Creed: Revelations' Templar-aligned Anatolian executioner, Shahkulu. Haytham, a former Assassin, was the first real insight that showed the Assassins and Templars were only different in philosophy. Haytham was also one of the few Templars outside of the Animus Training Programs - Multiplayer mode - to wield a Hidden Blade. He also was one of the three Templars to perform a Leap of Faith.

Haytham was an interesting father figure to Connor, or a lack of one. During his adolescent years, Connor was taught by Achilles Davenport that he'd have to kill his father if the opportunity arose. Once finally meeting his father, and collaborating with him to kill Benjamin Church, Connor was skeptical. Haytham however, was not. In a small struggle, Connor overpowered his father and killed him, triggering my favorite White Room conversation to date. That in itself is an accomplishment, because White - and Black - Room conversations have always been a favorite part of the game for me.

Haytham Kenway said:
Don't think I have any intention of caressing your cheek and saying I was wrong. I will not weep, and wonder what might have been. I'm sure you understand. Still, I'm proud of you in a way. You've shown great conviction, strength, courage, all noble qualities. I should have killed you long ago.
Click to expand...

Charles Lee was also a fantastic Templar. While he played little presence onscreen, his name came out of everyone's lips. However, he didn't reach his full potential until his death was imminent.


A weary Connor stumbled into Monmouth. One hand held the gash in his stomach, his fingers soaked in blood. His breath came in rasps as he stumbled towards an equally hurt Charles Lee.

The injured Assassin grabbed a chair and sat on it. He let out a gasp of relief as he felt some pressure lifted from his shoulders, but he was still not well. His war paint was the color of the blood dripping out of his stomach.

Charles watched him carefully, studying his face. In his hand was a beer. He took a long drink of it, trying to drink the pain away. With the bullet still in his stomach, he offered his longtime enemy a swig of the liquor. For a moment, the Mohawk seemed distrusting of the drink before taking it and drinking from it.

Charles let out a final breath before he looked down at Connor's knife. He felt the pressure of the Assassin's hand on his back, and allowed his adversary to push him onto the blade. In his final moments, he remembered Connor's promise to kill him. It had finally happened.
Many people are not fans of the ending to the game. Many people find


Desmond's death
anti-climactic, and it's true. Once he touched the pedestal, it seemed rushed. A heartfelt speech between Desmond and his father should have come prior to Desmond shooing his father and friends away. The two always had tension, and looking back, William saying that Desmond could see his mother when the ordeal was over breaks my heart.

I think it was rushed because Ubisoft wanted to release the game before the year was over - Assassin's Creed has annual releases now, after all. For this reason, some things were no doubt rushed. Two examples already touched on? The ending and the glitches. If they had more time, they wouldn't have needed an update to fix the glitches, and they could have made a more climactic ending.

Overall, I loved Assassin's Creed III. It's my second favorite in the series - after Assassin's Creed: Revelations - but it's far from perfect. This game made great strides, and I look forward to the next installment, as well as what they have in store for the game now that a new modern-day protagonist - as well as a new Assassin - is in demand.
Last edited: Nov 24, 2012
You must log in or register to reply here.