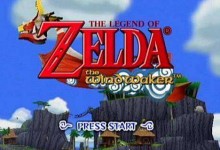 The title screen for any video game is very important. With just a few seconds and a blinking “Press Start,” developers have a chance to draw players into their game worlds and get them ready for the hours to come. Over the years the Zelda series has featured numerous well-made title screens, from the iconic music and vistas of the original Legend of Zelda and Ocarina of Time to the chilling view of Termina’s doom that marked Majora’s Mask. Overall, barring the pre-DS handheld games, they tend to have one thing in common: they show some impressive scenery from the land of Hyrule (or Termina, etc.) and feature a song specially chosen for that game’s mood. Today’s music feature focuses on one such song.

The Wind Waker has been getting a lot of attention lately with the announcement of its HD Wii U remake. Who’s complaining, though? At least in this writer’s opinion, the cel-shaded classic from the annals of Zelda history is easily one of the best in the series and has the music to show for it. Even a decade later, music like the tune we’re looking at today has never been The Wind Waker‘s weak point.

Author’s Note: I just want to give a brief shout-out to GilvaSunner, the YouTube user whose videos I use every week for this music feature. The strong audio quality and consistent style and design of their music uploads make my time with this feature much easier considering I don’t have to fish through YouTube finding a quality soundtrack piece. Plus, they always list the composers, which is extremely helpful to me as well. Thanks again, GilvaSunner!

The Point
As I mentioned above, the entire purpose of a video game’s title screen is to help introduce the player to the game. Many times, this purpose is dedicated to a skip-able “intro video” that plays prior to the title, leaving nothing but the game’s title itself on the title screen. An iconic example of a title-only screen is the Resident Evil series, which always features an intro video followed by the iconic growling voice stating the game’s title. It’s creepy, it’s simple, it’s memorable and iconic. Overall it really draws a person into the mood of the games.

That isn’t Zelda’s style, though. Most of the games (except, again, many of the portable ones) prefer to blend the introductory video and title screen into one. Gamers are treated to views of the incredible worlds Link will explore in the game while the title and logo steadily fade into view; Ocarina of Time and Twilight Princess are both excellent examples of this. This is the first step towards showing the game’s world to us . . . but something else is necessary.

Music does a lot for the Zelda games. We always remember the classic fields, forests, towns, and mountains of Hyrule by their music. But what of the first music we hear in the game? This music cannot just favor a single location or event of the game, it needs to favor the game itself. It needs to tell us something of what’s to come. Steep job for a song, no?

For The Wind Waker, there is a lot to tell the player right off. The ocean, island life, the hero, the sages . . . so much has to be hinted at here.

The Sound
A deep but not quite tribal drum beats out a steady rhythm. For three measures, nothing accompanies it but four light strums of a stringed instrument. In these few seconds, the game has opened up on a perfect blue sky and a ship has sailed into the foreground, bearing the game’s title upon its side. Behind the ship we see the camera pan over an island. A young boy stands on its high cliffs, taking in the sea air and watching the wind play across his world as a sprightly flute joins in. Playing like it has just come from an Irish celebration, the flute carries its tune quickly and brightly. It’s cheering, to say the least.

Some seconds pass and bagpipes join the song. They amplify the flute’s message until both drop out to allow a violin to play its part. So far, hardly more than half a minute has passed and we have been greeted with gorgeous scenery and eccentric music to go with it. By the time the song reaches its one-minute mark it has carried us through a steady intro that led to a burst of song and moved into a crescendo of rapid, skillful playing that all chimes together beautifully.

The song is overall very light and happy for a Zelda opening theme. It still carries an adventurous tune to it, but overall it is simply filled with a vigor that would cheer up anyone. Plus, weaved into the tune by the flute and violin are the harp and cello parts of Medli and Makar’s songs, respectively. It is a lovely introduction to the game overall not to mention being an incredible tune on its own.

The Verdict
I love this song. The way it rises and falls, lifts the spirits, and brings an infectious cheer to its listener is all so perfectly crafted that it is just a pleasure to listen to. In its attitude, we hear a brimming excitement for adventure. In the timbre of its instruments we feel the exotic yet homely wonder of the ocean and its islands.

I would consider this to be one of the best parts of an incredible soundtrack, and half the beauty of that comes in the way that it works outside of the game. I have spent the past month trying to convince a certain girlfriend of mine that this is the song that should finish out our wedding ceremony. I sent it to a friend last night when she told me she needed cheered up (it worked). It is simply a wonderful tune, plain and simple.

So enough of my rambling . . . how do you like the song? Did you enjoy The Wind Waker‘s soundtrack? Do you expect the music to be changed or otherwise updated for the HD remake? How do you think this song compares to other Zelda title themes? Are there any favorite Zelda tunes you would like to see featured here in the future? Let me know in the comments!

See Also
The Staff Roll theme features an extended version of this song that also incorporates “The Great Sea,” “Outset Island,” and “Zelda’s Lullaby.” Easily my favorite variation of the theme.
The original title theme for the game that was only seen in its 2002 E3 demo version is also interesting to look at; it features a newer rendition of the classic title music of A Link to the Past accompanied by seagulls and ocean sounds. Very nice.