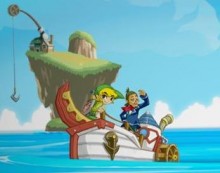 For this week’s feature I felt it would be appropriate to answer two common requests I’ve received in the past few weeks, especially since the songs are from the same game. First, following my Companion Themes series there was a lot of love shown for Linebeck. The cowardly but lovable ship captain from Phantom Hourglass was unfortunately excluded from my companions series because he is not technically the game’s companion. Today, though, he has his chance to shine!

Alongside Linebeck, I also saw a number of readers last week requesting a look at the more subdued theme song of Oshus, the wise old man who gives Link assistance throughout the game. Jump on in to see my take on these characters’ music!

To begin, let’s look at “Linebeck’s Theme.” First, as a little side note, I made a mistake last week and linked to a video that faded out after less than two minutes of music. To remedy my shortcoming, I instead chose a full ten-minute version of this week’s main focus. You may now listen to this awesome song for a whole 1/144th of your day. You’re welcome.

On a more serious note, this is by far one of the definitively shining moments among Phantom Hourglass‘s soundtrack. Even though you only hear it for short spurts (specifically during a particularly hilarious scene involving the sailor) the song still sticks out and is a favorite from the game. The reason? This song captures Linebeck’s character like none other. Linebeck is, in short, a goofball. He talks tough and acts like he is the true hero of the story, then ducks behind the nearest object and sends Link off to save the day.

It’s hard to hate the guy though; he’s just too… fun. His song captures these key parts of his attitude. It begins with a dramatic opening, but after a short pause it rolls into a tune that is equal parts adventure and comedy. Played on a booming orchestra this exact melody could just as easily be Link’s theme music. However, the song instead flaunts a combination of a harpsichord and low brass toots accompanied by the sharp tapping of a snare drum. It is simultaneously whimsical and adventurous… like a man who wants to be heroic but is in fact only a bumbling, lovable fool. Sound familiar? That’s how spot-on this song is.

Near the end of the game, in a surprising (and SPOILER-filled) turn of events, you wind up fighting a possessed Linebeck as the final boss. The music during that scene includes an awesome remix of his theme that should not be missed; be sure to check it out for yourself!

Now for the other popular tune from Phantom Hourglass: “Oshus’s Theme!” Another high point for the game’s soundtrack, this song is significantly more subdued than Linebeck’s. That is not without good reason. Oshus is the wise old man who rescues Ciela when she washes up on the shore of Mercay Island, and also (indirectly) bestows Link with his first sword in the game. He continuously shows up throughout the course of Link’s journey to impart his wisdom and later plays a very key role in the course of things. There is much more to his character than simply the wise elder, but the man you meet at the beginning is all you really need to understand to truly feel his theme.

Quiet and almost mournful, the song would make a fitting tune for a cottage getaway. Backed by the constant strumming of a small stringed instrument, the main focal point of the song is the sweet and melodic strains of the flute that make up most of its melody. It is a simple tune with a fair amount of repetition and softly flowing rises and falls. Its simplicity does not in the least detract from the song’s power; it is a gorgeously soft and eloquent theme, and while it doesn’t quite stack up to other songs in the series it is still very nice to listen to.

What are your thoughts? Are these among your favorite Phantom Hourglass songs, or are there other memorable tunes that stand out to you? How do these themes stand out in the series as a whole for you? Also, I’m always looking for more Zelda music to write about so be sure to let me know others you’d like to see me cover! That’s all out of me for this week, so I’m signing off and will be back same time next Monday. Have a great week!