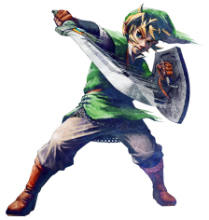 Skyward Sword was one of the most hyped games in 2011. Since its release, most fans have been amazed by its accurate 1:1 motion controls and immersive gameplay. It seemed as if Skyward Sword held its own against other huge titles that launched along side it, even winning many fan votes for game of the year. With a game as incredible as Skyward Sword, when something negative is said, our ears tend to open up to hear exactly what could be so bad about it.

Recently, 1up has posted an article listing some of the places that Skyward Sword has fallen short. I agree that some aspects of the game seemed a bit lacking and could have been improved, but even with these flaws, it was still a great game. While some of their reasons seem to hold no weight behind them, a few seem to make it onto my list as well. Make the jump inside for more.

In 1up’s article they mention five separate reasons as to how Skyward Sword went wrong. In their words, they felt that the content was spread too thin, it had an unchanging world, a lack of exploration, a lack of character, and one supremely annoying sidekick. Now, I can see how each one of these issues could have brought the experience of the game down a bit, but not nearly enough to be an issue of its own.

Arguing with these bold statements, I could say…

Content Spread too Thin
The content wasn’t spread too thin. In fact, it had more than enough to keep me satisfied and wanting to progress even further through the game, just to discover anything new that I might have missed. From the cinematic and npc interactions, to collecting items and upgrading your gear, this game had plenty of content.

An Unchanging World
Due to the fact you could only go from night to day by sleeping and the lack of “season” areas in the game “like snowpeak”, the world did seem a little “unchanging”. Nintendo did answer this by making new areas accessible each time a new item was obtained or if you progressed to a certain point in the game. Also, new mini quests became available in Skyloft each time you revisited the area after completing key points of the story. The biggest change to the world would have to be when doing the quest for the dragon in Faron Woods or the changes to Skyloft and the Forbidden Grounds toward the end.

A Lack of Exploration
To me, the game didn’t lack exploration at all. Sure, we didn’t have a huge open field to freely roam, but instead Nintendo added depth to the parts of the world that were available to us and added in a ton of items to collect along the way.

A Lack of Character
Saying it had a lack of character is just a bit outrageous to me. I found that compared to other games in the series, Skyward Sword excelled in this aspect. Much like Majora’s Mask, almost every NPC had their own personality, story, and even had their own side quest for you to do. The cinematics between Link and Zelda alone showed enough personality and character to keep me happy.

One Supremely Annoying Sidekick
Last, maybe Fi did come off as a little annoying, but I have come to think that maybe Nintendo made her this way because of the way fans “recieved” Navi as. I never found Navi annoying, but due to the overwhelmingly popular hatred fans have for her, maybe Nintendo decided to portray Fi in the same way they thought fans thought of Navi. After all, even though Navi is known as the most hated and annoying sidekick of the series, she is still the most well known and favorited by fans. Maybe Nintendo wanted to make Fi’s personality one to remember, just how Navi has been so well remembered almost 15 years after her debut.

Where one person may think something isn’t up to par with what they expect, another might think it has exceeded every expectation. Whether you agree with 1up, me, or even have your own thoughts on the subject, let us know in the comments below.