Posted on September 11 2020 by Heather Beard 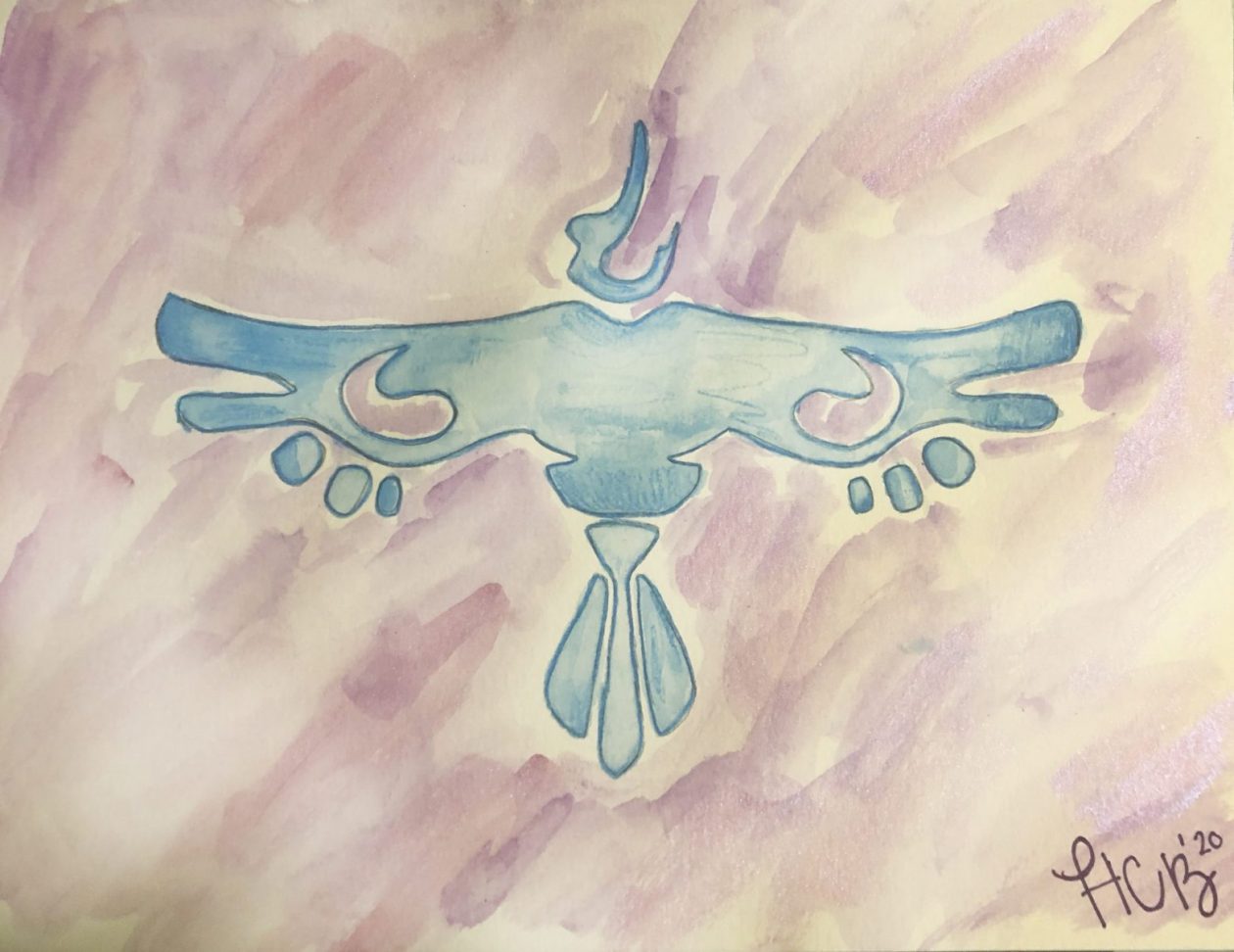 The elder’s words rang through my head again. “Princess Zelda will be visiting Rito Village again on official business this week. She will have the knight — Link, and a few others with her. Be sure to greet them when they arrive.”

The last person I wanted to see was Link. The princess I was fine with, but that insufferable knight, not so much. His silence continued to infuriate me. I felt as if he thought he was better than me. I wondered if anyone knew what he was thinking, and whether he knew something that the rest of us didn’t?

On the day of the princess’ arrival she met with the Elder and I tried to strike up a conversation with Link. For the elder’s sake I could at least make an attempt at being cordial, we were all Champions after all, even though I was the best. I watched as Link gazed upon Vah Medoh in the sky as the beast circled the village. I thought there was no better way than to fly in and make a grand appearance. I ducked off the nearest flight deck and used my gale to fly up in grand gesture. The wind rustled his hair and he took a step back startled.

“Impressive, isn’t it? Very few can achieve mastery of the sky,” I grinned. “Yet, I have made an art of creating an updraft that allows me to soar. It’s considered to be quite the masterpiece of aerial techniques, even among the Rito.”

I took a prideful stance and glanced at the knight, wondering if he was even listening to my speech. He gazed at me, but remained silent. “With proper utilization of my superior skills, I see no reason why we couldn’t easily dispense with Ganon.” I hopped off the railing and strided forward. “Now then, my ability to explore the firmament is certainly of note,” I took Link by the shoulder, “but let’s not — pardon me for being so blunt — let’s not forget that I am the most skilled archer of all the Rito. Yet despite these truths, it seems that I have been tapped merely to assist you. All because you happen to have that little darkness-sealing sword on your back. I mean, it’s just… asinine.” I glanced at him. I needed to intimidate him. “Unless… you think you can prove me wrong? Maybe we should just settle this one on one?”

Link looked at me curiously, and I wondered if he would take my bait, but still he remained silent, “But where…? Oh, I know! How about up there?!” I gestured to Medoh as it hovered above us. “Oh, you must pardon me. I forgot you have no way of making it up to that Divine Beast on your own!” By that point I was frustrated; no comment, no words, no sound, he just stood there emotionless! I decided I would take a chance and performed my masterpiece move, even though it was still so new. I knew it could fail, but I still took the chance, and it was worth it. “Good luck sealing the darkness!” I called out as I flew away. He would not be provoked into facing me. Our conversations were a huge waste of my time. I knew that I would find solace with Vah Medoh after attempting to talk to that guy. What was wrong with him? Why wouldn’t he face me?

I spent the rest of the day high among the clouds. Medoh circled the area and I gazed down at Rito Village. Lights in homes were beginning to be lit and stars soon filled the sky. Another day was gone. Another day where the Calamity had not returned, though within the depths of Medoh I could feel a stirring. It was as if the beast was telling me to remain vigilant in my training. Over time Vah Medoh and I had formed a strong bond and I knew that it wouldn’t communicate like this if it didn’t feel like something was about to happen. I walked to the heart of the beast and placed my wing on the warm, stone panel. It glowed under my feathers and the warmth grew hotter. “I know. There’s been a wind of change, but I’m unsure what to make of it. I wonder if the princess’ visit had anything to do with it.” The stone grew hot again. “I’ll have to go back down there eventually; maybe he’s gone. I shouldn’t let him get to me. I know that I am the best.” Medoh roared in confidence. “I knew you would agree.” I bid the Divine Beast farewell for the night and flew back down to the village. The elder was waiting with a solemn look at one of the flight decks and I chose to land there and greet him.

“Good evening Elder, I hope you are well,” I said with a bow.

“Master Revali, just the Rito I was hoping to see. I have some things to discuss with you. Would you join me?” the old owl asked, gesturing back to his hut with his cane.

“Of course.” I adjusted my bow on my back and followed him up the stairs.

“The princess and her knight were here today. The princess told me that she wishes for all of the Champions to join her at Hyrule Castle once again. I know you have been spending a lot of your time training with Vah Medoh, but I do believe we will manage on our own if you were away for a while.”

We had arrived at the elder’s hut and I made myself at home on one of the embroidered cushions. “If you believe that you and our people will be alright without me for a few days then I shall go. I do hope that Princess Zelda did not arrive with grave news?”

“Not entirely, but it was more a formality than anything. She was here on official business. She observed the nearby Shrines and learned more about Rito culture. She wanted to extend the invitation to you in person, but you had flown off to train with Medoh by the time her and I had finished our meeting.”

I grimaced thinking about the afternoon. “I hope I did not offend the princess with my absence this afternoon.”

“Of course not. She was quite impressed by your skills. We saw you showing off to the knight. Though, I do believe that you may have been trying to provoke him?” The Elder stifled a laugh and straightened up. “Though I imagine it was all in good competition. We understand your need to train. The princess told me that she wouldn’t mind me relaying the message in her stead.”

“Of course, I do appreciate you relaying her message and both of your understanding for my being away. It was a pleasant afternoon training with the Divine Beast. I do believe that Medoh and I have created a bond that cannot be broken. We will be ready when the Calamity strikes,” I said with a smile. It was true that I was training, but I mainly flew away to rid myself of Link.

The elder clapped his wings together, “That is wonderful news. I imagine that you’ll leave for Hyrule Castle in the morning. The princess did stress that she hoped to have everyone together before the week’s end.”

“Yes, I can leave at first light, and with my speed, I’ll likely arrive before the others. Medoh will be here to protect the village while I am gone.” I stood up from the cushion.

“Thank you Master Revali, for your service to the Rito, and to Hyrule.” The Elder stood up and clapped me on the shoulder. “You are a fine young man Revali, and you are the pride of the Rito. Do remember not to let your own pride get in the way of friendship though.” He winked and waved as I left.

I took that as a sign that he knew of my true motives with Link this afternoon. I was trying to provoke him, but I could not imagine being friends with that guy. Though maybe I could stand to be a little less prideful and a little more cordial. I gazed up at the stars again. Pride of the Rito, the Hope of the Rito — these were titles that I would and could wear proudly. But friend of the Champion Link? That would likely take more time for me to earn, and would I ever earn it? For a man who spoke little, if ever at all, how would I know if he considered me a friend? I knew that we were not enemies, but I got the feeling that he was as prideful as I was.

Comments
Sorted Under: Breath of the Wild, Fan Fiction Friday, Games, Original Content, Slider
Tagged With: No tags were found for this entry.