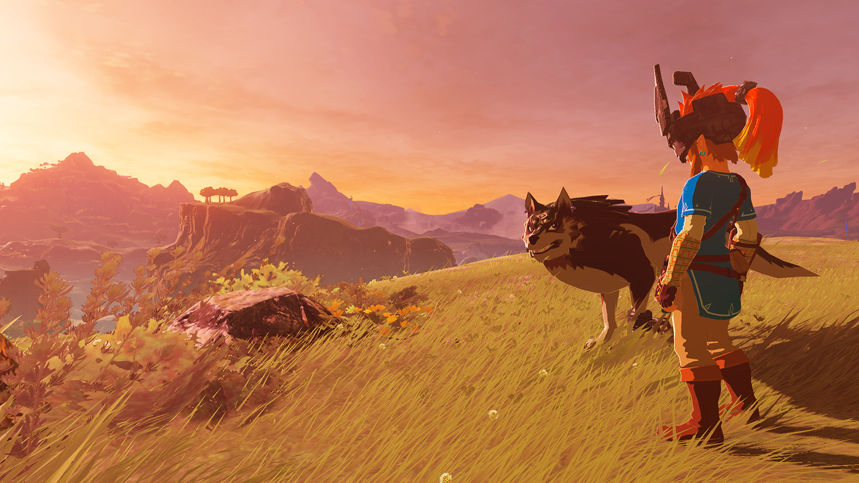 “At last, Faron Woods,” Link announced in relief. “That was quite the lengthy trip.”

“And you almost got us killed,” criticized Friend, Link’s mammothian companion of a horse.

“Link, you really should get some rest,” insisted Makar, soft toned. “You can’t go on like this for much longer.”

“No, no…I can’t. Not until I have Storm back. I can’t afford to waste a single moment.”

“If you try not to waste a moment,” Friend said, “you may very well end up having no moments to salvage.”

Link was silent for a minute before responding. “Fine, I’ll…I’ll think about it. But not until our business here is done.”

“Very well. But should such an instance again occur where any of us come close to falling in battle, I will take you straight to a stable and not leave until you are well rested.”

“And should I go off on my own?” Link replied, snarkily.

“Then your fate shall rest on that of the mercy of the world and its many dangers. I shall bare no responsibility – nor shall your friend, Makar.”

Link was silent, but both Friend and Makar could sense the negative energy radiating from him.

“Link, please,” Makar pleaded. “Please, you must take care of yourself.”

“Most certainly,” answered Friend in strong and calm voice.

“If it means you’ll be safe, yes,” replied Makar.

“You could say that,” answered Friend, a somewhat mournful and remorseful tone taking over his voice. “As was the case with Makar here, you will be compelled forward by a mysterious voice. Though I believe it will be a matter of three this time.”

“Three. My friend…or whatever he can be called…I sense that his soul was split into three. Find the three pieces of his soul and reunite him with me, and your contract with me shall be fulfilled.”

“That’s all?” Link asked, taken aback. “Where should we start our search?”

“Where should you start your search, you mean. You must calm yourself and listen. Only then will the voice reach you — and you reach it.”

With that, Link steadied and dismounted Friend. He sat beside a nearby tree, crossing his legs and straightening his back against the trunk in meditation. He searched and searched, deep and deeper, until he heard the faint sounds of a voice.”

“Hylian…Hylian…” the voice began to grow louder. “Hylian…Champion of Hyrule, reincarnation of Hylia’s hero, whose legend has stood since time immemorial. I ask but this of you for now: seek me. Follow my voice, collect the parts of my soul, and reunite me with my friend. Do so, and I shall reward you with great power…and the aid you seek in reuniting with your own friend, whom you greatly grieve.”

“I understand,” Link whispered to himself. Taking a deep breath, he hopped back on Friend and set off as this mysterious voice directed him.

Link opened the chest to find an odd skull mask with protruding horns and red hair. “How peculiar. Though, I guess not really,” he muttered to both himself and Makar.

“Maka-” Friend began, before being cut off by Link.

“I’m sorry, but it is you who must go away…for now,” Link stated to Makar. “You’ve been a great guide and friend up until now, and I promise to bring you back soon. But for the sake of the mission, and for Storm, I have to wear this entire outfit. Understand?”

It was now Makar who was trapped in a moment of silence. “Y-yes, Link. I — I understand.”

“O-okie dokie!” Makar responded, a few hints of glee, relief, and anticipation in his voice.

With that, Link pulled Makar off his face and slipped him into his pouch. He then proceeded to retrieve the strange trousers and caped body armor found in the previous two chests. Dressing  from bottom-to-top, Link felt as though he were being consumed by some darkness. He could feel it, and he was sure Friend could — a dark presence emitted from these pieces of clothing. What dangers was Link about to uncover? He finished his dressing by slipping on the mask.  Then he was consumed in a wave of darkness, and his vision changed to a faint hue of red.

Link struggled to breathe at first, falling down to one knee as he tried to catch his breath. He also felt as though his body were fading into nothingness; like a shadow or a phantom. It would be a few short moments before Link regained his full strength and consciousness – what little was left in his sorely sleep deprived state — though it felt like an eternity.

“Link… Champion of Hyrule, reincarnation of the so called “Hero of Time”…I, Ganondorf, King of the Gerudo, command you. Obey my will!”

WHAT?! thought Link. GANONDORF?! Quickly, he tried to pull the mask off, but it was no good — it was so well attached, so well sealed to him, that it felt he would be pulling off more than a mask should be be successful. He stumbled back a few feet before shortly regaining his footing and then arching his back to have both hands resting on his knees as he panted for air.

Link tried to speak, but the words would not — could not — come out of his mouth. So, he tried to speak inside himself, aiming for the source of his new captor. Who are you? What is the meaning of this? Why do you call yourself by that of the Great King of Evil?

Because I am him, the voice replied, an evil twinge to it, accompanied by just a slightly detectable layer of glumness. At least…I thought I was.

What…what do you mean? Link demanded.

I am…or was…the Phantom of Ganon. Ganondorf, the Great King of Evil, broke me off as a detachment from his soul and made me to fight the Hero of Time…a previous incarnation of yourself, preceding countless millennia. However…I was too weak. I could not defeat the Hero. I had failed my own purpose, the very reason for which I exist. As punishment, my master – my creator – vanquished me to the void. It was only through some strange magic some thousands of years later that I was recovered…and relegated to armor to be worn and appropriated by the tyrannical Hylians.

Tyrannical? Link thought scornfully. What are you talking about?

Oh? Typical of the Royal Family’s dog to go oblivious to the sins of the kingdom which he swears his life to defend. You see, boy, the Hylians have long been prejudiced against the other denizens of Hyrule…especially my people, the Gerudo, who struggle every day, not knowing when a beast may invade our homes or when the desert may consume us, or heat melt us from the inside out. My people only wanted to live among the Hylians; to live as equals, to live peacefully. But the Hylians revoked us and sparked a bloody civil war — placing the blame on us, of course.

That is not a tale present in the history books of Hyrule…not even any ancient copies I know of, and my training as a royal guard and Champion was quite extensive in the ancient lores of Hyrule.

Heh! Perhaps your training merely gave the illusion of being “extensive”. As if someone with the case of your amnesia should be able to remember that anyway. Yes, I know of your amnesia. Actually, I know all about you, but that is neither here nor there.

Even so, the Hylians of today, and of 100 years ago, are not the Hylians of your time. They are good people, with good relations with the Zora, Goron, the Rito…and even the Gerudo.

The Gerudo, you say?

Yes. They even helped in trying to defeat the evil beast, Calamity Ganon; though they failed…we all failed.

Most unfortunate… But if you say the Hylians and Gerudo have good relations, well, I suppose I should believe you. I don’t see why the Champion, the hero, puppet of Hyrule would have any basis to lie…considering he was probably told little of the kingdom’s true past. Besides…I do have uses for you.

Yes, of course. You did not think I was to help you without you first helping me, now did you?

You really are dense, aren’t you. I’m sure the princess could attest to this.

Nothing, he chuckled. As you now know, I was born of sin…terrible sin. The Hylians may have waged a war of blood and prejudice, may have a mountain of sins under their belts…but the vile acts of Ganondorf, King of Evil, are not excused. As such, I wish to make up — no, atone for what he did before and after my time. They may not directly be my crimes, but I still feel a sense of responsibility. As such, I will take that responsibility by the reigns and fulfill my atonement.

That is noble of you, and I will agree to help you. Now, what should I call you?

Both were silent in their thoughts towards each other for a moment, though Phantom Ganon noticed a recent memory of something gargantuan and magnificent —

Yes…yes! Ganondorf shouted — or thought with glee. My old companion!

Operating without control of his own self, Link rose and spun around.

“Old friend!” Link spoke, but…didn’t. The voice coming from Link was not his own. Nor was it his own conscious. It was as though Ganondorf were speaking through him.

Because I am speaking through you, Ganondorf told Link, silently.

“Old friend…” Ganondorf continued. “Old friend. No! You are not him. But you remind me of him.”

“That may very well be because I am descended of him, Old Friend.” Friend greeted, warmness in his tone. “It has been quite some time.”

“My old steed. I can tell that you are descended not from the steed of Ganondorf, King of Evil, but from my own…”

“Yes. It would seem as though you and he were removed from the void forever. If my memory serves me correctly — which I believe it does, as it contains those of your old friend — my line became an object of the royal family’s, before I escaped the Guardian-swarmed stable all those years ago. I did not wish to be taken back to Ganon, as I hold the same resentment for him as you, whether he be reincarnation or otherwise.”

“I see, then, that we are on the same page. It is good to at last be with you again…or to meet you…Gilgamesh.”

“Gilgamesh…but I am no descendant of heroes.”

“In your eyes, perhaps. But you are nonetheless the descendant of my companion…my own hero.”

“It…” Gilgamesh seemed on the verge of tears. “It is an honor.”

“I am glad.” Phantom — and Link — climbed onto Gilgamesh’s back and set off for the west. At last, two friends, separated by time and fate, had reunited.

John Piland is a guy just trying to make his way through life and not be consumed by his chronic addiction to memes. Feel free to talk with him about Zelda and Nintendo on Twitter.

Comments
Sorted Under: Fan Fiction Friday
Tagged With: No tags were found for this entry.