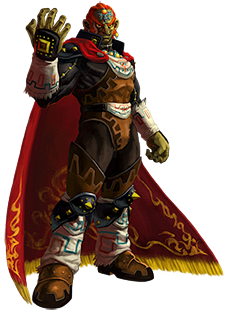 From the very beginning, Ganon has been the main antagonist of the Zelda series appearing in most titles. For a long time, he was the rarely seen enemy to Hyrule and kidnapper of maidens. Yet it was not until 1998 when Ocarina of Time was released that fans learned of his true origin. It is well known among fans that Ocarina of Time had an enormous impact upon the series as a whole. More than bringing Zelda into 3D, the universe the takes place in was greatly elaborated upon, calling attention to characters with deeper levels of complexity and attributes of their own. Many aspects of the mythology of the series were brought to light or at least expanded in the evolving universe. This included such things as the names of the Goddesses who created the very world, to even a translatable written Hylian language. Suddenly the story and the characters were just as important as the gameplay; players could learn more of the individuals living in Hyrule. True character development was added to the tale for the first time for not only Link and Zelda, but the adversary behind the adventure, Ganondorf.

In the original tale Ganon, the great king of evil, led his minions into Hyrule, stealing the Triforce of Power and kidnapping the princess Zelda. This provided the purpose behind Link’s quest. However, little was known of the character. He was a large, blue monster resembling a pig who waited in his fortress on Death Mountain for would-be heroes to challenge him. There was no character development; when Legend of Zelda was released villains did not require intricate stories or motivations. All that was required was that they provided a reasonable challenge for the player and be that final obstacle for the player to overcome. Any more information would be left to the player’s imaginations to fill the gaps.

In the SNES follow-up, A Link to the Past, much more was revealed on the origin of Ganon. He was once a renowned thief ruler named Ganondorf Dragmire, who had unwittingly stumbled upon the Sacred Realm and discovered the resting place of the Triforce.

One day, quite by accident, a gate to the Golden Land of the Triforce was opened by a gang of thieves skilled in the black arts.

The name of this king of thieves is Ganondorf Dragmire, but he is known by his alias, Mandrag Ganon, which means Ganon of the Enchanted Thieves. 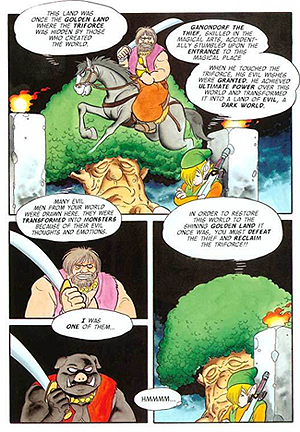 In this game his presence was elevated to that of an ancient, great, and powerful ruler of a shadowy Dark World sealed off from the peaceful Hyrule for many generations. His appearance maintained the large blue pig design of the original Legend of Zelda with greater detail, this time wearing armor and brandishing a trident. An explanation was given as to why he was in the form of a demonic pig; it was a magical property of the very world he resided in. The Dark World which he ruled over was stated to have the power to transform all who enter into a shape that best reflects their heart. The beast-like form of Ganon was attributed by fans to have been his transformation in that world. While A Link to the Past never gave the player any idea of his true form, Ganon was now solidified as a character with a history. He became more than a greater challenge at the end of the game to overcome; he was just as much a character as Link or Zelda. At the same time, however, his true form and where he came from was still left to the imagination of the player. There was only a mix of rumor and legend of the ancient thief king who claimed the Triforce after slaying his followers and became the King of Darkness.

“You are the only one who can destroy Ganondorf, the thief-no, Ganon, the evil King of Darkness!”

Ocarina of Time gave us the chance to finally see and experience the legendary Imprisoning War only mentioned in the manual of ALTTP. Not only did we witness just how Ganondorf finally acquired the Triforce for himself, but fans also got to see one long awaited detail: the man behind the monster. The mystery was revealed and fans finally got a chance to see the true look of Ganondorf before he became the great king of evil in the form of the blue pig they had known for so long. Ganondorf Dragmire was a tall, swarthy, red haired man known for his ruthlessness and ambitions to one day take the triforce and rule Hyrule. His humanoid look was attributed to the theme of the game, the developers were unsure that a monstrous blue pig would still work as the main antagonist again. However, to maintain tradition the great Beast Ganon did appear to combat Link using the powers of the Triforce.

Satoru Takizawa: In the previous Zeldas, Ganon has always been a pig. Though we wanted to do something differently this time, we still thought it would be best to have him as a pig in the end, but weren’t sure how to go about it. I was really worried, myself. I wanted to know what Miyamoto would think. In the end I realized Miyamoto wouldn’t be obsessed about anything like that, and just went through with it myself.

Along with his new unique look, his homeland and people were present in the game. During the adventure the player learned that Ganondorf was not merely the leader of a thief horde as the tale in ALTTP said, but a king of a unique desert society. He was the lone male leader of the Gerudo, a tribe of female desert thieves that lived in the far western desert of Hyrule. Their costume and culture appears to be greatly inspired by Middle Eastern design with a little fantasy adjustment for the envisioned universe. They are said to have a culture that prizes warriors skilled in archery and horseback riding, are very distrustful of outsiders, and reside in a fortress in the Gerudo Valley.

Allying his tribe to the King of Hyrule by swearing loyalty but ambitious for more power, Ganondorf was already on his quest for the triforce when he was first seen on screen. He had already attempted to obtain the three spiritual stones from the tribes of Hyrule in an effort to enter the Sacred Realm. In his search he cursed the Great Deku Tree, infected Jabu Jabu, and blocked the Gorons off from their food source on his rise to power. Ganondorf was indeed a villain early in the story but he was not the great King of Darkness yet.

“Can you see the man with the evil eyes? That is Ganondorf, the leader of the Gerudos. They hail from the desert far to the west. Though he swears allegiance to my father, I am sure he is not sincere. The dark clouds that covered Hyrule in my dream… They must symbolize that man!” 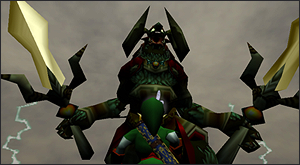 The inspiration behind the Gerudo tribe may have been drawn from many sources. The Hyrule of Ocarina of Time was portrayed as having multiple regions with different climates, each occupied by a people adapted to that region. It boasted the rocklike Goron tribe in the mountains, the aquatic Zoras of the lakes and streams, and the Kokiri fairy children of the forests. This left the desert as the final region in need of a people. With a need to match the story told in A Link to the Past where Ganondorf lead a band of enchanted thieves, these thieves were then made to be the people of the western desert of Hyrule, the Gerudo tribe. As with many characters in gaming, inspiration is sometimes drawn from literary examples; Link’s own origin among the Kokiri in Ocarina of Time bears a strong resemblance toPeter Pan. The concept of the desert bandit has been commonly used in storytelling for many years, and could possibly be inspired by the 1001 Nights tale of Ali Baba and the 40 Thieves. The tale portrays a hero outwitting a guild of desert thieves that use magic to their advantage, which could have inspired the creation of a Gerudo thief king Ganondorf.

Ocarina of Time not only transformed the series to three dimensions, but added a deeper level of story that before was only present in an instruction manual. This allows players to peel away the layers of mystery behind the villain that has been present since the beginning. Fans can now know the story behind the villain, learning and understanding his personality. Because of this, Ganondorf has become more than a monster; he is now a dynamic character with motivations of his own. These innovations have led to further characterization and much more complex portrayals in Wind Waker and Twilight Princess afterward.