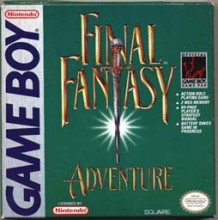 Welcome back to Empty Elegy, where we take a look at various Zelda clones from the ages and see just how close they come to “borrowing” from our favorite franchise, and what ways they either tried to improve upon it or simply tried out some new ideas and used Zelda as a starting point and then forged their own path.

This week is a bit more of the later. While definitely very inspired by Zelda, this particular title was also trying to incorporate a lot of other ideas (and even another genre) so let’s get right into it! Jump inside to read why exactly I feel Final Fantasy Adventure is a Zelda clone! 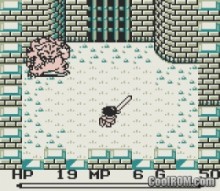 Released in 1991, Final Fantasy Adventure was developed by Square to beat Nintendo to the punch on releasing a Zelda-styled adventure on the new handheld. It was also Square’s first attempt at taking their successful RPG series into the “action-adventure” realm practically invented and occupied by Zelda. But it has next to nothing to do with Final Fantasy. The established enemies from the Final Fantasy series do not appear, but instead brand new enemies who suspiciously behave like those seen in the original Legend of Zelda. One wonders why they felt the need to invent new enemies for the title and not just use the traditional Final Fantasy enemies. For instance, in Final Fantasy Adventure we have the “Seahorse” which behaves exactly like a Zora–it briefly appears from under the water and then shoots a fireball at you, returning under the water before you have a good chance to strike it, only to reappear elsewhere. If they’d wanted to adhere to the Final Fantasy-established bestiary, they could have copied the Zora with a Naga or even a Piranha. This is clearly not a Final Fantasy game, but a Zelda clone. Yet even in Japan, where the game is known as Seiken Densetsu: Fainaru Fantajī Gaiden, the subtitle translates to “Final Fantasy Side Story”. They really wanted people to think they were coming at this from a Final Fantasy angle, even if it was clearly meant to heavily replicate many things from Zelda.

Just how does this game borrow from Zelda? In many, many ways. It features a top-down perspective with angles identical to the original Legend of Zelda. Dungeons are laid out in a similar manner to that first Zelda game as well, divided into many rectangular rooms accessed through doors centered in the North or South or East or West walls. Sometimes you’ll have to use the equivalent of a bomb to break through walls to reveal secret entrances (hacking certain unmarked walls with a Mattock). Other times the doors will be shuttered until you defeat all the enemies, or you’ll need to step on a circular switch to open the door, or you’ll need to unlock the door with a key found elsewhere in the dungeon. The dungeon rooms design is also very original Legend of Zelda-inspired, with blocks and obstacles placed in symmetrical patterns. Also useful within dungeons is a weapon whose use should sound familiar to Zelda veterans: the Flail, whose chain can span the entire screen, can latch onto posts across gaps and pull the player over to safety… Hookshot, anyone?

But the Flail can also be used as a weapon. And here is where we can talk about some of the says Square innovated upon the Zelda formula. Rather than relegating the player to just a sword, they offer up several different weapons, each of which are the only weapons which are effective against certain enemies, but each also serves as an item which can eliminate obstacles. A mattock can take down trees blocking your way (similar to the Zelda “Candle” item). A Sickle which can eliminate bushes.

As if that wasn’t enough: the Spin Attack. In Final Fantasy Adventure you can charge up each of your weapons by holding down the attack button. It will then visually indicate when you have charged up. When you release, a special powerful attack with occur. Eventually you will be able to continue charging beyond that initial special attack by continuing to hold down the attack button even after you’ve charged. It will then allow you to charge up to the second level, which when you release will be an even more powerful special attack. For the sword weapon, this second level charge is none other than the Spin Attack, which behaves exactly like it does in A Link to the Past.

This game does hearken back to Final Fantasy in a few ways: there are status ailments caused by the hero and some monsters which can be cured by items or spells. Ice causes enemies or the hero to turn into a snowman, unable to move or defend themselves. These frozen enemies can be used to activate floor switches. Certain enemies can also transform you into a Moogle. This was only the second game at this point that Moogles had appeared, the first being the then-Japanese-only Final Fantasy III. They appear in this game–along with Chocobos–for the very good reason that they were invented by Koichi Ishii, who served as the creator and director for this game; as a Moogle, the hero cannot attack and must use a curative item to return to normal. There are also a variety of status ailments that can happen to the player that are similar to those seen in Final Fantasy: the hero can be blinded, they can be stunned, they can be poisoned, and even petrified. And there are as many curative items as there are status ailments; where Zelda simply had two different flavors of Potion, this game offers up several levels of HP reviving potions as well as a variety of other items which cure each ailment.

Also different from Zelda is that this game features a party system of sorts: more often than not the main hero will have a secondary character trailing behind him. Each secondary character has a different skill they bring to the table: one of the characters can heal the hero’s health, another acts as a walking item shop, while yet another will refill your magic points, and still another will change the background music… which is… interesting… 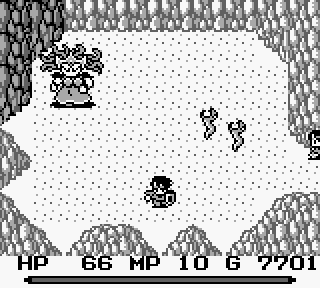 Another difference from The Legend of Zelda is that this game features a much more robust story. Each of the secondary characters you come across has a surprisingly interesting backstory for the era, one of the villains has a bit of a tragic history and end. Not all of your friends make through the adventure alive. Quite different from Zelda in that regard. The weapons and armor are also much more up-gradable than the usual two additional times in Zelda–which you purchase in shops in Final Fantasy Adventure as in traditional RPGs. All in all, it feels much more like a hybrid of Zelda and Final Fantasy than just a straight Zelda clone. 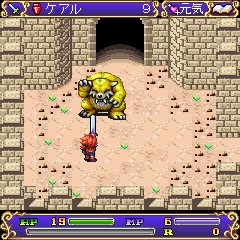 Final Fantasy Adventure was so popular that it spawned an entire series. The sequel Seiken Densetsu 2 (Secret of Mana in the Western world) was released just two years later and carried the series even further away from both Zelda and Final Fantasy, establishing itself as its own series. Final Fantasy Adventure has received not one but two remakes. First, as a complete from-the-ground-up remake featuring dungeons with completely new layouts, much more detailed dialog, entirely new graphics, and such. It’s so different, in fact, that it bears a different name: Sword of Mana for the Game Boy Advance. The only similarities are the places names and basic plot. The gameplay and art direction are much more in line with later games in the Mana series like Secret of Mana and Legend of Mana. Just a few years later Final Fantasy Adventure received a much more faithful remake for mobile phones (Japan only, sorry) that was basically just colorized, 16-bit versions of the original black and white 8-bit graphics.

Have you played Final Fantasy Adventure or any of the other Mana games? Let us know what you think of them in the comments below!