This particular game is one which I’ve been planning on covering in this features series for quite some time–really, since the beginning I started writing these. However, I wanted to make sure I’d played most of the game–if not actually finishing it–before writing about it. The reason for this is because there’s a lot of negativity about this particular “Zelda clone”, and it seems like that negativity comes from the same people who then later say “well, I haven’t actually played it”… I wanted to make sure I wasn’t one of those people. And the truth is, I loved the game. I haven’t yet finished it, but I have played through about half of it, and while I won’t be able to finish it anytime soon (I’ve been brushing up on various Zelda titles in preparation for the Zelda Dungeon Marathon) I will be finishing it as soon as I can, because it is quite frankly one of the best games I’ve ever played. But that’s likely just the nostalgia talking.

Jump inside to read more! 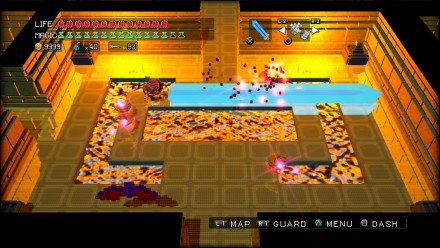 The original Legend of Zelda was my first Zelda game. And as clunky and simple as the gameplay and design are in retrospect, it still holds a very special place in my heart. So when I saw the first trailer and screenshots for 3D Dot Game Heroes, I was very excited that I would eventually be able to play something which–for all intents and purposes–is basically a sequel to that first game. 3D Dot Game Heroes looked like a love letter to the original game, and even relished in its 8-bit limitations by intentionally trying to look and play like an 8-bit Zelda game suddenly plopped into a 3D world. The overworld has that same oddly symmetrical thing going on where all of the bushes and rocks are lined up in rows and columns. It even does the “walk to the edge of the screen, and then the new screen will scroll in” thing that the original Zelda game did. The overworld music is also awfully familiar-sounding… being as close to Zelda’s without infringing on copyright. And, heck, while life is replenished with red apples instead of red hearts, during an interview with the developers before the game was released they kept accidentally calling them “hearts” instead of “apples”. This game is meant to pay homage to the original Legend of Zelda in nearly every detail.

Unfortunately, this has gained the game the title of “clone” which is often something people say with a certain level of disdain. They see all of these similarities and become frustrated with 3D Dot Game Heroes “ripping off” the Legend of Zelda. Most people dismiss this game out of hand because they feel it is violating Zelda in some way. Well, I have to say I disagree wholeheartedly. The way I view it is: Nintendo is never again going to create a game that is as adorably limited and retro as that first Zelda title, so I’m perfectly fine with someone else doing it if it means I get a good, quality game in that old style. The fact that visuals are amazingly updated is just icing on the cake for me. This is an homage to Zelda, not a ripoff. This is a game where the developers were clearly in love with the Legend of Zelda and wanted to create something similar to that beloved game. 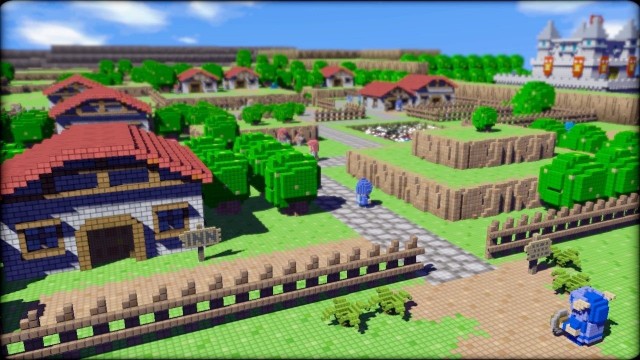 That being said, there are quite a few differences. Instead of 2D sprites, the world and people and things are built up with voxels (3D pixels) giving the original Zelda-type of game a very fresh appearance. There are fancy, modern animations and textures and effects that really make it feel almost as if you’re watching LEGO bricks come to life. Also there are several thriving towns, which is considerably different from the first Zelda game in which there were no towns at all and the people were just scattered across the landscape dwelling in caves. In these towns are all the usual sorts of shops, but also villagers who task you with various quests like you would find in a modern game in other franchises. The biggest difference of all is the fact that you can either choose from over ten pre-created characters to use, or you can even create your own from scratch. You could even choose to create a 3D translation of a certain green-clad elfin boy and name him “Link” if you wanted. 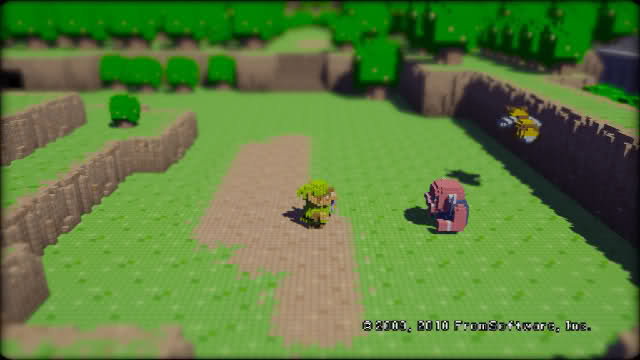 The story is nearly as simple as that in the original Legend of Zelda’s, but it shares some basic similarities to that in A Link to the Past. There was an evil king beast who coveted the power of the six sages, so he imprisoned them and stole their six orbs. But a youth with a sacred sword appeared and rescued the saves and they combined their power into the “Light Orb” which trapped the evil king beast inside a Dark Orb. Eventually the evil king beast breaks free and it’s up to you to find those six orbs and defeat the evil king beast. Basically. There’s also this clever bit about the land originally being 2D sprites but the king having it upgraded to 3D to bring back tourism. The point is: this is as close as you can come to Zelda’s plot without actually copying it, I think. 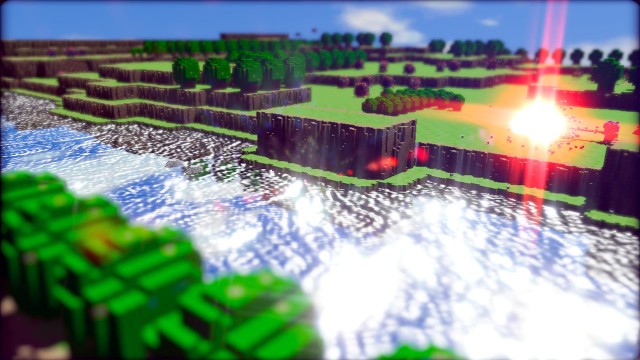 So why do I like 3D Dot Game Heroes so much? Should I, as a Zelda fan, be angry with its developers for so blatantly copying Zelda? Nah. Knowing that Nintendo will never return to the simplicity of 8-bit goodness, I’m just glad that someone out there is basically giving me the opportunity to play what is essentially the original Legend of Zelda but with a new overworld and new dungeons and all kinds of new fun features along with a really breathtaking and unique visual style. Unfortunately this game is exclusive to the PS3, so if you’re interested in playing too, hopefully you have that console as well. I certainly didn’t when I bought the game! If you have played it, let me know what you think of the game in the comments below!

Author: BastianThe editor-in-chief for Zelda Dungeon, Bastian spends most of his time at the site recruiting, hiring, training, and editing nearly all of the writers you read here. He regrets that he has so little time to do much writing himself, but thoroughly enjoys it when he can. You can sometimes catch Bastian on Zelda Dungeon’s YouTube channel reporting breaking Zelda news, or reporting Nintendo news nearly daily on BastianTime, his own YouTube channel.
Tweet