Empowerment in Zelda: The Evolution of the Gerudo in Breath of the Wild 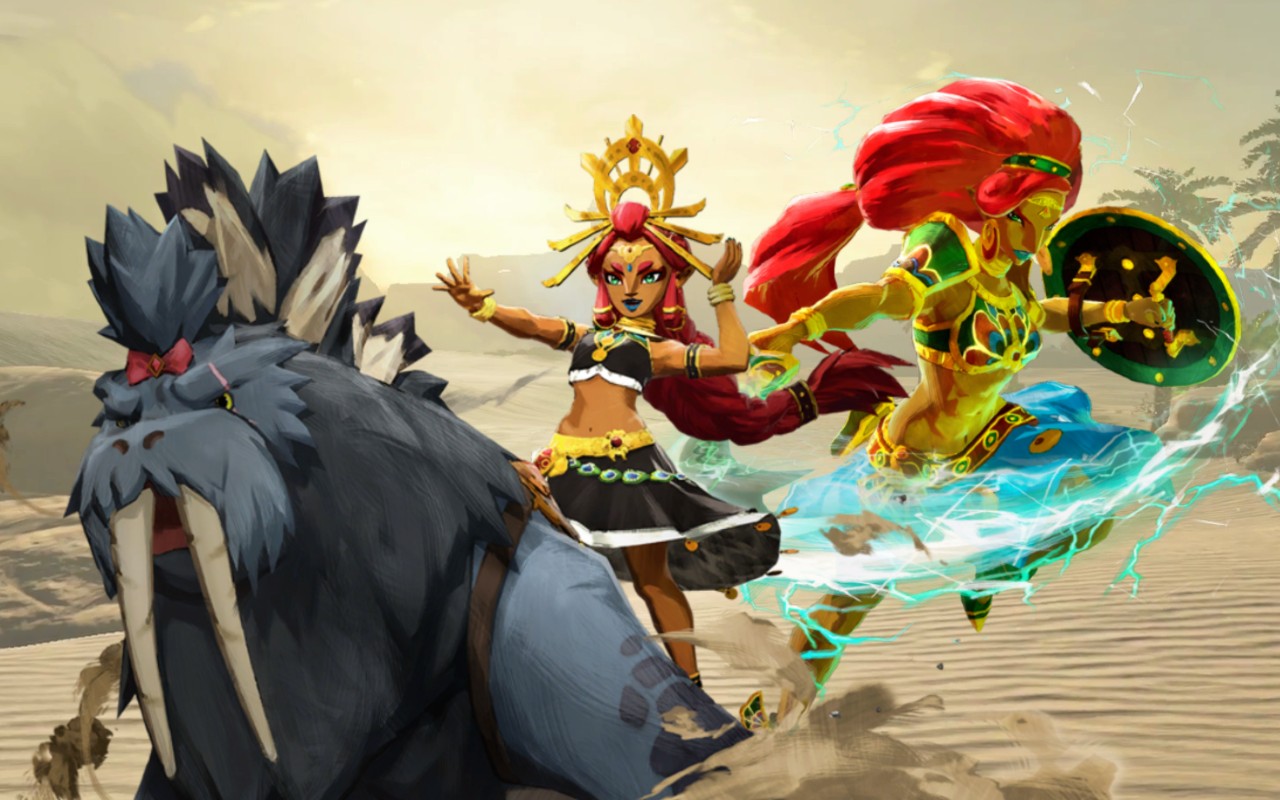 If there’s one thing I’ve always admired about the Zelda series, it’s the inclusion of diversified, creative races and strong and well-written female characters. As a young girl playing Ocarina of Time for the first time, I remember being inspired by Princess Zelda’s resolve to stop Ganondorf using her intelligence and Link’s aid. Even after their plan went awry, she was still committed to protecting her people and donned the alter ego of Sheik for seven years, supporting Link’s journey from the shadows. Other side characters like Saria and Malon made an impression with their charming personalities and important roles in Link’s life. Later games like Twilight Princess and its characterization of Midna continued the trend of featuring female characters in prominent roles with arguably stronger writing and more nuanced development than that of our protagonist. And then there’s the Gerudo. A race of predominantly women, the Gerudo are strong, powerful warriors…but for a long time, that’s all they were.

The Portrayal of the Gerudo in Early Zelda Games

The Gerudo race was first introduced in Ocarina of Time as desert-dwellers who had a reputation for being bandits and thieves. Unlike the Zora or Gorons, the Gerudo stood out as formidable fighters, most expressly apparent in Gerudo’s Fortress. An entire break-out sequence revolves around the warriors and escaping the fortress isn’t an easy task, with several scripted fights and a multitude of guards making the rounds. For the most part, they are viewed as adversaries to Link (and by extension, the player). The only notable characters from the region in Ocarina of Time are Nabooru, Twinrova, and Ganondorf, and the latter two are villains. Nabooru is ultimately awakened as the Sage of Spirit and becomes an ally, but her earliest encounter with Young Link involves recruiting him to steal the Iron Gauntlets from the Sand Temple. Sure, it’s for a good cause but at the end of the day, it comes back to the thievery that the Gerudo are so defined by. The rest of the Gerudo’s livelihood isn’t really explored in any further depth, either. 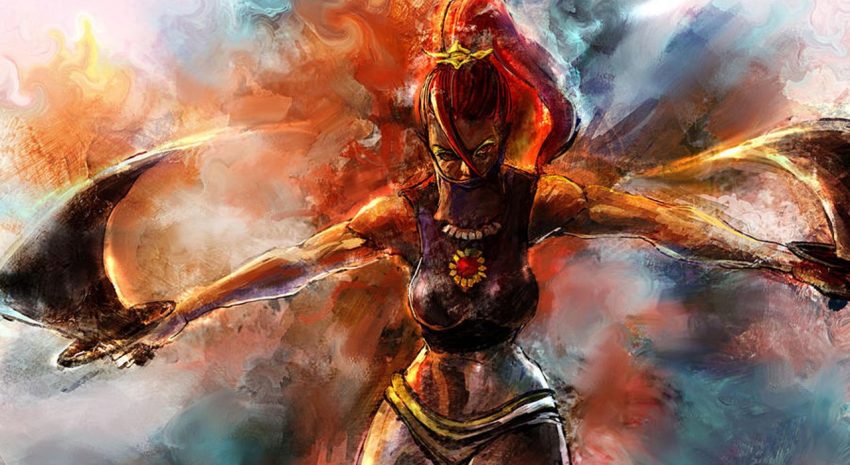 So maybe Ocarina of Time‘s portrayal wasn’t the most positive, but what about Majora’s Mask? Unfortunately, it’s not much better. As much as I love the lore and story of Majora’s Mask, the Gerudo are presented as seafaring pirates led by Aveil (the only named pirate) that abduct Zora eggs for riches. You can probably sense a bit of a trend here. With very few exceptions, in these early games, the Gerudo were not portrayed as people. Not really. They lived as bandits, thieves, and pirates, none of which have a particularly positive connotation. The Gerudo were a generalized group of people without any distinguishing features, personalities, or cultures. Most of the time, you can’t even interact with them.

For all intents and purposes, the Gerudo are presented as adversaries and nothing more. Compare this to the Zora or Gorons, with notable cultures, ruling systems, and characters that you can interact with (even if some of them are pretty one-note and simplistic); that’s still better than what the Gerudo had. The only other game where they weren’t openly hostile was Four Swords Adventures, where they had a nomadic lifestyle and denounced Ganondorf. It was a good first step, but it didn’t really do enough to showcase them as diversified people with a rich culture. That is, until Breath of the Wild.

Along Came Breath of the Wild

From the open-world exploration to the weapon durability system and story you could tackle at your own pace, Breath of the Wild was a gamechanger for the Zelda series in many ways. While the numerous collectible items and gorgeous cell-shaded graphics were welcome additions, by far I felt the greatest offering of Breath of the Wild was its world-building and thoughtful portrayal of every race in Hyrule. The Zora, Rito, Gorons, Hylians, Koroks, and Gerudo all have prominent communities and cultures, and the race to benefit the most from this dedication to the world-building and deeper characterization were the Gerudo.

The Gerudo Desert was the second major region I visited after Zora’s Domain when I first played Breath of the Wild, and once I snuck in (crossdressed and all), I was blown away by the culture and portrayal of the Gerudo. They weren’t thieves or bandits stealing from others. Although the Gerudo still follow their tradition of women-only judiciously, they aren’t completely isolated, either. Some Gerudo may choose to leave the town, whether to find love or trade their goods. Befitting of their competitive spirit, the Gerudo participate in Sand-Seal Racing, showing they have other worthwhile hobbies outside of combat. There’s also meaningful history and culture surrounding the Gerudo, from the Seven Heroine Statues to their multi-generational open defiance of Ganondorf. At the center of Gerudo Town is a lively and bustling marketplace, and they have their own language! Words like “vai” and “voe” to indicate women and men, “sav’aaq” as a morning greeting, and “vasaaq” to welcome visitors. I was amazed by these seemingly small details and how much depth they added to the Gerudo and their livelihood.

Not only are these cultural and livelihood milestones important, but so is the physical portrayal. While all of the races in Breath of the Wild get a design overhaul, the Gerudo are perhaps the most significant. Historically, Gerudo character models were recycled, and while I understand there were technical limitations that influenced this in early Zelda games, it was a relief to see unique character designs for them in Breath of the Wild. Gerudo women of all different shapes, ages, and skin tones populate the town, and you can interact with each one. They all have something unique to say. 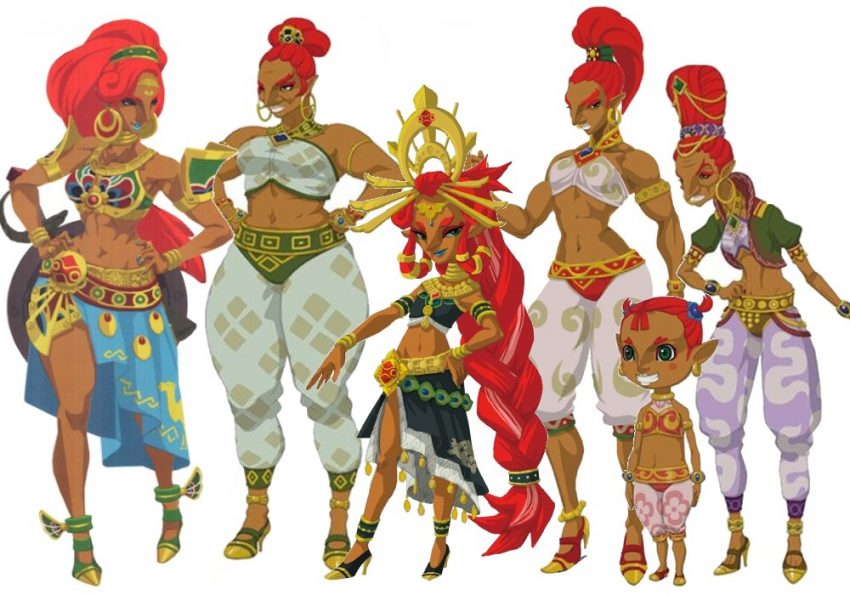 Perhaps the greatest contrast between Breath of the Wild‘s Gerudo and past games lies in the characterization of key characters in the story. Both Urbosa and Riju are fantastic, well-rounded characters. On the surface, Urbosa is portrayed as a strong Gerudo warrior with powerful lightning abilities and fighting prowess. But that doesn’t define her. Flashbacks reveal a softer, maternal side of Urbosa through her history with Princess Zelda and her friendship with the queen. Riju is a caring leader who always attends to the needs of her people, but also has a more silly side to her personality as well. Contrast that with Nabooru, who coerced a child to help her steal Iron Gauntlets for her own means, and Aveil, who stole Zora eggs for riches, leaving Lulu distraught and Mikau dying on the shore. It’s like night and day.

Why the Gerudo’s Empowerment Matters

The evolution of the Gerudo is stark and meaningful because they now feel like a cohesive group of people, first and foremost. Because of that, they are empowered and fully realized. Gone are the days of overly simplistic portrayals as villainous thieves or pirates. Through a more positive and diversified portrayal of their people and culture, they gain humanity and life. As video games evolve, so too should the presentation. Aspects of the Zelda series like the story and characters have evolved significantly, and I’m glad to see that the Gerudo received meaningful development in Breath of the Wild. It’s reassuring to see women of color portrayed as multifaceted, embracing their uniqueness, and speaking proudly and freely with their voice as opposed to being stereotypically “strong” or “exotic” props. It reflects a positive shift in our culture, and I’m excited for this positive trend to continue.

Michaela El-Ters is an Associate Editor with Zelda Dungeon. When she’s not replaying Breath of the Wild, she enjoys watching anime and writing character analyses on the side. Check out her blog.

“Empowerment in Zelda” is an ongoing series in which we highlight the series’ approach to inclusivity, spotlight relevant characters, and speak with Zelda fans from marginalized communities. It is our desire for the installments of this series to be received with open minds, and civil discussions between readers are encouraged.