Dungeon Week: The Intricate Mechanics of the Stone Tower Temple 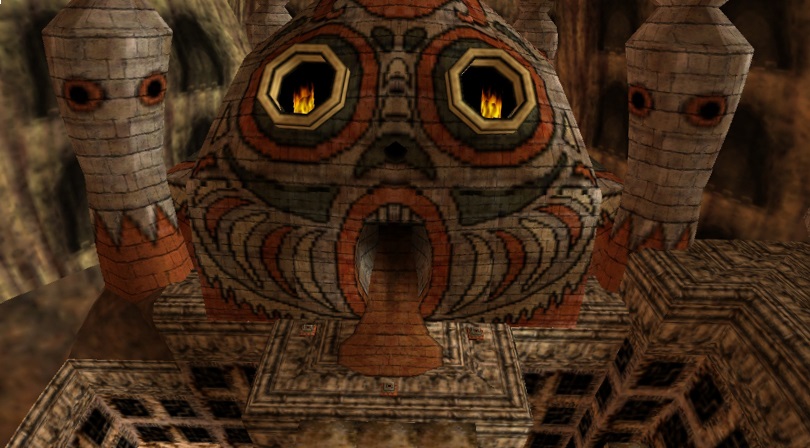 The Stone Tower Temple is one the most unique dungeons within Majora’s Mask, and one of the most unique within the Zelda series in general. This is not just due to the considerable effort and time required to get into the tower, but due to the further challenges presented by the upward climb toward the temple and, of course, the dungeon itself. All aspects of entering and completing Stone Tower ensure that the player is prepared and worthy for the final conflicts of the game.

Within this Dungeon Week piece, I will try to take an analytical look at the dungeon while also allowing me to present my personal thoughts about this dungeon, focusing on both the extensive lead-up to Stone Tower and the dungeon itself. To even get into the Stone Tower Temple, one must first acquire the Hookshot and Ice Arrows, meaning that this dungeon must be done last, as these items can only be obtained by completing (or at least visiting) the previous three dungeons. Though I’m sure there are methods to get there early, everything prior to Stone Tower can be looked at as nothing more than preparation for what is about to come.

Once the player has entered Ikana Canyon, it could even take Link multiple three-day cycles just to acquire the Song of Storms and  make his or her way through the area Beneath the Well.

Finding the Song of Storms isn’t necessarily difficult, but doing so requires a degree of trial and error. The player must visit the Graveyard on the correct day and then must triumph in the battle that awaits. Naturally, if the player takes too long or misses the first night in the graveyard, then they must reset the cycle and proceed back towards the graveyard for another attempt. Beneath the Well can be just as difficult and time-consuming, especially if the player only has a small number of bottles or isn’t fully prepared for what waits in the depths. Even though the items the player needs to take with them are relatively easy to find, there are some that might present a challenge.

An under-prepared player can miss out on any of these items, especially the Big Poe. And just like the trials found at the Graveyard, the player may need multiple three-day cycles to overcome the Well. After completing Ikana Castle — itself another trial the player must face — Link is allowed to finally enter the Stone Tower. Notice the lack of a temple in the image beside us? Yup, the player must first take part in yet another puzzle/trial to gain access to the temple itself.

Now the various puzzles involved in the climb toward the temple aren’t entirely difficult; they simply present a little bit of trial and error. But I find this section significant because it acts as another learning experience for the player. Like the challenges found throughout Ikana, climbing the tower symbolically proves that the player is prepared for what is to come. And speaking from a game design point of view, the tower is a way to teach the player how The Elegy of Emptiness works, and it does so excellently. What could be considered a time-consuming portion of gameplay added to further pad a short game is instead presented as an excellent tutorial for the temple itself. The final temple of the game is finally here and the player is asked to use everything they’ve learned to progress through the temple’s various rooms, one small key at a time. And after all the strange trials the player had to go through before entering the temple, this might actually be a refreshing change for the player, a return to normality. Even though the temple is still a challenge, there is nothing here at first that would make the player feel out of their comfort zone.

Except for maybe one thing.

As the player approaches the halfway mark of the dungeon, he or she will find that there has been no sign of where the boss room is or even how to get to it. And therefore, the temple, even when making the player feel like normality has returned, is still using certain tricks to pull the player’s leg. Players’ expectations are being tested, just like their preparedness and skills were tested in the lead-up to the dungeon.

Even the temple’s music can affect the player’s mindset. Working like the classic Hyrule Castle theme, the temple’s music gives the place a distinct air about it, maybe as a place where a King would have stayed. However, it also adds a sense of unease on top of that. Allowing itself to further keep the player on edge, it offers a tune that is easy to listen to while also hinting that not everything is okay.

Now, some eagle-eyed players might spot clues in the temple’s first room and make realizations about the dungeon’s gimmick, but nothing is fully revealed until halfway through. Of course, I’m talking about turning the dungeon upside down when the player has the means to do so. So, confession time: the first time I did this puzzle I genuinely thought I’d done something wrong. Not fully understanding what would happen when I shot the Light Arrow at the jewel near the temple’s entrance, I was surprised to see Link sent off into the sky. Doing so of course turns EVERYTHING upside down as intended, but the first time this happened to me, my immediate thought was that I’d missed part of the puzzle and I’d literally just killed Link by sending him into the void.

Naturally, everything turns out fine and Link is (somehow) placed on the opposite end of the platform he was standing on. And now the Stone Tower Temple, which previously wasn’t even that large or difficult, is now expanded twice-over, becoming what I think is one of the largest, most complex dungeons within the Zelda series.

Even if the player could grasp the layout beforehand, everything has now changed, forcing the player to relearn what the dungeon is. And this is what the entire game has led up to, a challenge that continually forces players to overwrite their past experiences. Since time is of the essence, and the Stone Tower Temple requires more time than any dungeon before to finish it, the player must be efficient and quick, while also remaining calm and thoughtful.

Before we discuss the boss of Stone Tower, let’s first talk about something else this dungeon does differently than others in the series: it gives the player two main items instead of one. This is yet another great subversion of the player’s expectations. And the temple’s second item, the Giant’s Mask, further subverts what’s expected. The player opens the chest to find a new mask, only to find that it can’t be equipped. At least, not until they walk into the final chamber. The battle with Twinmold is the player’s final test in Stone Tower. Now, I consider the fight very easy in the N64 version, especially if the player knows it’s coming and decides to purchase some Chateau Romani. But even if one isn’t completely prepared, the boss isn’t especially difficult providing one has a full magic meter.

However, in the 3DS version, this fight is quite different; it could very well be considered a different boss fight altogether. Not only does the player have to take one part of Twinmold down as Child Link with nothing more than arrows — giving the fight an epic feel — but the second part needs to be taken down in Giant form with completely different mechanics than those seen in the N64 version.

But while difficulty may differ among each version, the true challenge of this battle comes down to the in-game clock. With the temple potentially taking so much time to complete, the defeat of the boss may happen in the final moments of the third day. Personally, I nearly ran out of time during this fight in the 3DS version particularly, due to the sheer fact that the Giant controls are thrust upon the player and no indication is given to the swinging mechanic. (Maybe a semi-transparent button would have helped here giving the player an idea as to what needs to be done for this fight.) Regardless, the dungeon’s final test may just come down to the final seconds on the clock.

The Stone Tower Temple leaves a lasting impression on the player, testing them on everything they’ve been shown beforehand and challenging them with new ways to play.

This Temple holds a special place in my heart and is one of the main reasons why Majora’s Mask will always be a timeless classic and the number one Zelda game for me. Everything from the layout of the dungeon to the music within proves that this temple is one-of-a-kind and hasn’t yet found a worthy successor. To me, no other dungeon has presented better mechanics than this one.

Peter Lowes is an Editor at Zelda Informer. For more thoughts of his, follow him on Twitter.