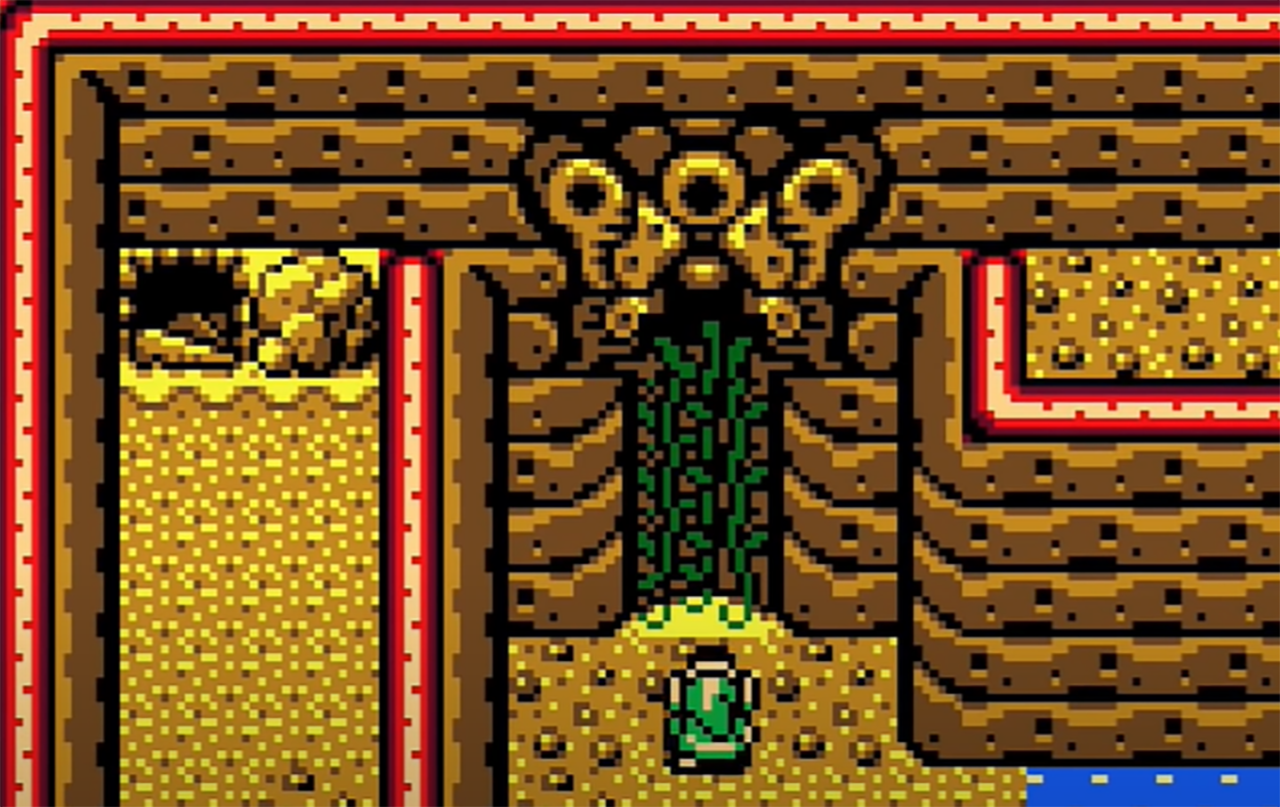 During this Dungeon Week, my first as a staff writer for Zelda Dungeon, I find myself in the middle of playing through The Legend of Zelda: Oracle of Seasons. As noted in Zelda Dungeon’s 2022 Best Zelda Ever feature, not only does Seasons seem doomed to live in the shadow of its more generally-loved sister Oracle of Ages by way of constant comparison, it’s also chronically underplayed. With several of the “lesser” titles not yet under my belt, I’m attempting to rectify this oversight — before Tears of the Kingdom comes along to distract us all for many months to come.

At the time of writing, I’ve just finished the third Seasons dungeon, Poison Moth’s Lair. It probably won’t end up being the dungeon I find the absolutely best crafted or most interesting of the game. It is, however, the dungeon I’ve spent the most time exploring so far, and the one that has captured my attention to the point of a kind of meditative stupor. With Seasons containing nine dungeons, I count this as a meaningful 1/3 waypoint that asks you:

Are you having a good time? Are you going to continue this journey? 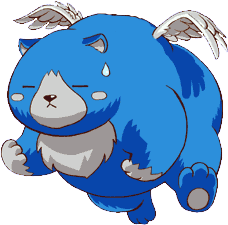 I certainly haven’t been consuming Seasons with the kind of rapacity that most major Zelda titles have elicited from me. As my Zelda Dungeon colleagues have pointed out previously, Seasons is plagued with a few frustrating design decisions, such as having to bounce back and forth between Holodrum and Subrosia in order to make progress, which can make the player feel like they can never focus on any one aspect of the game long enough to really enjoy it. I’ve also been playing the game on an original Game Boy Advance without an illuminated screen, so I generally only play smaller chunks at a time when I can sit in one place for a while with my favorite lamp on behind me. I could elect not to do this to myself, but I can’t help but be charmed every time I boot up the game on the pink Game Boy Advance I’m lucky enough to still have and see the Seasons intro play out on the little screen.

With my playthrough of Seasons taking place over the course of this protracted ritual, I find myself fixated on Mothula’s domain as I consider what the experience so far has been like. The leadup to the dungeon in Spool Swamp saw me form a bond with my new default animal companion, the adorable blue flying bear Moosh, since I had purchased the Strange Flute from the Horon Village Shop. (In both Oracle games, Link can get one of three animal companions: Moosh, Dimitri the Dodongo, or Ricky the kangaroo, depending on which Strange Flute the player happens to have acquired). With Moosh’s help, I went on towards Poison Moth’s Lair with a renewed sense of overworld freedom, having only recently escaped the confines of the game’s second dungeon, Snake’s Remains. I also found myself really enjoying the environment of Spool Swamp, with its default season being my favorite one, autumn. 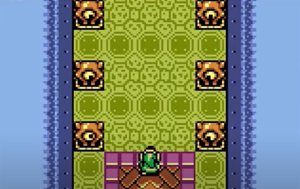 Link enters the moth’s maw. Something about the opening tones of the dungeon’s theme feels particularly heavy, leaving behind what sounded to me more like mystery and intrigue in the previous dungeon’s soundtrack and here embracing an even more sinister darkness. I walked through this entrance — and faced the monstrous eyes watching me along both sides of that beginning hallway — many times as I got used to the first few rooms of the dungeon. The culprits here were mostly the wallmasters who would appear seemingly right beneath me a few rooms in, but new encounters with mini-moldorms, anti-fairies, and arm-mimics which copy Link’s every move in the opposite direction certainly kept me on my toes as well.

The dungeon contains a great deal of blocks to move, sometimes necessitating experimentation to figure out the perfect block to push on to proceed. Soon enough, though, you can grab the Roc’s Feather, which changes the entire game. Being able to hop over gaps not only opens up new areas of the dungeon, but now Link can also access new areas in Holodrum and Subrosia that he couldn’t before.

While before I wasn’t sure why I was having to backtrack between rooms so much, now with the Roc’s Feather equipped, I was elated to be able to go back to old areas of the dungeon and finally access what before had been impossible. Moving platforms that stop a space away from the nearest ledge? No longer a problem. Stymied by a button that makes the floor ahead of you disappear? Now it’s so easy to skip right over. The new item isn’t necessarily a fix-all; the dungeon’s mini-bosses, the Omuai, don’t require you to use the Roc’s Feather at all (instead, you need the Power Bracelet to lift them out of their water pools). It is, however, still very satisfying to be able to jump across moving platforms in the underground portions of the dungeon as you slash at enemies in the air. 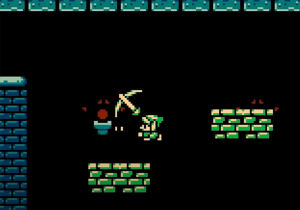 It took me a couple of play sessions to push through defeating the dungeon’s boss, Mothula. It was easy to fall down into the pits along either side of two central platforms in the boss room; and while getting back up is fairly simple thanks to a handy trampoline in the room below, falling down does unfortunately reset Mothula’s health and start the fight over. Here using the Roc’s Feather is crucial as you jump to the platforms at the center of the room while dodging smaller moths and fireballs. At the end of the day though, it was kind of just another boss, rewarding to finally defeat, but ultimately easy to forget. After picking up his due Heart Container, Link emerges from Mothula’s abode and gains the Bright Sun, the third Essence of Nature to collect. It’s only fitting that the Essence that the Poison Moth’s Lair held was such an irresistible bright light — “like a moth to a flame,” and all that.

So… This Was Just Another Dungeon? 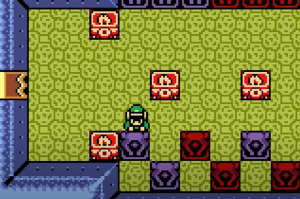 Poison Moth’s Lair is just another dungeon, along a line from point A to point B, beginning of game to end of game, number three out of nine, if we want to frame it like that. I’d probably have already pretty much forgotten about it if I was sprinting through Oracle of Seasons like I have other Zelda titles, and maybe dungeons from later on in the game will be capturing my attention in a more lasting way. But Poison Moth’s Lair has been one of those dungeons that, for me, makes me stop and personally assess what dungeons actually do within the Zelda format.

Yes, dungeons provide us with new items and allow us to encounter unfamiliar, stronger enemies for the first time in environments that are often satisfyingly learnable through repetition. Dungeons can serve as mile markers along a game’s progression structure, letting us see how far we’ve come and how much further we have still to go. Some people can see each successive dungeon as a new challenge that puts them one more step within reach of completing the journey and beating the game as fast as possible, the ultimate goal. I sometimes find that I will intentionally put off beating a game, though, because I don’t really want it to be over yet. When each dungeon is allowed to breathe in this way, you start to see some of the other things these mile markers can do for the whole experience.

Dungeons allow their creators to try out new ideas, puzzle set-ups, and enemy designs that might not work as well in the game at-large. Dungeons are also places where a theme can rule without bleeding into the overworld or the surrounding story. I appreciate the fact that in a game about gaining control over the seasons with a magic rod, you can also tackle a den full of snakes or make your way through a lair ruled by the insects of the night — and these areas all have their own space to live in fully without needing to cross over or justify their existence. 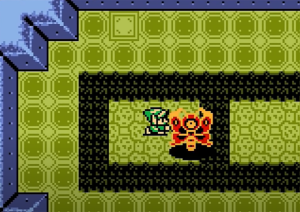 I’ll also say this: even when a dungeon can seem so-so or run-of-the-mill, even if it doesn’t make most people’s Top 5, 10, or even 20 list, some extraordinary things can still happen while you’re there. Sitting down in the quiet of the evenings during my playthrough of Poison Moth’s Lair, I felt some of my unborn child’s first kicks, and often felt them respond whenever I’d turn on the game and hear Seasons‘ intro play aloud. It’s easy to imagine, even if it’s not accurate, that over the course of my playing the game, the sound of the story booting up had become familiar to us both. This is an element that will always stick in my mind about playing through the game, even if it’s a title I only ever end up playing once. In a dungeon accessed from the waters of Spool Swamp, it feels as if we have had our first Zelda experience together. Was it an “iconic” Zelda experience, one that’s relatable to everyone? Not necessarily. But in Poison Moth’s Lair, creeping around corners, evading Wallmasters, and jumping over platforms, I felt I was sharing my gaming experience in a novel way.

Some of the greatest value a dungeon can offer is not just what’s built into it within the game itself. These waypoints can also help us appreciate the things we’re doing in life at the same time as we make our way through said dungeon, from moving to a new city, to going on summer vacation after finishing a tough semester at school, to working through life’s more difficult emotional struggles. If I’d decided to write about one of my just plain favorite dungeons for this week, I might have picked the Final Divine Beast from Breath of the Wild‘s DLC, Ganon’s Castle from Ocarina of Time, or the Ancient Cistern from Skyward Sword. I think any of these would have made for a meaningful reflection. But, in this current season of life, Poison Moth’s Lair just hits me kind of funny, while simultaneously helping me capture some new feelings and experiences. In that way, it’s one of my favorites, too.