Here we are wrapping up another week of the Official Dungeon Gaming Enterprises Community Competitions and we have a few winning entries to show off. Recently a couple of the competitions had to extend the timeframe from one week to two weeks in case people needed a little bit more time to complete their entries. This week we have all four winners to announce so let’s see who won.

Jump inside to see the winning. entries

First up is the Graphics Competition hosted by Vanessa28. This week’s theme was Legend of Korra with mandym287 gaining the most votes.

Next up is the Writing Competition hosted by GaroXicon. The theme this time was Farewell with Heroine of Time winning once again.

The girl slammed the empty bottle on the wooden table, licking her lips and giggling. “More!”

“How are you feeling?” Cremia inquired, ignoring the demand.

“Perhaps… tomorrow,” she muttered, feeling utterly horrified that it pleased her that Romani was feeling the effects of the drink. Her sister had just downed four bottles of Chateau Romani; she would be out of sorts until tomorrow morning, which was exactly what Cremia desperately wanted. She stood, forcing a strained, perfunctory smile. “L-Let’s go to bed now, okay? It’s late, and my little adult still needs her sleep. You’re sleeping with me tonight, remember?”

“‘M not tired,” her sister grumbled, and Cremia dismally noted that her words were slightly slurred. “I wan’ more milk…”

She sighed, having never felt so miserable in her life. She picked up and carried her inebriated sister to her bedroom, laying her down and covering her.

Cremia lay down next to her, leaning over and kissing her forehead. “Goodnight, Romani. Know that I love you more than anything. Father would be very proud of you. I’m the luckiest sister in the world.”

When Cremia received no response, she realized that the girl was already asleep. That was her own fault, she supposed, but it didn’t make the revelation that she could not impart her final words any less painful.

Cremia rolled on her back and stared up at the ceiling, unable to help but imagine the horrifying image of an abnormally huge moon with its taunting, demonic grin. She shuddered. She no longer had any illusions of the moon not landing now that she had perceived its unforgivingly slow descent, and she had little doubt that the impact would reach Romani Ranch. If only she had believed… if only they had fled…

At least Romani would be blissfully dead to the world…

Hours later, she awoke to a rumbling that shook the room. She was flustered momentarily before realizing that, against all odds, she had fallen asleep during this nightmare. Immediately, she determined that the quaking meant the moon was getting close, and her panic was renewed.

“S-Sis?” Cremia glanced at Romani, who gazed at her wearily. “M-My head hurts…”

“Shh. It’s okay, Romani. Go back to sleep,” Cremia said, her voice quivering. She heard the toll of the Clock Tower in the distance, and she glanced out the window to confirm that it was nearly dawn. What time would the moon fall? What time was it now? Another bell rang, accompanied by a tremor that threw items off of shelves, and she knew that time was running out.

Cremia embraced her sister, tears streaming. The whole moment seemed so surreal; she felt numb. “Goodbye, Romani. I love you.” Another toll. “I’m so sorry…”

“Bye sis…” Romani sighed, snuggling up to her sister.

Cremia sobbed and closed her eyes.

Then we have the latest Random Drawing Competition hosted by Random Person. The theme for this was the Zelda series with a sub theme of Worst Item Ever. Majora’s Cat won this week with his pic depicting Link having trouble with the ball and chain from Twilight Princess. 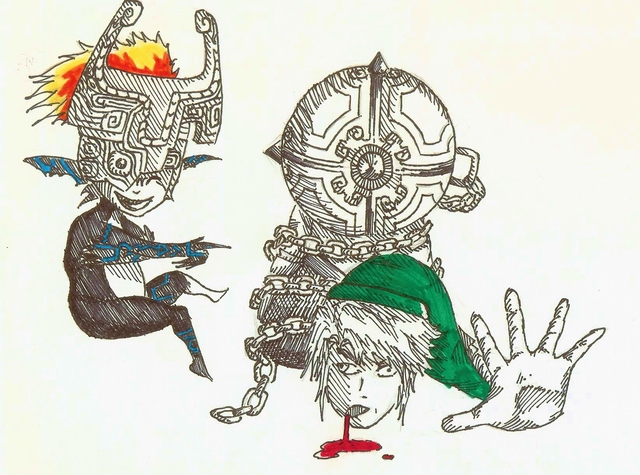 And lastly we have our Music Competition hosted by Darknut_Hunter. The current theme this week was Isolation with Pl511 winning once again with his song titled Half Moon Bay.

You can check out these and all the other great entries that were submitted for every contest on our forums. And if you wish to submit something for a chance to be seen here all you have to do is register on the forums and send them in. Just submit your work for each competition to the competition hosts before the deadline and you will have a cance to be featured. All pieces are voted on by members of the forum in a public poll so be sure to vote while you are there. And we will be back next week with the next round of winners.