Developers Reveal Logic Behind Bringing Breath of The Wild Characters to Hyrule Warriors: Age of Calamity

Posted on November 21 2020 by Andrew Millard 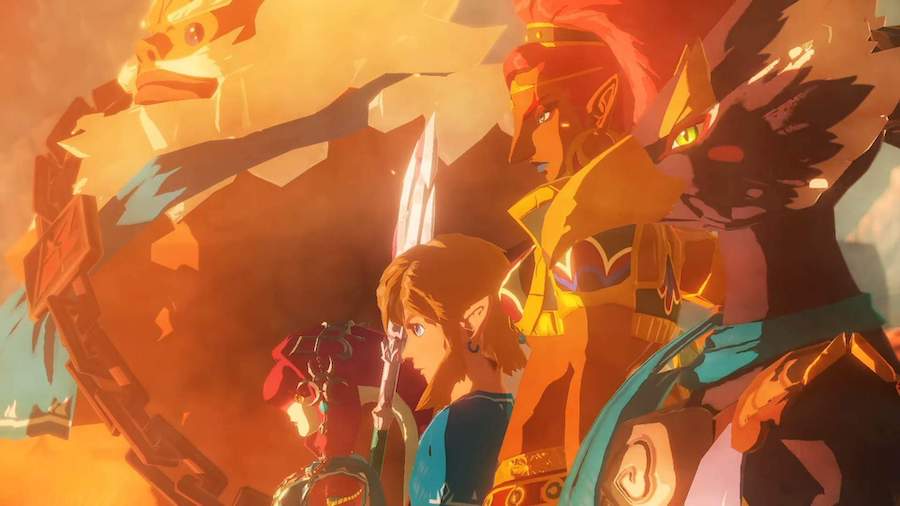 When Hyrule Warriors: Age of Calamity first appeared on the horizon, a common question would crop up among fans: How will the Champions play? For a game whose story hinged on the bravery, but ultimate loss, of such a vibrant supporting cast, Breath of the Wild held precious little characterization to work with.

As part of an interview with Japanese publication 4Gamer, Eiji Aonuma, and Koei Tecmo leads Ryota Matsuhita and Yosuke Hayashi pulled back the curtain on how Age of Calamity was merged with Breath of The wild‘s distinct style.

But how then to bring captivating minor characters like Zelda and the Champions to the front? As the trio explained, it had a lot to do with taking cues from Breath of the Wild as far and as logically as they could:

“How did you approach the story created for this title?”

Hayashi: The overall scenario concepts were determined through debate between ourselves and the Zelda team. We considered the story to be essential to this work, so it was essential to hammer out the details of the story together before the gameplay was finished.

“What were the reasons for selecting the current members as playable characters?”

Matsushita: Encountering the four Champions is vital in the story leading up to the battle to counter the Calamity, and Link, Zelda, and Impa were chosen as the members who could firmly draw the axis of the story up to that point. Because Link doesn’t speak, of course.

In terms of balancing action, we open with the orthodox swordsman Link, and Zelda fights like a mage, so then we placed the tricky Impa to fight from a speed-based perspective.

“Some characters like Impa, Robbie, and Purah debut their younger forms. How were those designs determined?”

Matsushita: It was suggested that we use their appearances and personalities established in Breath of the Wild as clues, then we proceeded in such a way as to avoid any disagreement with the Zelda team on our final designs. In Impa’s case, she has her granddaughter Paya, so we used that as an enormous hint as to how she may have looked.

Nintendo and Aonuma’s Zelda team are highly skilled at presenting fully-formed characters with very few cutscenes or heavy exposition. The Koei Tecmo developers benefited from that and were able to connect the design tropes of a Warriors game with the rich world of The Legend of Zelda, but not with out significant challenge:

Matsushita: Bits and pieces of the personalities and fighting styles of characters appearing in Breath of the Wild could be seen, though fragmentally, through such things as the compendium and memory fragments. Our approach was to use those pieces as clues to how they might have fought in the fierce battle against overwhelming forces 100 years ago, inflating the action-game aspects of those traits. This approach was common among character as well as map and sound design.

Where were the particularly difficult areas of production?

Matsushita: The world of Breath of the Wild is such a complete, high-quality design throughout, so try to bring that world to life in its form from 100 years before, and doing so through the context of a Warriors game system no less, was a challenge from start to finish.  In the end, I hope we were able to find a way that is “the same, while also different” by locking on to the key point of an action game fighting the war of 100 years ago.

Which character was the hardest to make?

Matsushita: There are the characters who are perpetually airborne, or those who are many times larger than Link….. but certainly the most difficult was Zelda. Her personality is pretty far from “mowing down enemies,” so there was a lot of out-of-the-box trial-and-error in finding an appropriate way for her to fit in the heavy action game.

Somewhat ironically, Matsushita points to Zelda as the most difficult character to translate into a player character for a Warriors game, even though she is arguably the most developed. His explanation is on point, though, as Zelda’s story is one of feeling constantly out of her depth, where a Musou game is all about power. The conversation continues from that point to the topic of favorite characters:

Matsushita: Of the Champions, I like Revali the best. While Zelda and the Champions are all unique personalities, I think there are a lot of relatively mature personalities there. But I think his presence gives a sense of expectation that someone will rock the boat a bit.

Hayashi: For me it’s Impa.  Although those who played Breath of the Wild may be surprised at the difference in her appearance and personality… I thought that her calmness might be a dignity gained over many years, and I like the idea that you can feel the depth of her person along with the passage of time over 100 years.

Revali and Impa definitely resonate with a lot of fans. And when a character you always wished you could control suddenly drops on your player select screen, it’s bound to set up a lot of expectations. Issues like balance, believability, and tier ranking are going to come up in discussion circles. However, Nintendo and Koei Tecmo hope that the roster will allow fans to cycle through the play options and find joy in all of them:

“Please share if you were given any advice about character selection, such as, ‘for this play style, you should choose this.’”

Matsushita: In this game you can have multiple characters sortie on the battlefield and switch control between them, so we want players to test out all sorts of characters and find the ones they like. If you choose Link and someone else to challenge yourself, I think you can safely fight with the new character. Since you can always call upon the knight if things look bad (haha).

What’s your impression of how well the supporting cast of Breath of The Wild has been adapted for Hyrule Warriors: Age of Calamity? Let us know in the comments!

Comments
Sorted Under: Breath of the Wild, Games, Hyrule Warriors Age of Calamity, News, The Legend of Zelda, Zelda News
Tagged With: No tags were found for this entry.