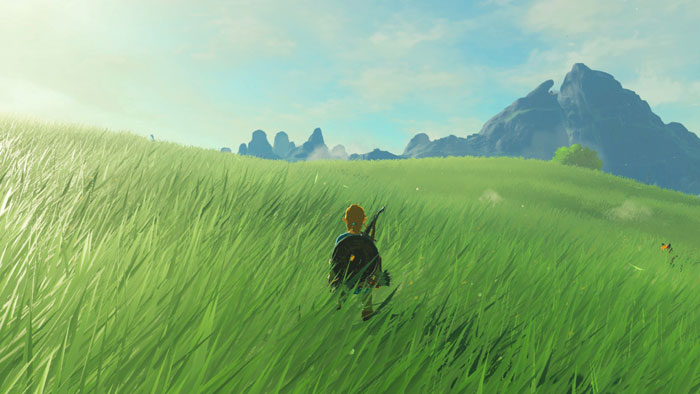 One of Breath of the Wild‘s greatest strengths is its ability to keep players immersed in its massive world. With every area a lush sandbox to explore and with new points of interest always over the horizon, it’s no wonder that Breath of the Wild has been praised for its achievements in game design. The top minds behind the title’s brilliant map and world designs recently shared about the philosophies and goals that drove their work in a new interview published by Nintendo.

In a special interview for Nintendo, art director Satoru Takizawa, lead designer for structures Manabu Takehara, and landscape designer Yohei Izumi discussed their work on Breath of the Wild. Specifically, they revealed the main design philosophies that built the game’s map and environments:

“What was the thought process for all of you during the development of The Legend of Zelda: Breath of the Wild (hereafter, BotW)?

Takizawa: For me, as the art director, I was earnestly thinking about what I need to do in order to create a lively world. In order to increase the sense of immersion for the player — for instance, presenting realistic behavior for the animal ecology, or the changes in weather or a sense of the passage of time — I was continuously thinking about how to use those sorts of things to make the world seem real.

Takehara: In my case, I was responsible for the supervision and creation of all of the buildings in the villages and towns, so I was thinking about trying to realize a world that would feel satisfying for a guest to come visit, a world which doesn’t feel incongruent. There are various kinds of people living in towns and villages,  so even though all the buildings were unlike building designs I’ve actually been to, I tried to think back on my own real-life experiences to give lots of consideration in trying to imbue those designs with an authentic and tangible sense of the sort of lifestyle and hobbies those people have. Although they aren’t spoken of in-game, I wanted to give each village and town a backdrop of some local industry.

Takizawa: In terms of real-life experience, there was a good deal of talk on the development floor about “The sense of adventure from neighborhood mountains” ….  We all talked a lot about wanting to resurrect those real-life childhood experiences like climbing the mountains behind your neighborhood to explore, encountering wild animals and picking mushrooms there.

Takehara: Yeah we did talk a lot about formative experiences, didn’t we? A story I heard from the landscape director when I joined the BotW team was that the grass which grows all over the lands of Hyrule was apparently also proposed from that idea of formative experiences. He said he thought of “grass swaying in the breeze,” and  “the sense of adventure from parting the grass to move forward,” as things which would give a feeling of presence to this world; and also that we might be able to establish one view of a world in which there is a “beauty of nature detached from human activity” even after the calamity.

So then he requested to the programmers, “I just want to have a lot of grass growing!”  And when the landscape director saw how the volume and motion of the grass exceeded his imagination, he said he let out a cry of delight.

At the same time, the planners were also responding to this, and wanted to keep the Zelda-like aspect from past games of items coming out of the grass when you cut it. He was able to apply that in a way that matched very well with the system of BotW, so that in the end it became one essential feature of the BotW terrain.

So from the key word “formative experiences” we associated the concept of grass, which made it possible to place a high volume of it, and that led to a playstyle, and in the end the team was united in making the product. When I heard that story, I felt it is somehow a quintessential episode of the way the Zelda team does things.”

Beyond just the ideas and inspirations that drove their work, the trio also touched on some of the technical aspects of Breath of the Wild‘s developments:

“Izumi: I was in charge of the design for the Shrines and Sheikah Towers, as well as the landscape of the northern regions, but when I heard about the concept at the beginning of production on this project I thought, “How are we going to make a world that vast?” But when I actually started the landscape design work, the programmers prepared an unprecedented working environment for us. Usually the general flow of things if for whatever was modeled by PC gets realized as output in the game, but the work environment of BotW was that we were free to move the land around right there in the game. So we could move Link and make immediate adjustments like, “Let’s make this hill about a meter taller,” with extremely speedy trial-and-error feedback, and we were able to really invest time into gameplay and creativity with the margin produced from that reduction work time. The work of making the continent of Hyrule really felt like playing with modelling clay when we were kids — it was like the various regions were formed by by gradually adding more power and checking it, and the result of repeating that sort of meticulous work over and over was that in the end a large world had been produced, was how it felt.

It sounds like it was quite an undertaking to make such a vast world after all.

Izumi: Yes. At first I was told that “you can climb over walls,” but a landscape designer’s sense of “walls” is “somewhere you can’t go,” and therefore being able to climb them makes what were once “walls” into “paths.”

I thought “that’s about as big a change in work volume as turning a 2D game into 3D, so this is going to be really difficult.”  However, it was incredibly fun to think about things such as, for example, when climbing a high place, where and how should we place rocks in the side of the cliff. Of course it was a long development cycle, so there were difficulties here and there, but we were able to experience the pleasure of overcoming those difficulties and thinking about the playstyle. So it was like the difficulties were steadily being overwritten by the amusement that followed them as we were making it.”

The map creation tools that Izumi described here makes me wish that Breath of the Wild had included map-creation tools for players to use. Hopefully something like that will be included in the sequel.

This interview was conducted as part of Nintendo’s current recruitment process for new landscape / environment designers for work on Breath of the Wild‘s sequel. The company listed two job openings earlier this year, and it seems they are using this interview to give potential candidates an idea of what the job entails.

Were you surprised by anything discussed during the interview? In what ways do you think Breath of the Wild‘s map succeeded or fell short? Let us know in the comments below!

Comments
Sorted Under: BOTW2, Breath of the Wild, Games, News, Zelda News
Tagged With: No tags were found for this entry.