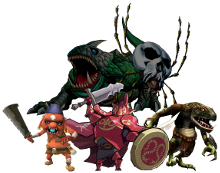 I’ve made absolutely no secret in the past of my love of monsters. I mean, hey, I wrote an entire article about my favorite ones in the Zelda series! Sometimes my favorite monsters are anthropomorphic or humanoid, but in general I prefer my monsters to be pretty bestial.

Why am I getting into this? Well Zelda’s always had its fair share of humanoid foes. Ever since the original game, Darknuts have been a big part of the series… and they’re really just knights who are occasionally jackal-headed for some reason. And there were others too. But even with these humanoid foes present there were always plenty of bestial enemies as well. Far more interesting foes, with creative designs, strange anatomy, and sometimes creative means of fighting them. Ocarina of Time and Majora’s Mask excelled at this, as did most of the handheld games. I think it was around Twilight Princess and Skyward Sword that swordsmen or other kinds of very human enemies and monsters started becoming very common, though it was seen to a degree in The Wind Waker as well.

Oh don’t get me wrong, both games have a ton of totally inhuman beasties as well, but they still significantly ramped up the “human element” in their enemy lists, either in the form of a large amount of different but still very humanoid enemy types — such as Twilight Princess’ Bulblins, Bokoblins, Darknuts, Lizalfos, and more — or in the form of a few heavily recurring and dominant enemies that fight like humans — like Skyward Sword’s Bokoblins and Lizalfos. Both games had a heavy presence of humanoid minibosses as well, particularly Skyward Sword. So there’s no denying that these two games have way more humanoid foes than was the norm in the past.

And, even though I love monsters, I will defend that. Skyward Sword tried out an entirely new control scheme centered around realistic swordplay, so of course there were going to be enemies you simply sword-battle. And while Twilight Princess didn’t really have that control scheme, it pretended it did, just like many other early Wii titles, while still being sword-centric regardless of whether you played the Wii or GameCube version; through Hidden Skills and the like, it was also a sword fighting game more than previous Zelda games. I don’t mind that once in a while, and again, I will defend these games — especially Skyward Sword — for having more of these sword-fighter enemies given what they were trying to do.

That said, it’s time to chill out with all these humanoids and freak out with some monsters again.

I think the enemy roster always looks a lot more interesting when it has a lot of very wildly different-looking foes, and of course you know my preference for beasts, so there’s multiple angles from which I like monster-heavy enemy rosters. Even if Zelda Wii U, by some miracle/curse, still has Skyward Sword’s motion controls or an evolution of them, it would still be good to ramp up the amount of beasts. We got the sword-fighting out of our system in Skyward Sword, so now would be a good time to experiment with those controls against a wider variety of enemies. Using motion controls to exploit natural weaknesses, either piercing shells or armor or perhaps getting past natural weaponry. There’s a lot of interesting enemy designs and fights that could come out of that. Who didn’t think that having a sword duel with a scorpion in Skyward Sword was cool? Let’s have some more of that.

And of course, even without motion controls it’s good to have a wider variety of beasts because that’s still more creative designs and more ways to use your items and abilities as well. It’s just better combat depth, a bigger variety of designs, and… well, monsters!

So tell me what you guys think about the balance between humanoid foes and totally bestial ones, as well as your opinion on how various games in the series have handled this. Do you like monsters or prefer humanoid enemies? Tell me in the comments!